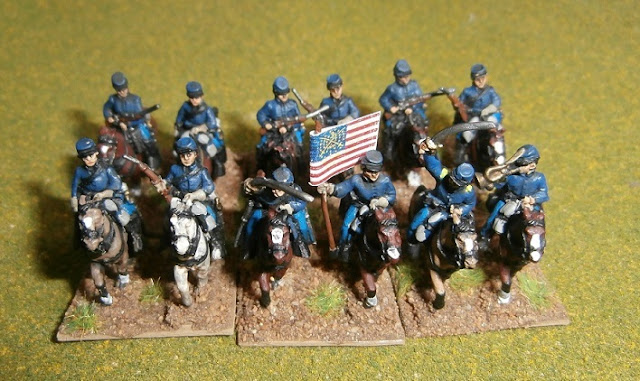 Argh the flag glue didn't stick! Still I'm getting better at the painting.

Couple of the Regiments daring dos!
Taken from civil war index.
In November Co. K made a daring trip. Communication between Grant and Sherman had been cut off by the destruction of railway and telegraph lines, the enemy's pickets extending to Memphis.
Capt. Newell and his company advanced from La Grange to Moscow, made a circuit of 17 miles by night, attacked and captured the pickets at Somerville, and charged through a regiment. Finding the bridge burned at Wolf river, the company plunged into and across the river, and being taken for Confederates, pushed through a brigade and reached Sherman's headquarters at Memphis.

The regiment was engaged at Brownsville in January and Clifton in February. At the latter point Capt. Newell of Co. K and 60 men crossed the river after nightfall in an old flat bottom boat and captured the Confederate Col. Newsom, 3 of his captains, 4 lieutenants and 61 enlisted men, with horses, arms and equipments. The regiment was in engagements at Jackson and Panola in July, and at Grenada in August was in the advance, destroying over 60 locomotives and more than 400 cars -