Donald Featherstone stands large as an important and inspiring figure in the
development of modern wargaming. Such was his ability to communicate directly to
his reader that, as a boy, I came to consider him more as an unmet Uncle. As a mark of
respect to his passing I decided to play a Napoleonic game using his rules, (with
my additions), as set out in his "The Peninsular War" book.
Disappointingly I was forced to use my Olympic "Tough" which is a
great under water camera but lousy for wargame AARs!
The scenario was taken from Charles Grant's book Scenarios for Wargamers. 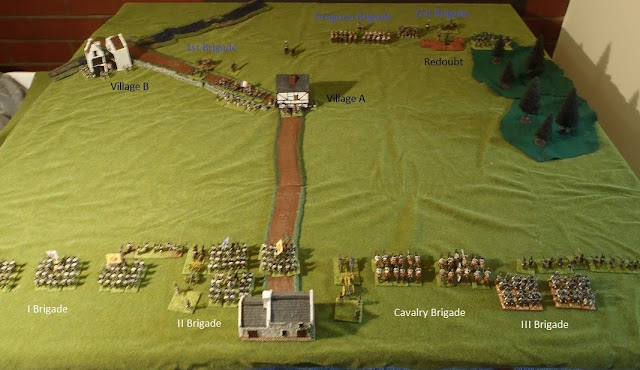 The Austrians are nearest and their mission is to capture two of the three objectives.
Village A, Village B and the Redoubt.
The Austrian Plan.

III Brigade consisting of one battalion of Grenz and two Line to take the woods on the right and then out flank and assault the Redoubt. 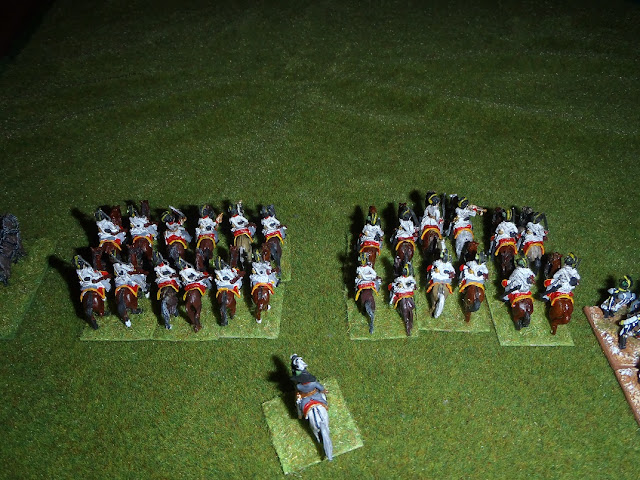 They will be supported by the Cavalry Brigade. 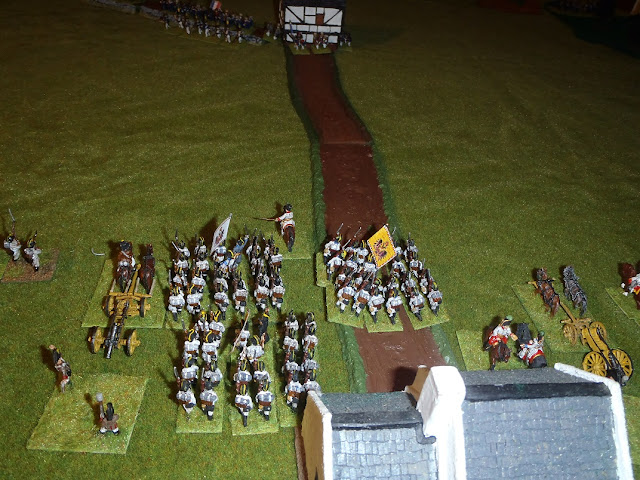 In the centre the II Brigade will soften the defenders with
Artillery fire before beginning the key attack on Village A. 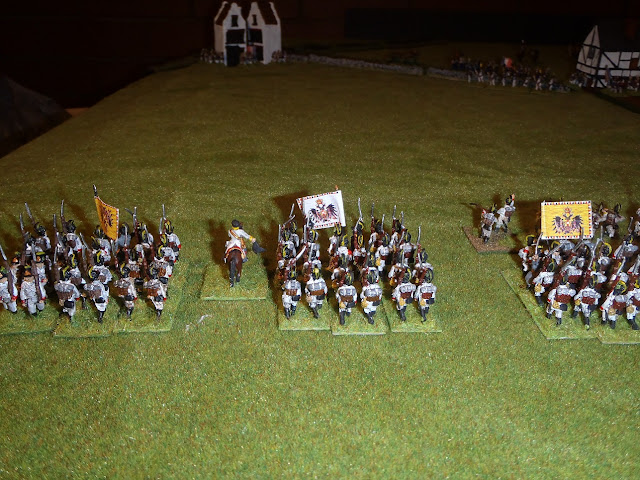 Finally the I Brigade will begin the final attack on the left. Its objective is Village B.

The French 1st Brigade defending the two Villages with three infantry Battalions,
some skirmishers and a Battery of 4 pndrs.

The French 2nd Brigade of two Infantry Battalions, one of which is skirmishing,
and a battery of 8 pndrs holding the Redoubt on the Austrian right.
In reserve the French have a Brigade of two Dragoon regiments. 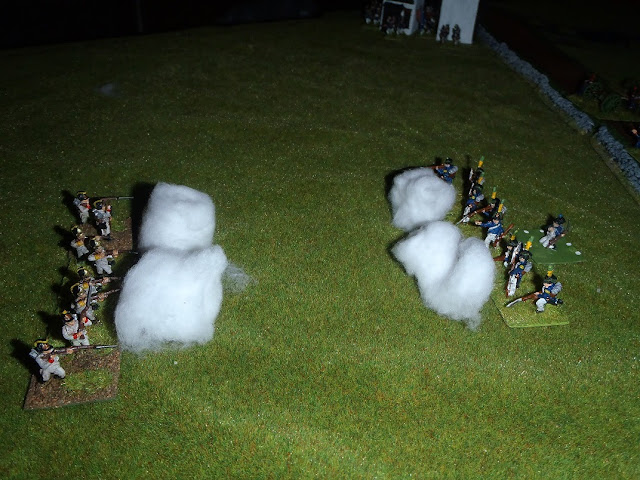 The skirmishers engage in front of Village A with the inexperienced
Austrian 3rd rankers managing to draw first blood! 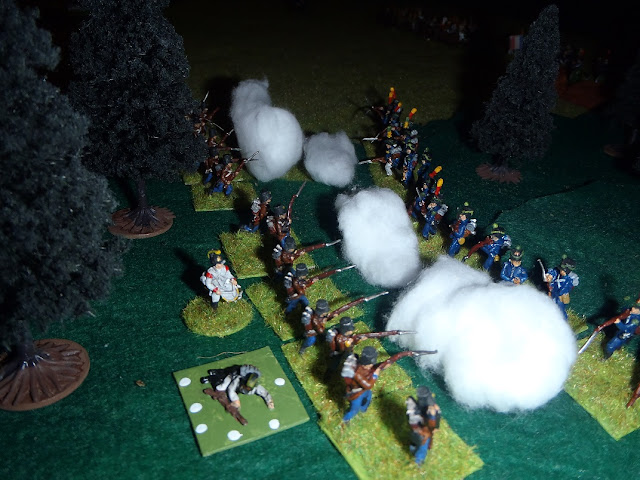 An intense running battle begins in the woods with the closest Grenz unit having
taken a moral loss and disorder from French Skirmish fire. 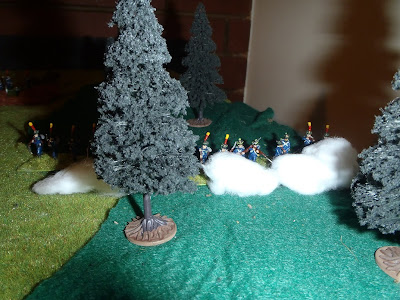 Eventually the French manage to clear the woods of Austrians. 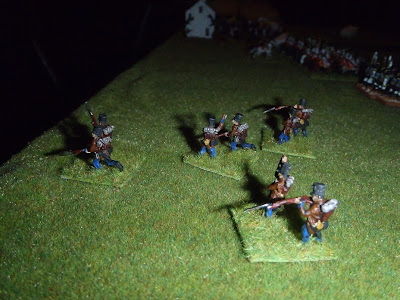 Routing some of the Grenz. 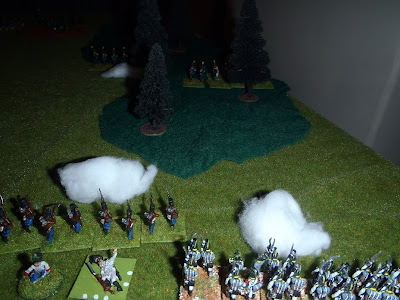 But the Austrians counter attack and push the French back again. 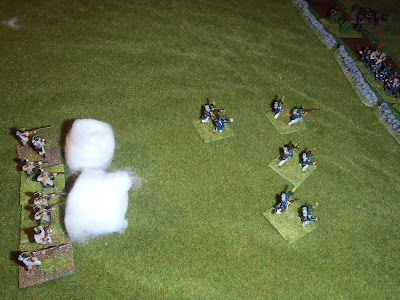 Meanwhile in the centre the unfancied 3rd Rankers have routed the Voltigeurs! 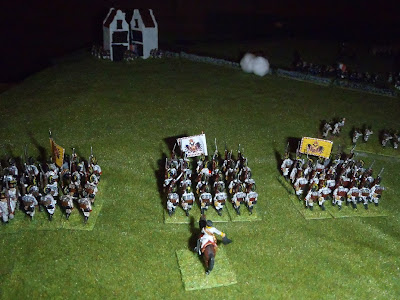 With the right flank and centres both held the Austrians begin their attack on the left. 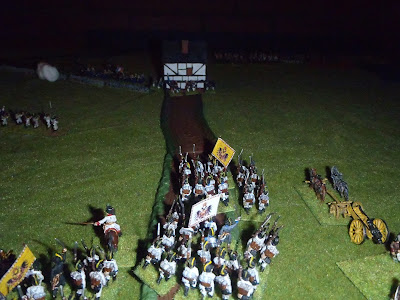 The Austrian Centre begins to move down the road and begin their assault on Village A. 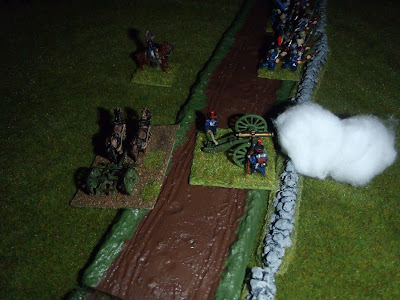 The little 4pndrs begin an effective fire that forces one Battalion to retire. 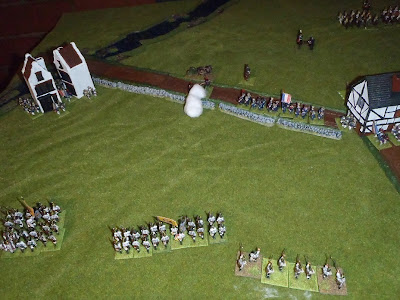 The Austrian I Brigade advances towards Village B. 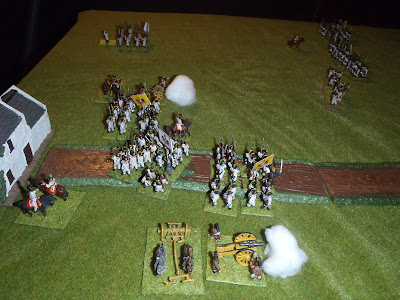 The Austrian Batteries giving supporting fire to the infantry assaulting Village A. 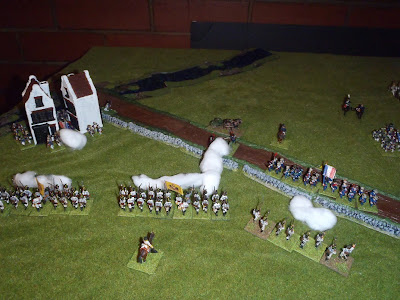 The fight intensifies on the left. 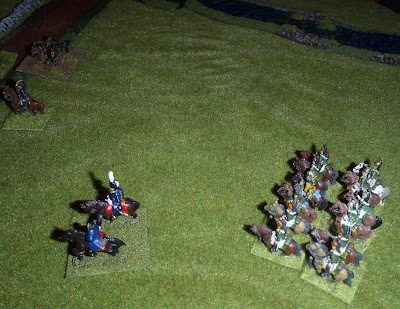 With things looking shaky the French send a Dragoon regiment plug any gaps. 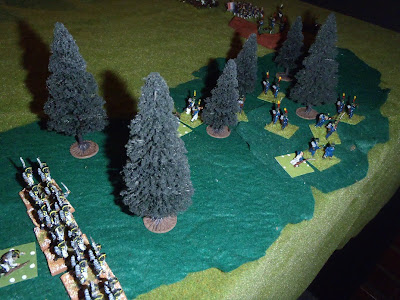 The Austrians finally win the battle for the woods. 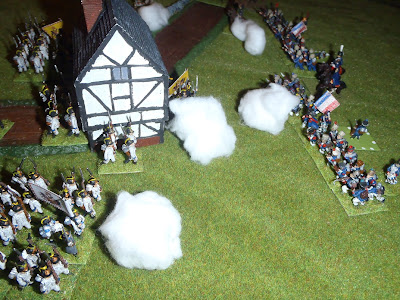 At the same time the II Brigade force the French centre back and capture Village A. 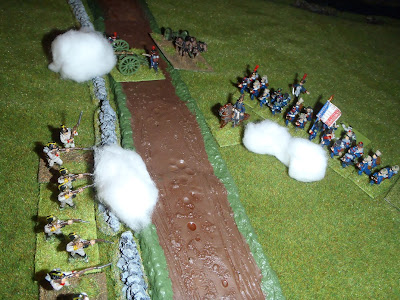 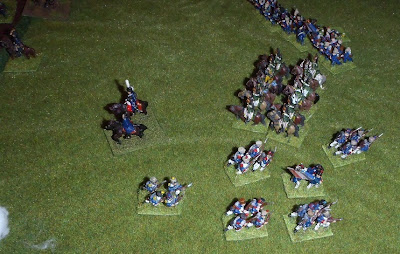 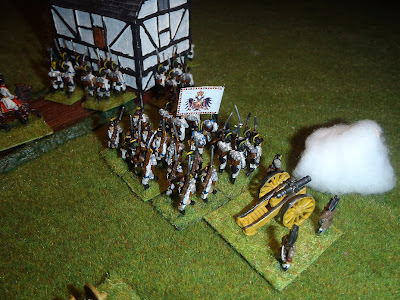 Austrian Artillery moves up next to an infantry square and begins to lay fire on the French Cavalry. 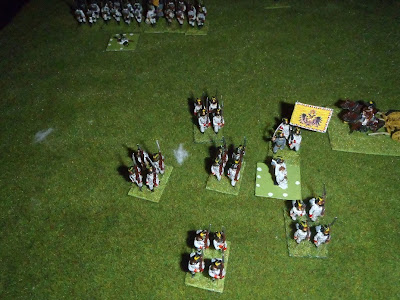 A battalion on the left routs after attempting to charge the guns. 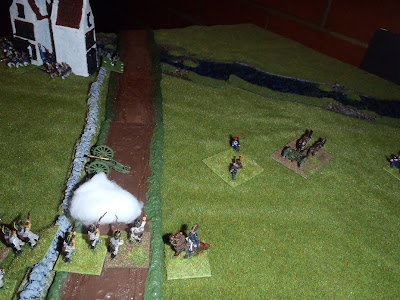 The 3rd Rankers turn and shoot point blank into the 4pndrs! 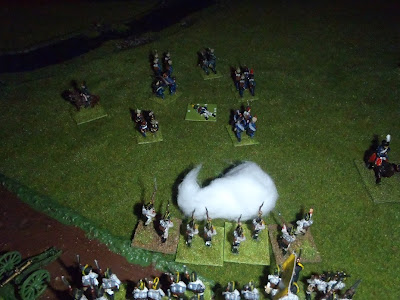 The Leger also finally rout. With only two turns left. 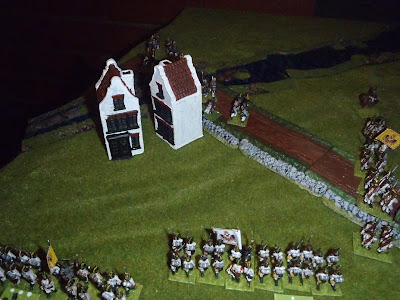 On the final turn. 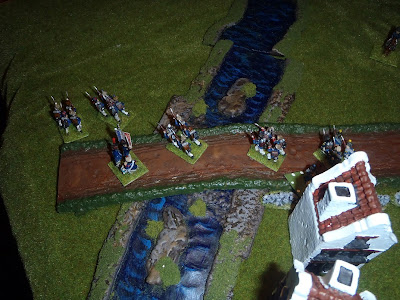 The French rout from Village B giving a last minute victory to the Austrians.
It was an exhausting and enjoyable game.
Tactical lessons. The Austrians probably could have moved earlier in the centre. The French should have used their cavalry more aggressively and moved their 4pndrs out of danger!
Incredibly the Austrian 3rd ranker's where the first unit shot at, routed the Voltigeurs, the 4pndrs and the Legeres and never took one moral loss for the entire game!
I will probably give these rules another run but with the addition of an evade move for skirmishers.