A road test of the "From Shako to Coal Scuttle." Beta rules.

Using the #9 Neil Thomas Scenario and my new ACW armies. 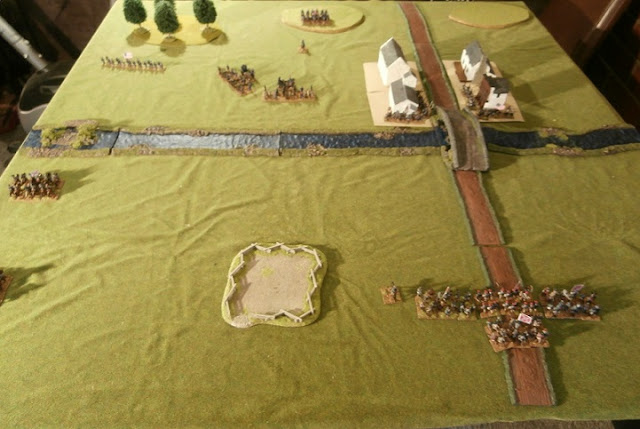 There is battle brewing to the North and the Confederates need to secure the Town and send two Regiments up the road.  The Federals just need to stop them but will be ordered to send troops north periodically during the game.They are defending a river with two crossings.
A ford on the left and a stone bridge near the town.

Union Left. Two Regiments defend the Town supported by a battery of 12pndr Napoleons.
On the hill in the distant rear is a regiment of US Cavalry acting as a reserve. 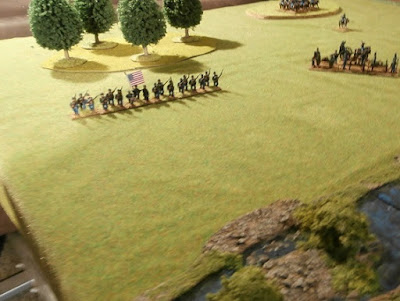 Union right. Defending the ford is an Infantry Regiment and a battery of 6pndrs.

With the Louisiana Tigers in the lead the Confederates send 4 Regiments against the Town.
Two shock dice allow some double moves. 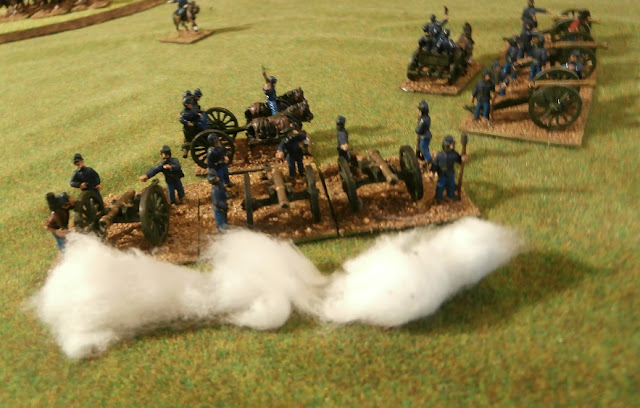 The 6 pndrs open up on the two Cavalry Regiments rushing towards the ford. 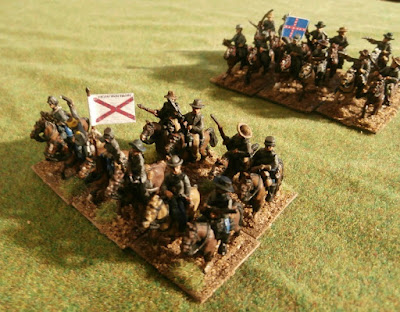 The 7th Alabama takes loses but is supported by the 1st Arkansas. 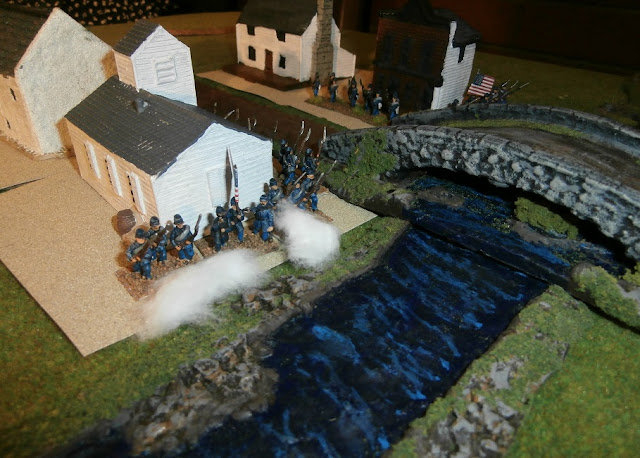 Accurate rifle fire from the Union defenders forces the Louisiana Tigers
to pull back down the road! 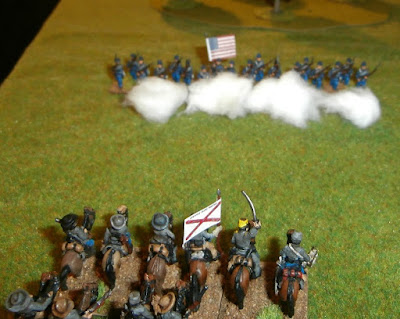 The 7th Alabama is greeted by volley fire as they cross the ford. 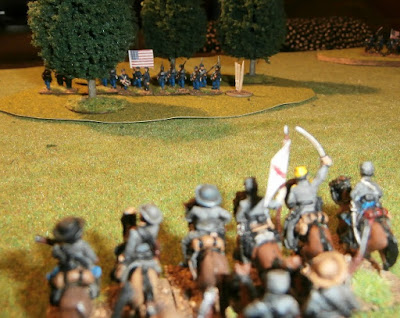 The Alabama Cavalry charge the Federal infantry Regiment who skedaddle into the woods. 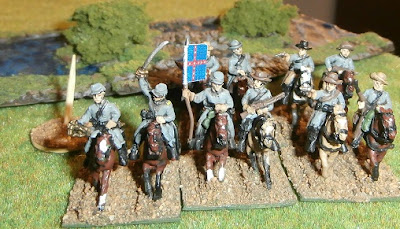 The 1st Arkansas also cross to the North bank of the river. 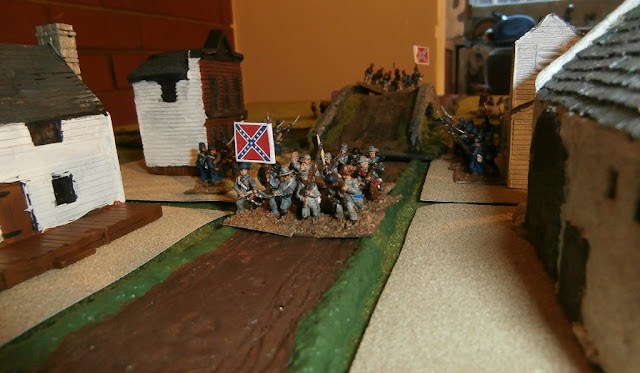 A depleted Confederate regiment manages to break into the Town! 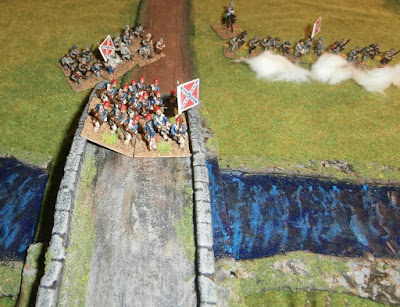 The "Tigers" attempt to follow as the 2nd Virginian Regiment provides covering fire. 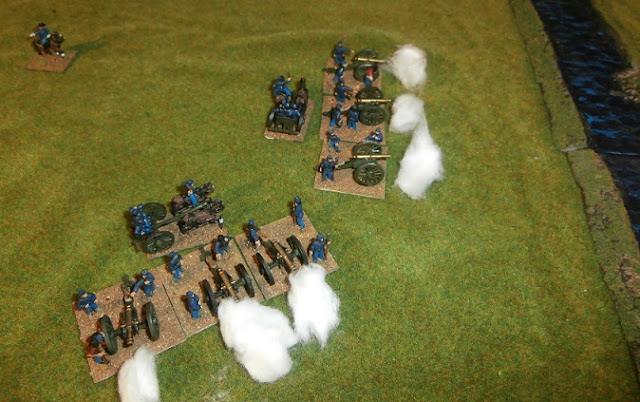 The two union batteries who provided amazingly accurate support throughout the game. 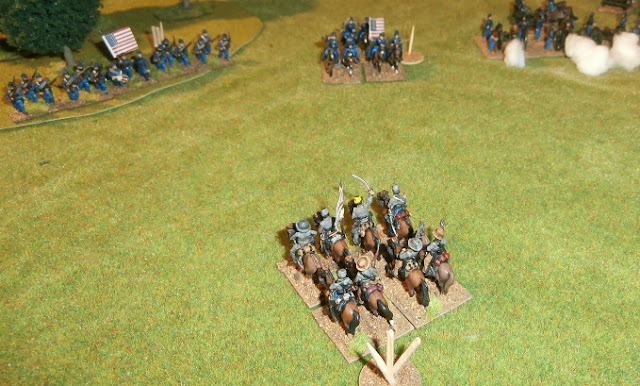 The Federals commit their cavalry reserve who charge the Alabamians and
throw terrible dice loosing half their strength and rebound. 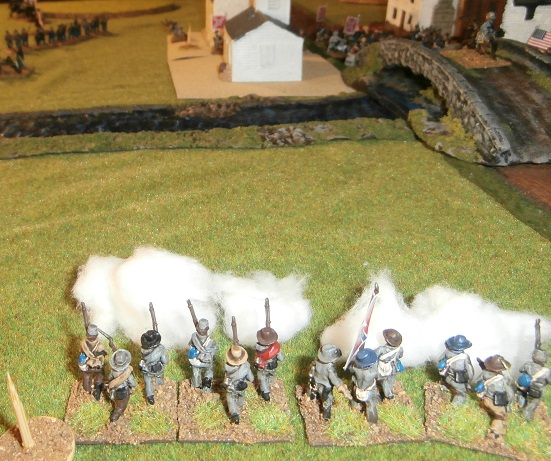 The shooting from the 2nd Virginians is so hot they force the Union troops
to temporarily abandon the Church yard. 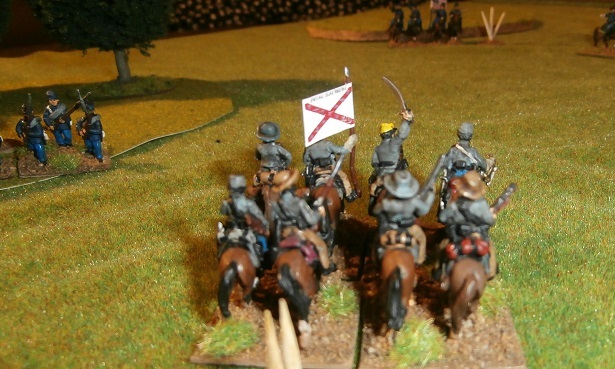 The Alabamians charge the US Cavalry and again win the fight. 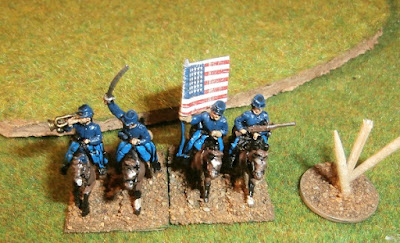 The US cavalry is reduced to 2 bases and both are stunned! 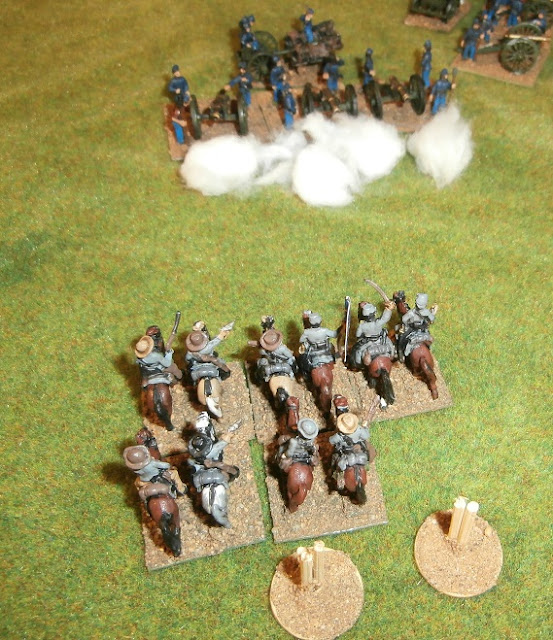 Same too for the 1st Arkansas who have all 5 bases stunned by the 6pdrs guns. 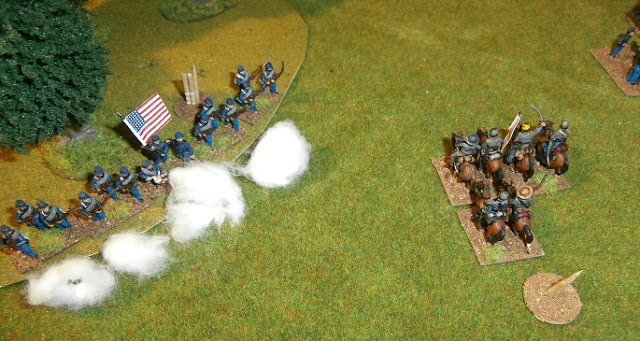 And  Alabama's  finest have also have all of their bases stunned as well.
All three of these cavalry regiments will be forced to rally back! 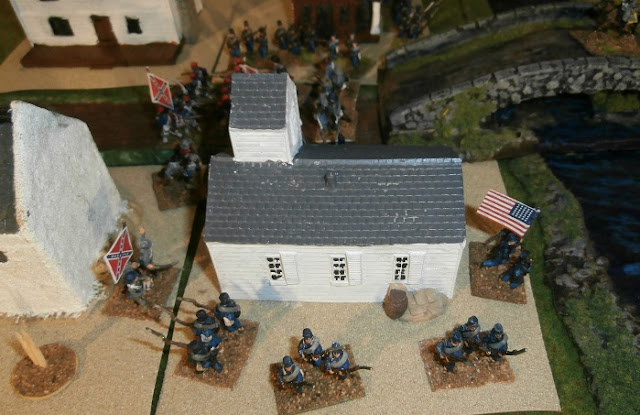 The Federals have managed to reoccupy the Church. 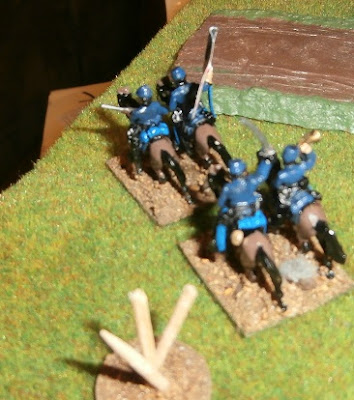 Required to send a unit of reinforcements North by the scenario rules.
The Union send their much depleted Cavalry. 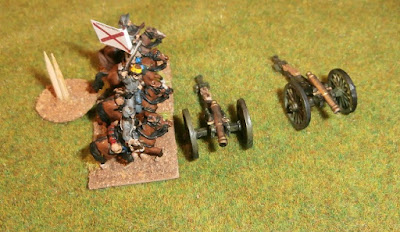 Meanwhile the half strength Alabamians manage to rally enough bases
to charge the 6pndrs in the flank and run over them.

Mean while the  1st Arkansas has rallied back south of the river
trying to loose some of those stunned markers! 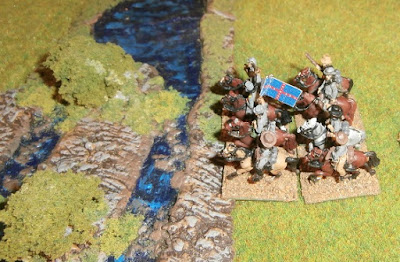 Rested they head back to the fight. 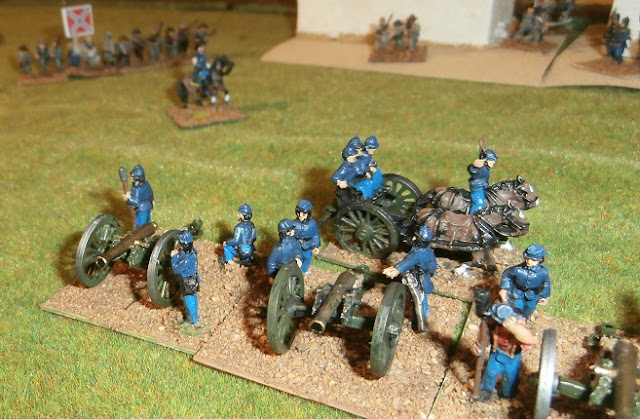 With Cavalry on their flank the 12pndrs swing round to engage the Confederates.
In the background, though, can be seen some Rebels who have managed to pass
through the Town and are heading towards their rear. 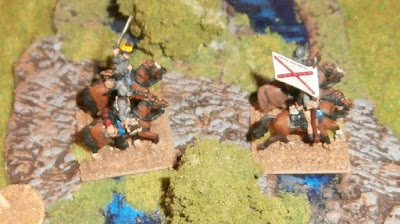 What's left of the 7th Alabama finally rout after being hit by 12pndr cannon fire!
But they defeated a 6pdr battery and a Cavalry regiment before calling it a day! 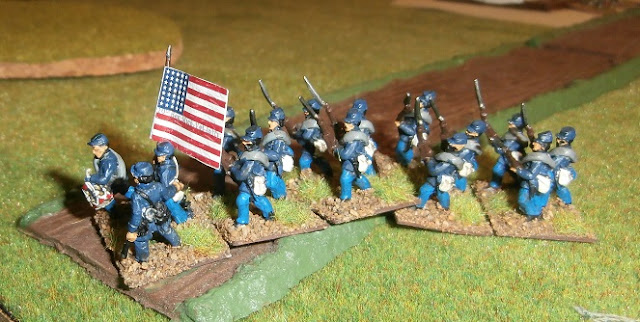 With another withdrawal ordered and the Town being a vital
objective the Union sends the regiment from the ford.

The 12pndr Napoleons are charged from the rear! 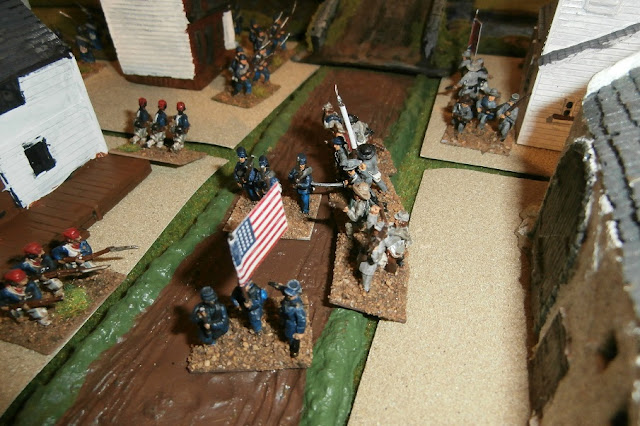 Street fighting in the Town. With the second last Federal Regiment routed and
another withdrawal required next turn its all over for the Feds who only hold the Shop.

The Confederates win. Though all of their Regiments are worse for wear!

Man of the match has to go to the 7th Alabama Cavalry Regiment. They crossed the river first,
pushed back an Infantry Regiment, chased off the US Cavalry and wiped out a battery of 6pndrs!

"From Shako to Coal Scuttle." Beta rules.
By Ivan Sorensen
These rules are intended for the Waterloo to Mons period and have their needle
firmly set in the fun zone of the realism V playability argument.
Did I enjoy using them for this game?
Yes I did. They were easy to pick up and gave me the right flavour for a ACW game.
What I like about them.
These rules are fun to use and have plenty of new ideas
There is an easy combat mechanism which gives you results instead of going through 3-4 steps like some rules do. So you might take casualties, lose moral and be forced to retreat all from one throw of the dice.
You accumulate "Stunned bases" from action. (You could call them fatigue or disruption or moral loses.) These slowly reduce your combat ability over and above casualties taken. If not rallied eventually your Regiment will retreat on its own accord!
Command dice. Some allow you to rally, some to charge or move faster. They give you decisions to make and allow for different efficiencies of Command.
Finally the game is very robust and has tolerated my fiddling with out loosing its style!
What didn't suit what I wanted.
The turning rules are a bit too free and easy though I applaud their simplicity. I introduced one tweak and am very happy with the results.
The command ratings are based at the Army level. I want different Brigade and Divisional commanders for the ACW because it has always struck me as a character driven war. I think I have managed to shrink the command dice allocation down to Brigade level.

These rules ares till in the Beta stage and are available from the Wargames Vault.
http://www.wargamevault.com/product/176031/From-Shako-to-Coalscuttle-Beta-rules?src=slider_view