Day 9 the power went and didn't come back. Things began to get quieter during the day too.
Passing cars became less frequent. The occasional yell or scream and sometimes a gun shot.
In the distance sirens and muffled explosions. By Day 12 Marge's angle had healed up Peter suggested they try and collect what they could from the local  shop in the next block. Before others clean it out. The Plan. Annie would stay in the house and cover the others with her rifle while Pete, Marge and Bobby would dash over, load up and get back. 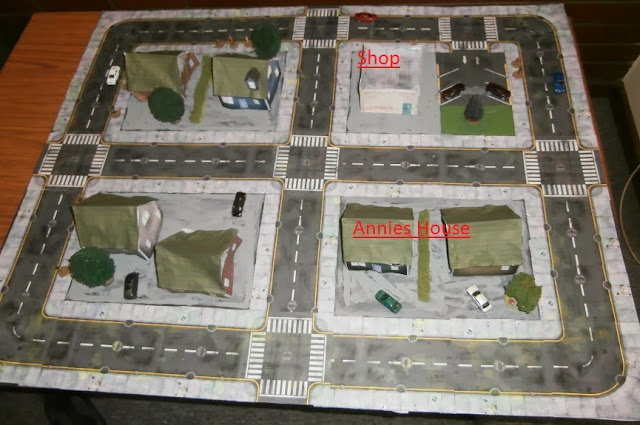 The shows the short trip from Annie's house to the shop and back. Again the cars on the road represent PEF's or random friends/enemies. 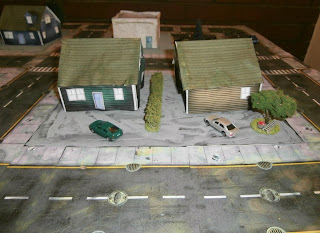 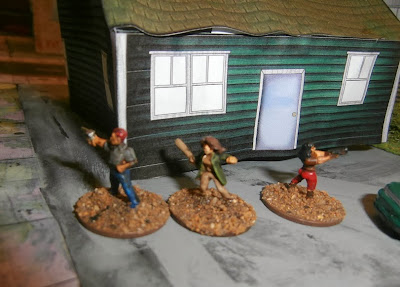 Pete Rep5 with revolver leads out Marge Rep4 pistol and baseball bat and Bobby Rep2 with pistol.
They have been to this shop before and there was a Zed inside. But they killed it. 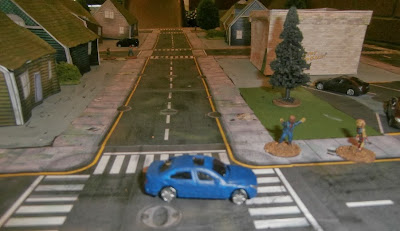 The first PEF car is spotted and turns out to be driven by citizens.
Good luck maybe they can be convinced to join our group. 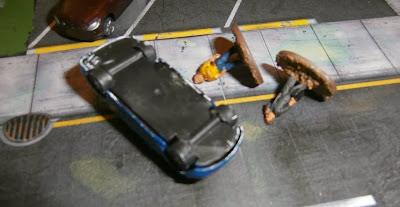 Unfortunately the car is mobbed by nearby Zeds and the driver manages a double fail.
The resulting major crash knocks his friend unconscious. 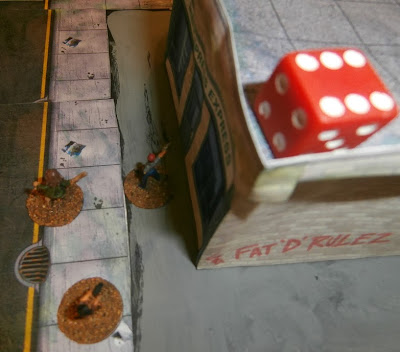 Pete opens the door of the shop. Its full of Zeds! Run! 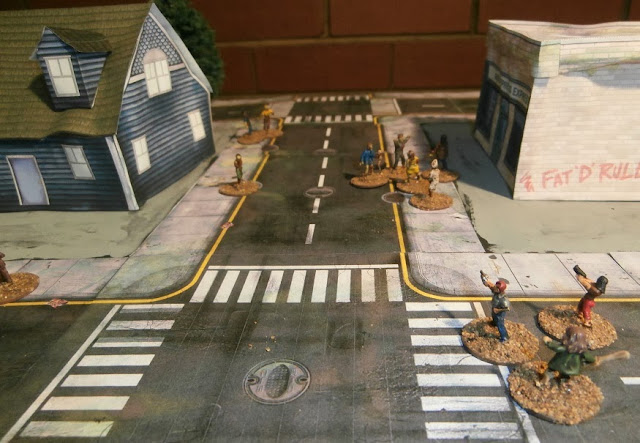 The group retreats back towards the house shooting as they go.
This attracts more Zeds from other directions. 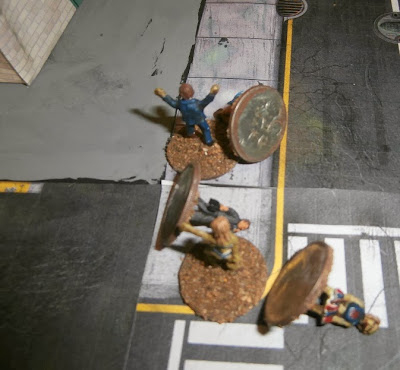 Meanwhile the man picks up his unconscious friend and makes a run for it.
Unfortunately he's too slow and is cornered and over whelmed. 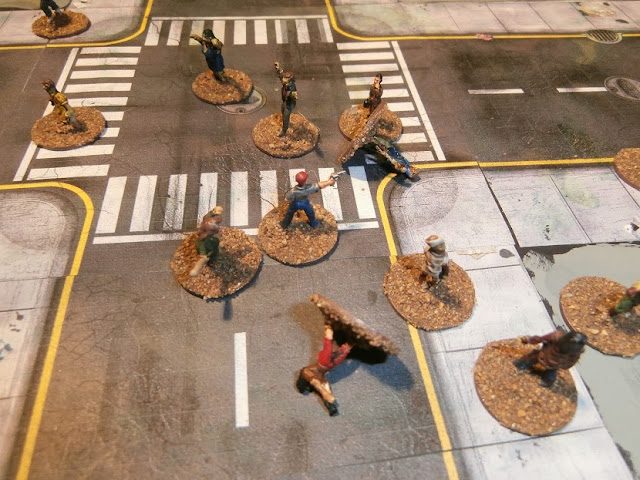 Things are starting to look desperate at the cross roads. Bobby has tripped over and the group is nearly surrounded! 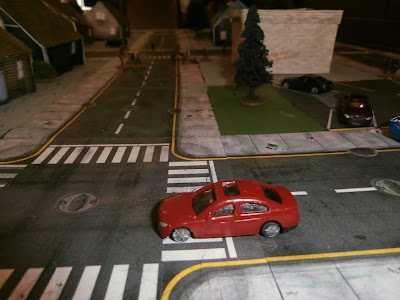 Another PEF car has two citizens. 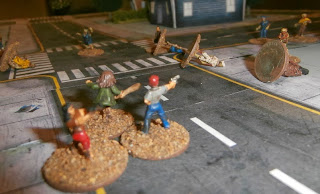 The group continue to pull back.
With the help of covering fire from Annie's rifle in the house. 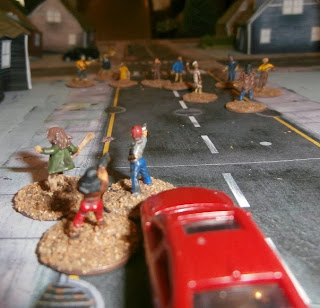 The citizens turn down the road and offer them a lift. 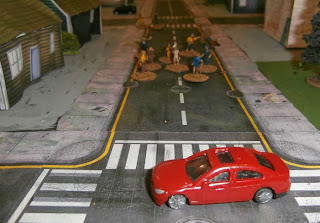 Reversing out they get mobbed. 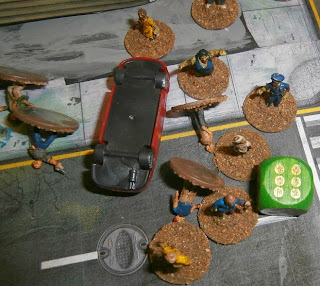 The driver manages a double fail and the crash knocks him and Bobby out.
The Zeds are straight on to them! 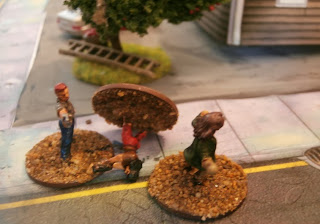 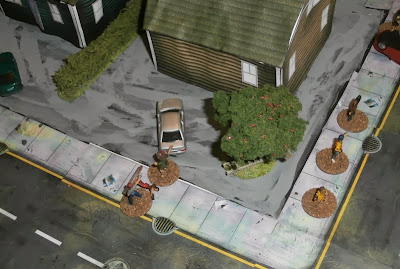 The group continue to escape hoping for kind initiative roles. 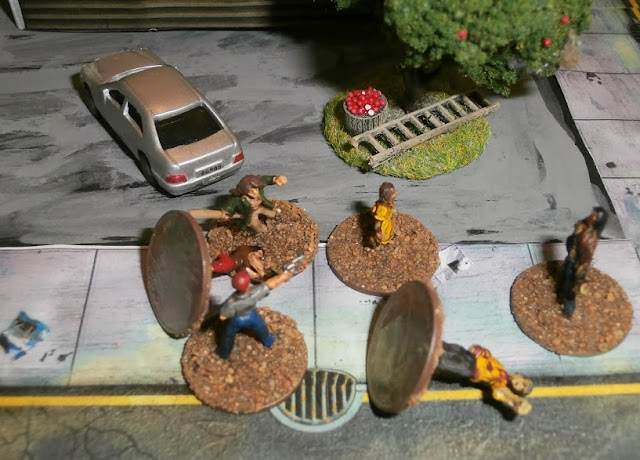 The Zeds catch the group and Pete and Marge desperately try to defend Bobby from being eaten. 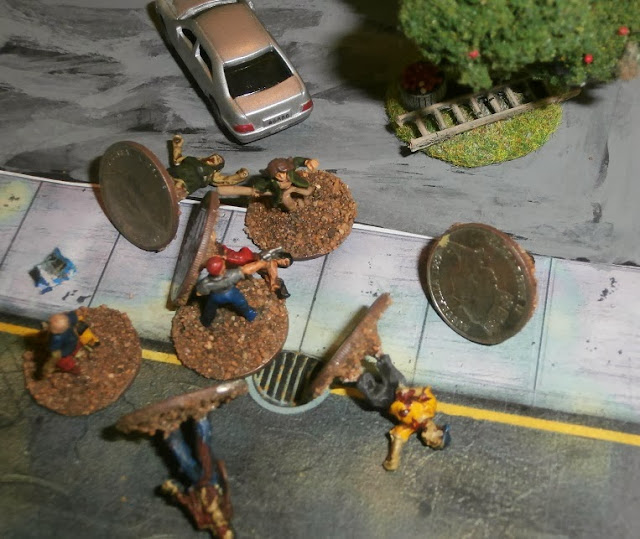 Surrounded they keep winning the fights but the Zeds get back up again and again, 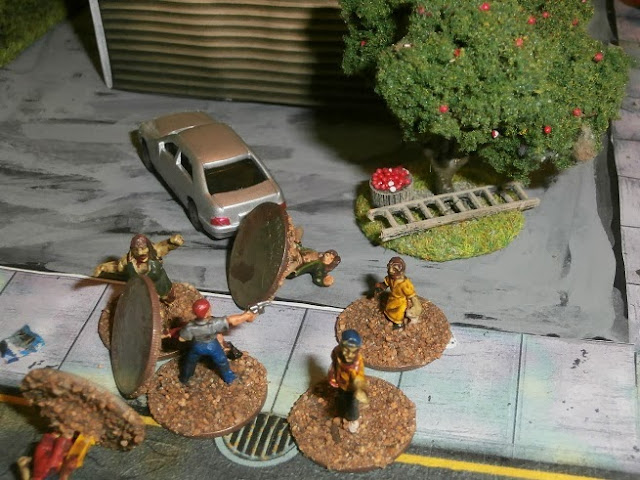 Then Marges weak ankle gives out! 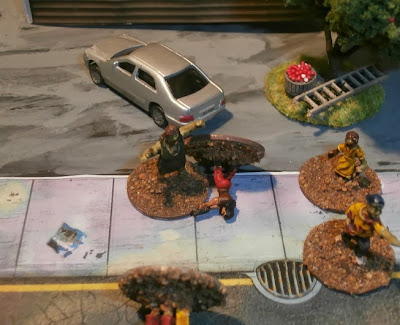 Pete makes a choice. He grabs Marge and helps her to the house.
The Zeds now fall on the defenceless Bobby beside her own apple tree.
(Bobby was originally Annie's neighbour.) 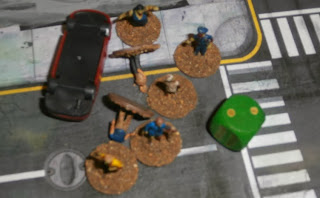 Another group have nearly finished feasting on the citizens. 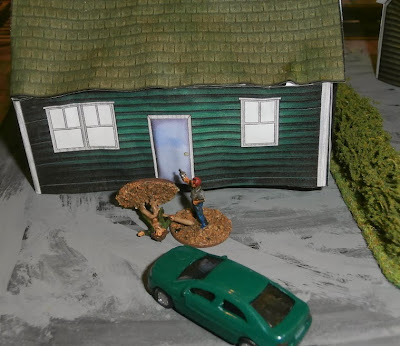 While they are all distracted Pete and Marge sadly sneak back into Annie's house.
It was pretty sad loosing poor Bobby like that. Also with the group down to 3 they might go under in the coming weeks. We'll see. But it now looks like the Zeds have taken over the streets.
Posted by David Cooke at 22:40