Some of the gang have new outfits! 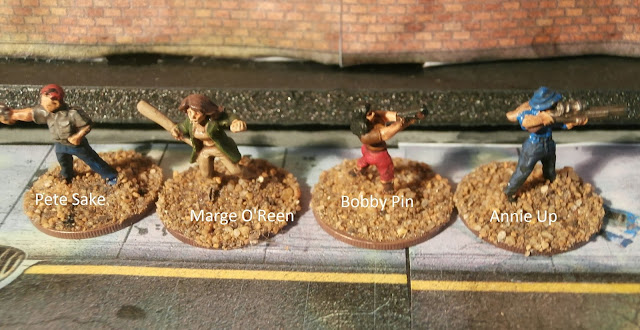 This is the little gang of people trying to survive the sudden onset
of a Zombie Apocalypse in their town of Bodge City.
There's Pete the leader Rep=5 armed with a Magnum and knife.
Marge a work mate of Pete Rep=3 with Baseball bat and Pistol.
Bobby Pin neighbour of Phil (dec) and Annie Up Rep=2 Pistol and knife.
Annie Up wife of Pete's work mate Phil. Rep=4 Rifle and knife.
The reports and how they have got this far can be seen
here Day1  here Day 2 and here Day 5 .
Why are most of the group female?
Because the guys keep getting their brains eaten! See the earlier reports.
Day 7. The media reports are getting  worse not better. Most of the attacks in the North Eastern suburbs though the CBD now resembles a war zone. Government announcements are telling people to stay in doors, if possible. The TV specials show the National Guard cordoning off the most infected areas while people riot and loot all over town. Peter and the others decide that getting to one of the stores in the south of the city before they all close would be a good idea. 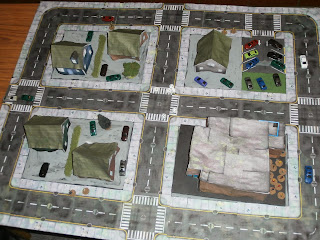 The Plane. Drive in from the west.
Fill both the cars up with supplies and head back to Annie's place. 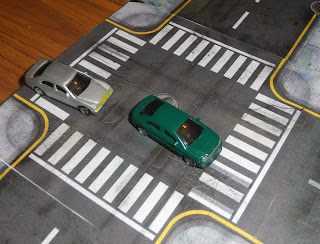 Marge and Pete in the green car followed by Bobby and Annie in the silver. 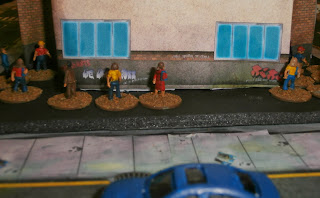 Already a large group of people trying to get into the store. 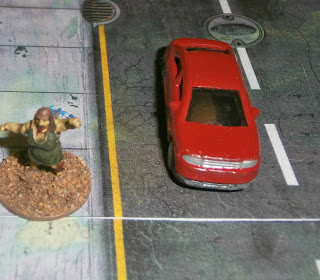 The other cars driving around represent random groups. Could be friendly could be unfriendly. 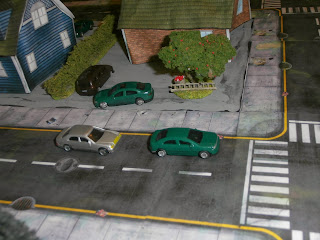 As group approach they can see there's no parking spaces left  near the store.
They'll have to park and walk. 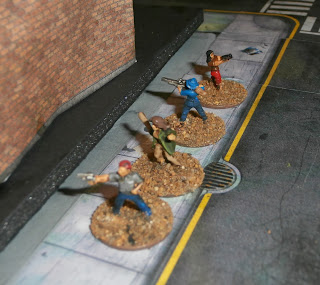 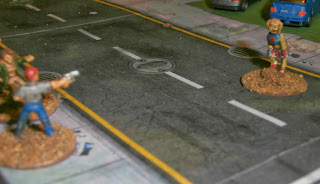 From amongst the parked cars comes a shuffling and moaning figure!
Peter guns it down. 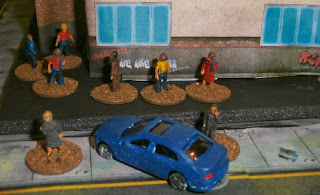 One of PEF's is resolved as this well dressed pair. 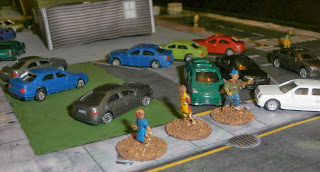 The gang manage to get inside the store.  Meanwhile across the road some Zombies have gathered. 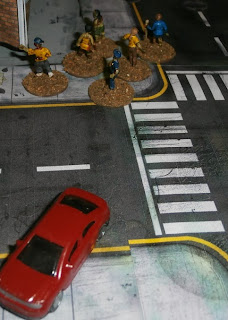 Further up the street a small herd has formed. The team pick up some fuel, medical supplies and some much needed spare ammo.
Loaded up they then make a bee line for the cars.

The Cops (Sgt Plodd Rep4 and Con Bleu Rep=4) turn up after reports of Peters gun fire earlier.
They run straight into the Zombies. 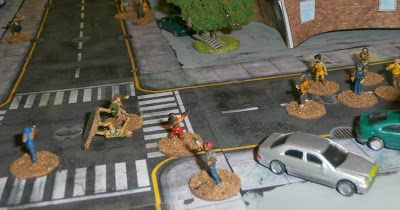 Faced with the choice of getting in the cars and being mobbed the gang decide to clear the Zombies away first. Unfortunately the small herd comes their way and things start to get a bit sticky!

Meanwhile the Plodd and Bleu are fighting off bigger and bigger numbers of Zombies. 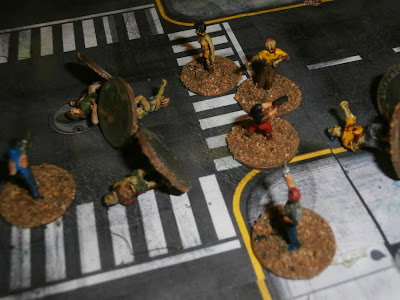 The Herd hits and in the confusion of the fight Marge does an ankle! 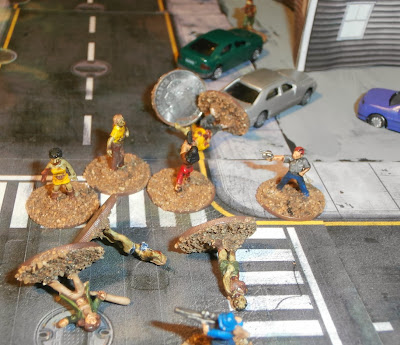 The fight continues with the team desperately trying to protect Marge who's out of the fight. 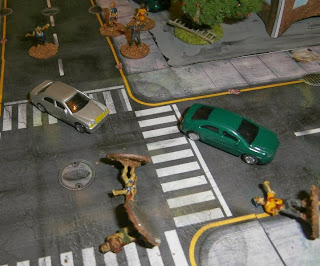 The opportunity comes and the team get in the cars and reverse out. 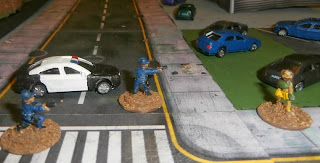 Meanwhile Plodd and Bleu are approached by a single Zombie cheerleader who they fail to hit. 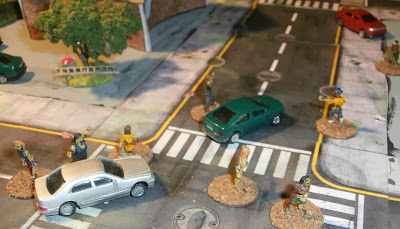 Its hair raising stuff as they race through the crowd of Zombies. 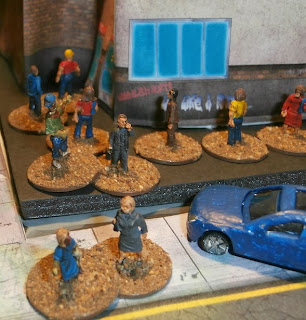 Meanwhile the Zombies have found the crowd outside the store. 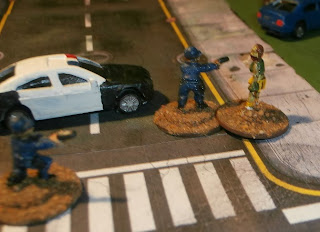 A panic shot by Sgt Plodd misses and the Cheerleader's on him. 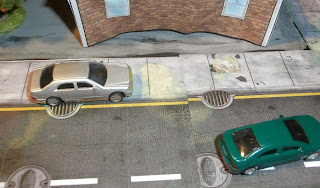 Annie mounts the kerb while trying to avoid the Zombies!
She's always cool in a crises!
The group was able to escape with out incident after this. I needed to see what happened to the other characters. 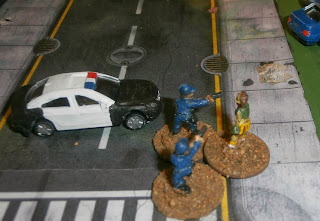 Con Bleu draws his stick and attempts to help his Sgt. 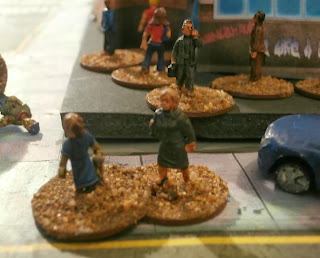 The Business pair keep winning their fights with the Zombies! 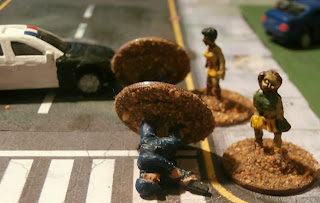 The Cheerleader takes both of them down!! And a her BFF comes along to help feast. 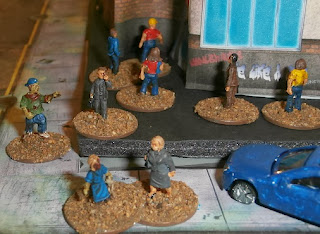 The Business pair as I left them. After winning so many fights I'll think I'll name them
Andy and Mandy.
Well a successful shop.
No food but other goodies including some we didn't have, medical and ammo.
And for the first time no one got killed!
Posted by David Cooke at 23:47