A small fictitious engagement set early in the 1809 campaign between an Austrian Avant-Garde Division spearheading its corps and a small French Infantry Division trying to delay them long enough for their Corps to escape.
Austrians: 3 Grenz Battalions (second rate), one Hungarian Battalion (second rate), 3 Large Infantry Battalions, a Uhlan Cavalry Regiment, a Hussar Regiment(Elite Moral) and a Horse Battery. The French: have 6 Line battalions, two combined units Skirmishers, one regiment of Chasseurs and an 8pndr battery. French must delay the Austrians from crossing the river for 9 turns to win.
Rules were  Black Powder with two pages of changes.
This is my first Battle report and I'm interested to see have it comes out. 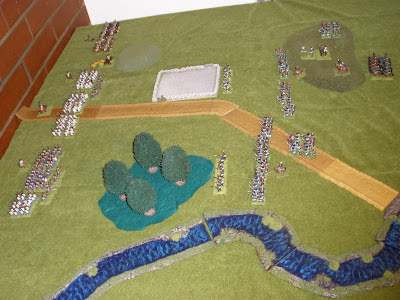 The Austrian General is on the left and the crossing he needs is on the bottom RHS. He has concentrated his cavalry on his left flank and the Grenz and Hungarian Battalions on the right flank preparing to use the woods to mask their advance. 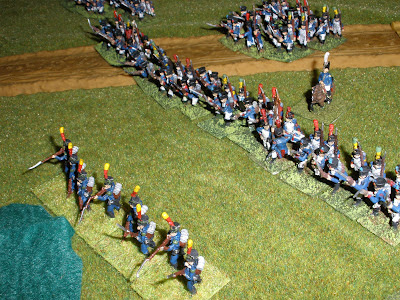 The French 1st Brigade form up near the river, the voltigeurs are preparing to enter the woods.. The General and some of his troops are Essex figures celebrating their twentieth birthday this year. 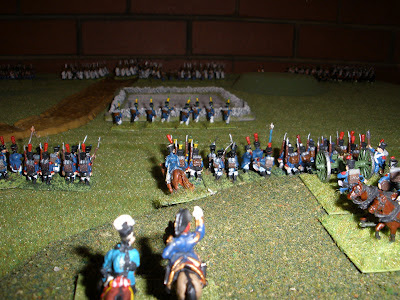 ﻿The French General Division sets up beside his Battery on the dominate hill. The Austrians barely visible in the gloom. 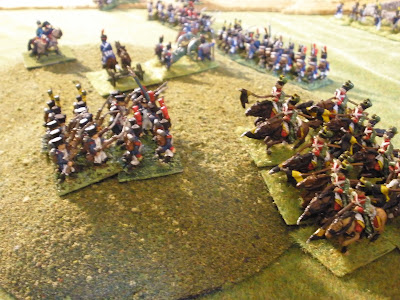 A careless order to advance given to the Austrian Cavalry Brigade resulted in them tearing across the battlefield leaving the Uhlans just short of a French Battalion but without a charge order. Their Hussar comrades have meanwhile travelled even further down behind the French right flank. 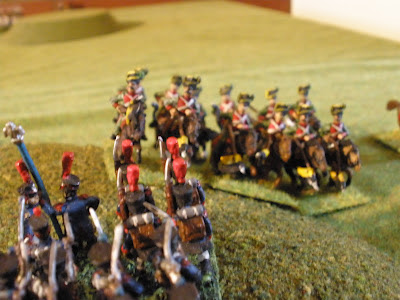 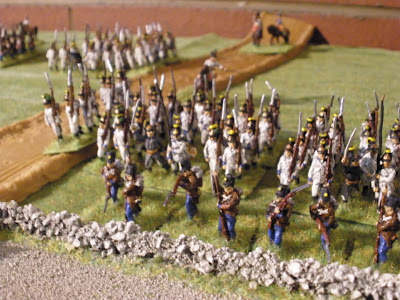 The large German Line Battalions advance in the centre preceded by Grenz Skirmishers. A staff mix up has left one battalion behind leaving a dangerous gap in the centre. 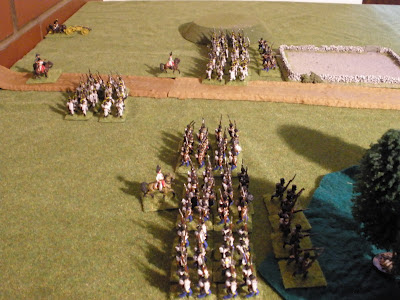 The Austrians after turn one. In the far distance can be seen the Horse artillery heading the wrong way. Yes they rolled a blunder first time! 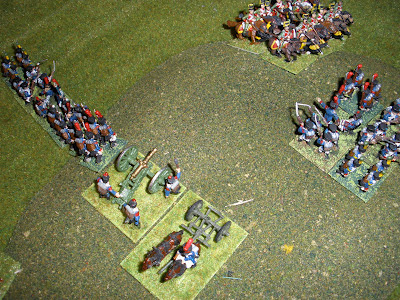 The French react to the sudden cavalry flanking move. The right flank Battalion forms square as the artillery and another one swing round. The fire they are able to concentrrate on the Uhlans causes them to become both disordered and shaken  and in the following break test they retreat Demoralised. (Demoralised is one of my additions to the rules.) 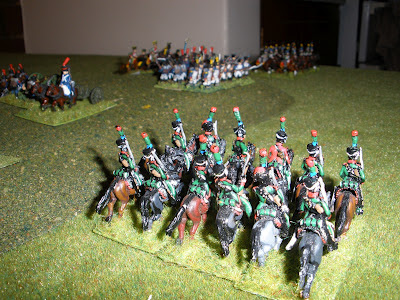 Meanwhile the French Chasseurs start to move up in support. But not very quickly, I think they must be a bit nervous about being squished between lancers and Hussars. 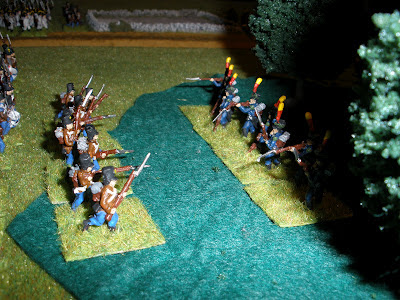 The left flank voltigeurs have managed to ambush some Grenz. 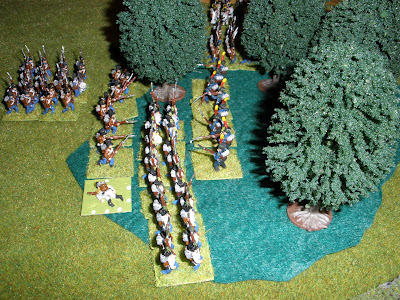 The Hungarians muscle their way past the Grenz and charge the French Skirmishers who run away. 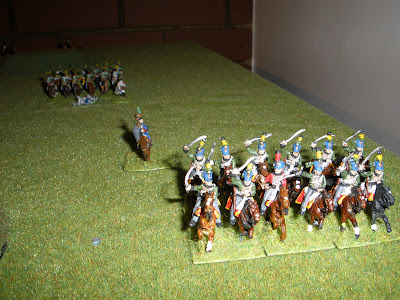 The Austrian Hussars now become stricken with indecision as their Uhlan comrades run off. 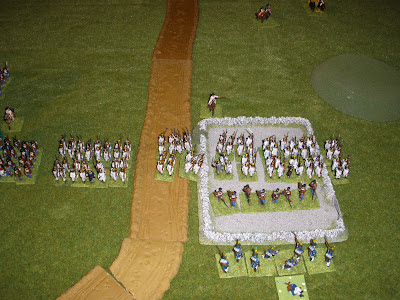 The lone French Voltigeurs in the centre taking casualties but are causing the Austrians a headache. 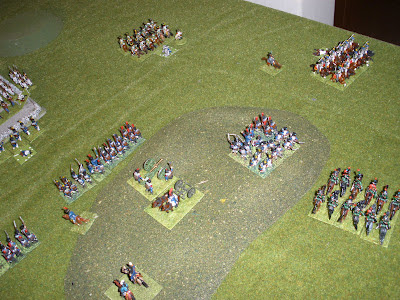 The Hussars have become shaken by the casualties taken from the 8 pndrs and the near by square. This flank has gone from a strong one for the Austrians to a disaster in the making. 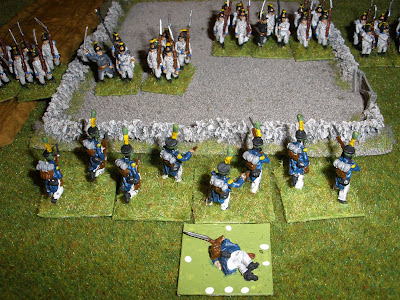 Frustrated, the Grenz charge the annoying French Voltigeurs. The French prove to be tough fighters and the Grenz become the first unit to rout off the table. 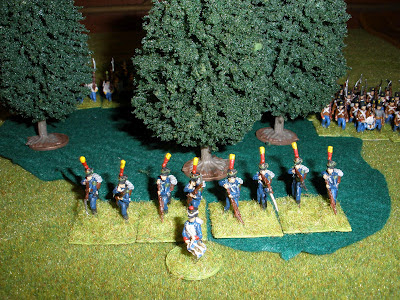 Meanwhile the other Voltigeur unit comes running out of the woods with the Austrians close behind. Note drummer disorder marker. 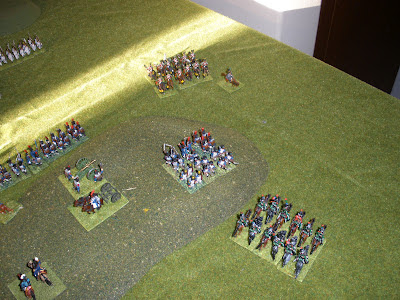 The Hussars can't take the mounting casualties any longer and rout from the table. 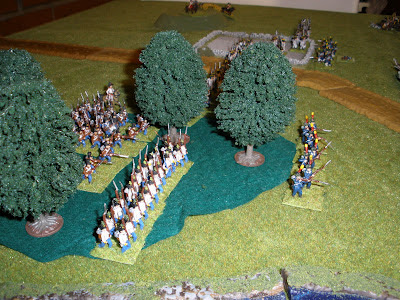 The Hungarians begin to emerge from the woods. 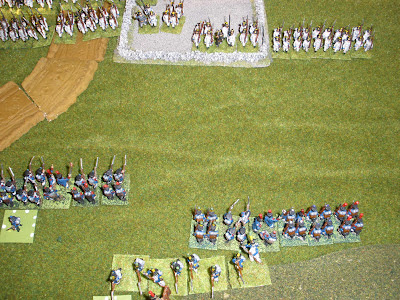 At last the Austrians have cleared the Voligeurs away from the centre. The Uhlans while trying to rally come under Artillery fire and break! In the back ground the Horse artillery is finally arriving. 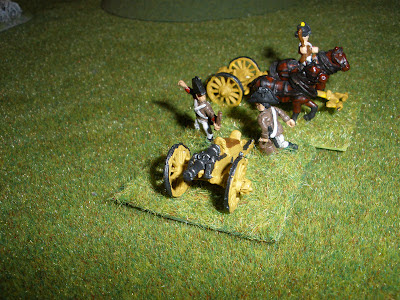 The Horse gun is probably the Austrian only hope of holding this flank and therefore winning the battle. If they can halt the French Cavalry then the larger Austrian infantry battalions have a chance to break through. 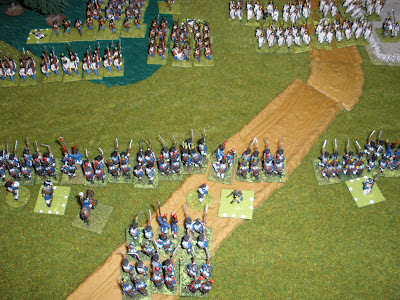 The Austrian pressure is mounting and so are the French casualties. 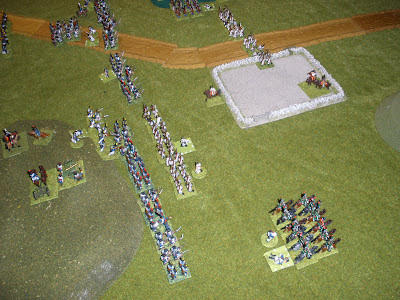 But in one disastrous turn the Austrian Horse Artillery is over run and their centre battalion is shot away by a freakishly effective French Volley. With their left wing now completely open and the push in the centre slowed it is obviously no longer a chance for Austrian success.   This battle was lost in the first 5 mins. First the lazy command to the Cavalry that left them trying extract themselves under canister fire. Then the unfortunate blunder by the Horse Artillery that kept them out of the fight for so long. That said the two Voltigeur units performed a fantastic job holding up the infantry advance.