Kokonut Island is a fictitious Dutch colony off the west coast of Africa.  A former French colony it's exports are hardwood timber and coconut oil. Its white sandy beach's and mild weather also make it a popular tourist attraction.  It is currently being prepared for independence although the date seems to moved further and further back by each new government in Amsterdam.
For some this has become intolerable. One group called The Kokonut Island Liberation Army (KILA) was established by a local charismatic leader called "Grand" Rouge and has begun nuisance raids in protest soon after establishing their base in the mountainous and forested area called Eagles Squat. Dutch army units have began sweeping this area in an attempt to break the group up before they become too established. In the mean time they (KILA) have received both training and equipment from Cuba. And on the May 1 1966 they were ready too begin operations.

The Dutch have left behind a small force guarding a truck full of supplies in the village of Woody Knob. It is rumored to also include a medium mortar.  Grand Rouge wants it and has sent Lt Duex and part of the 1st Platoon behind Dutch lines to capture it.﻿ 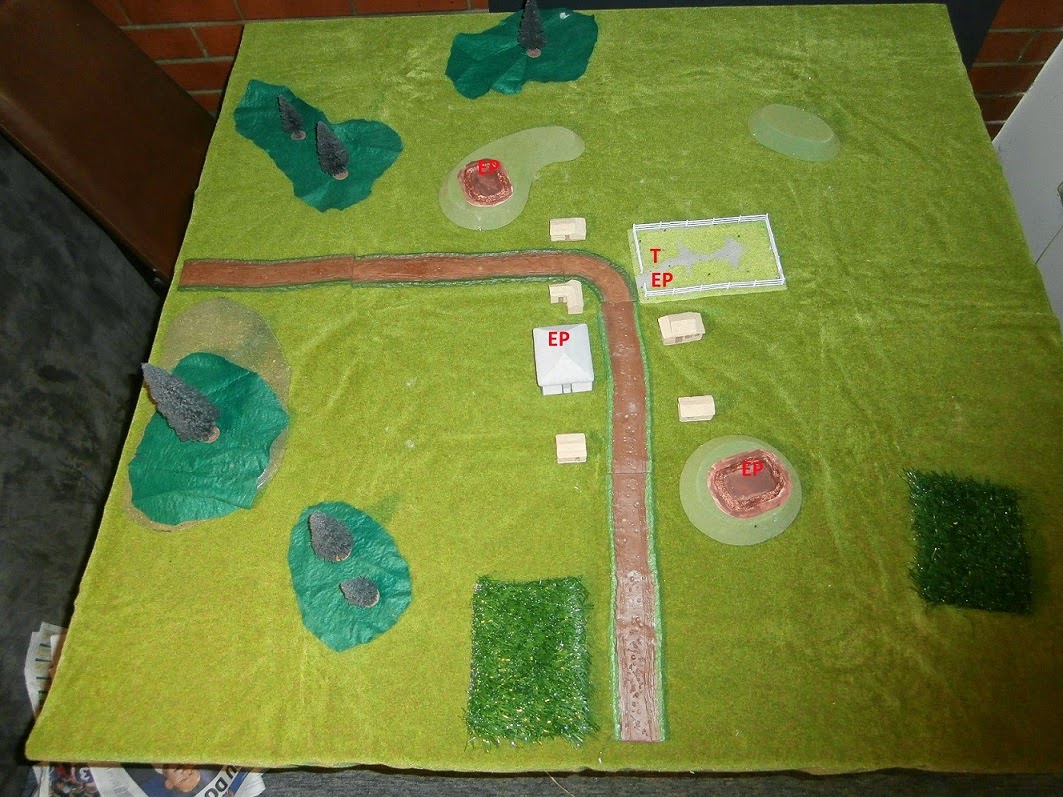 T marks the location of the truck. The 4 EP's shows possible locations of enemy troops including two dug in areas guarding the roads into town,  the government admin office and near the truck itself. The Dutch are conscripts and are rated green.

I will take the side of KILA because they have the initiative at this point of the campaign. They have two squads rated as green and with touchy moral. I'm going to attempt a night time operation and hopefully reduce the amount of fire they take. Also because of their inexperience I am going to keep them close together and try to systematically reduce the enemy positions. 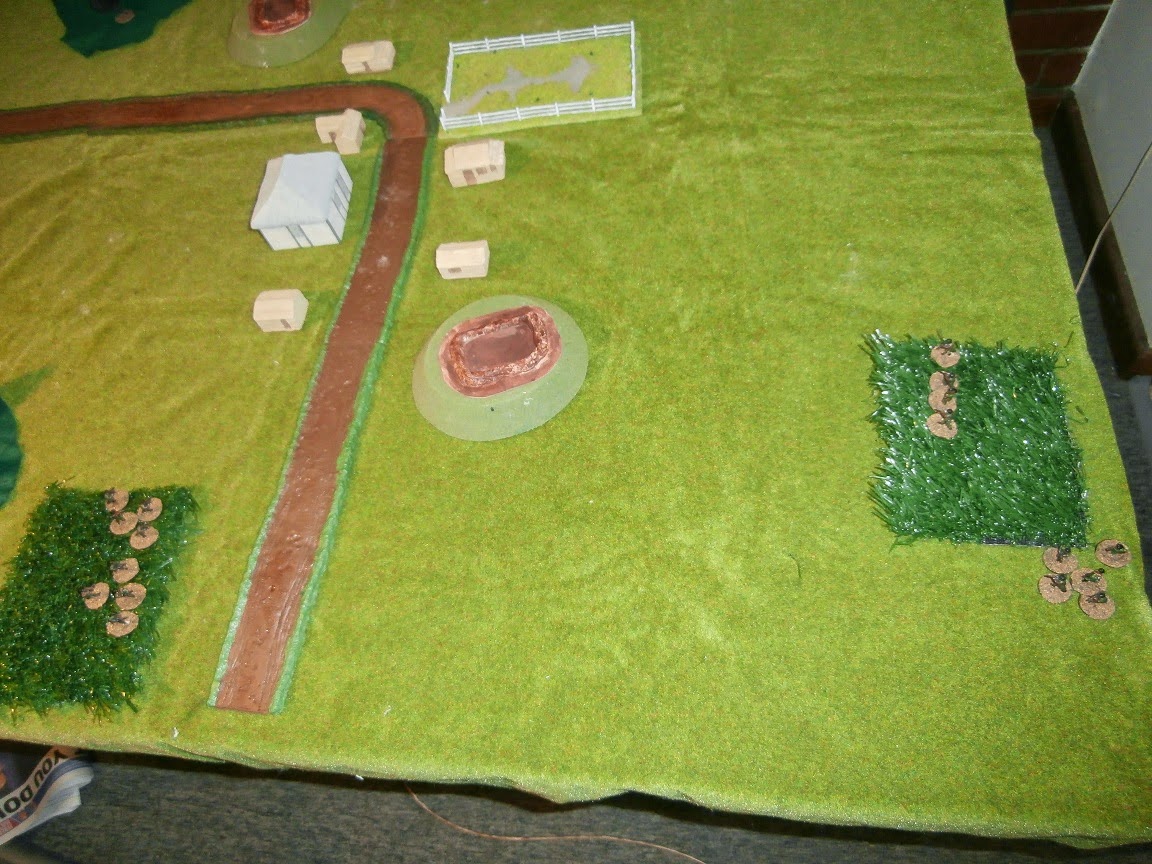 2nd squad will enter from the south and provide covering fire and 1st squad will attack from the SE.
Turn one. no enemy spotted 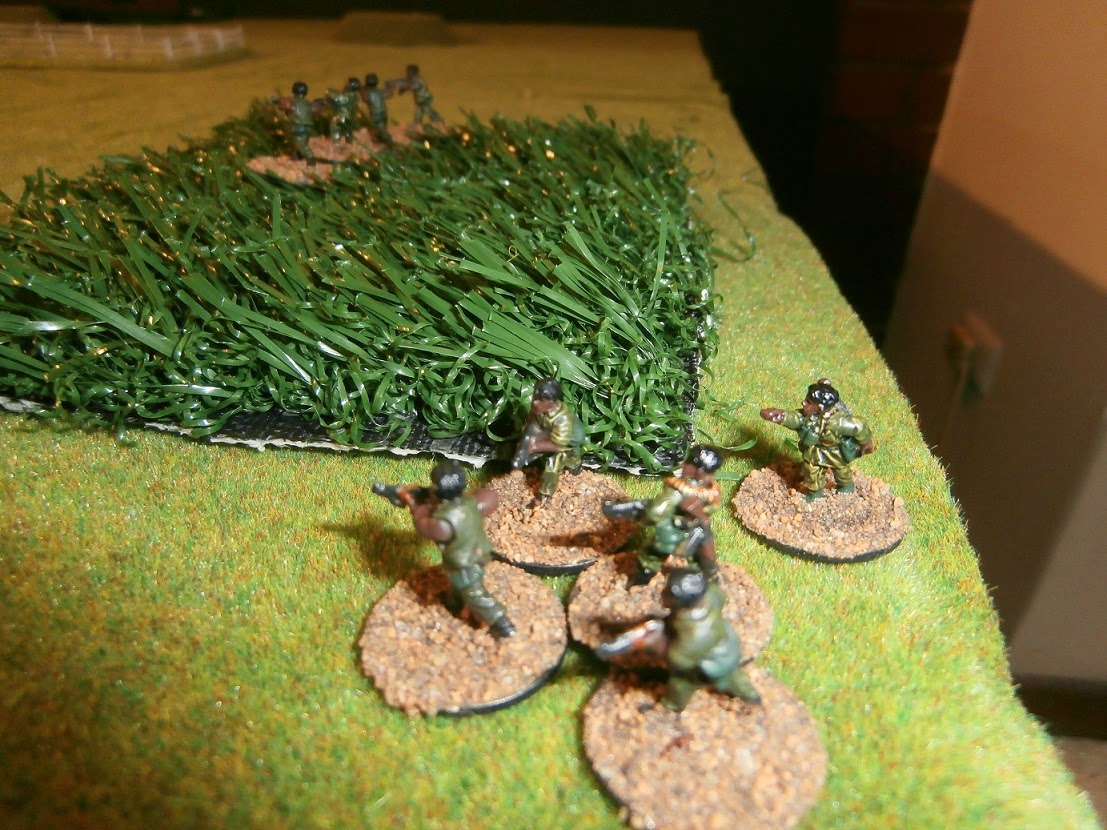 Lt Duex with his new binoculars accompanying 1st Squad.
One fire team of which has taken up an over watch  position in the elephant grass. 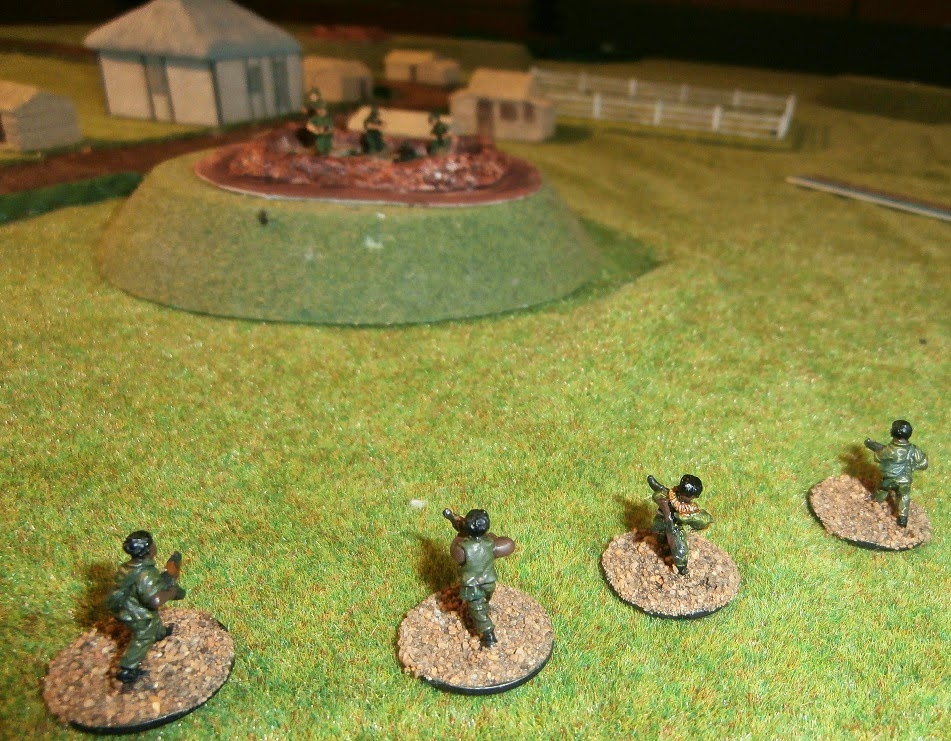 Eventually 1st squad have spotted some enemy troops located in the field works. 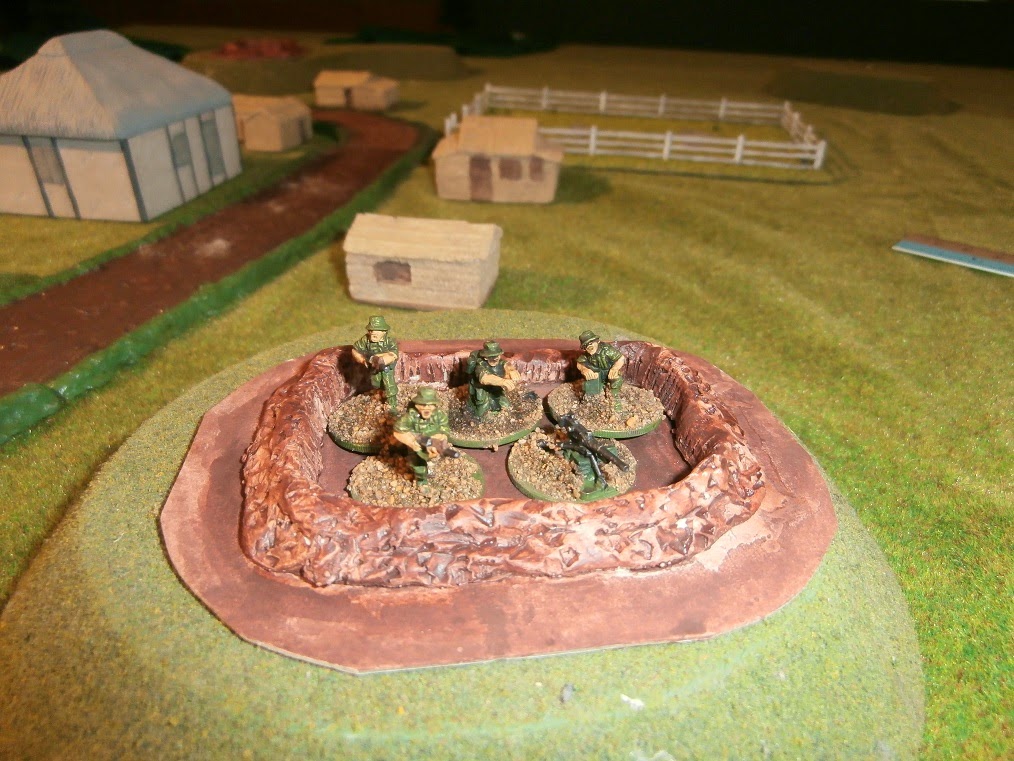 And with a tremendously bad start to the mission and the campaign  for KILA
the first enemy encounted is a dug in HMG! 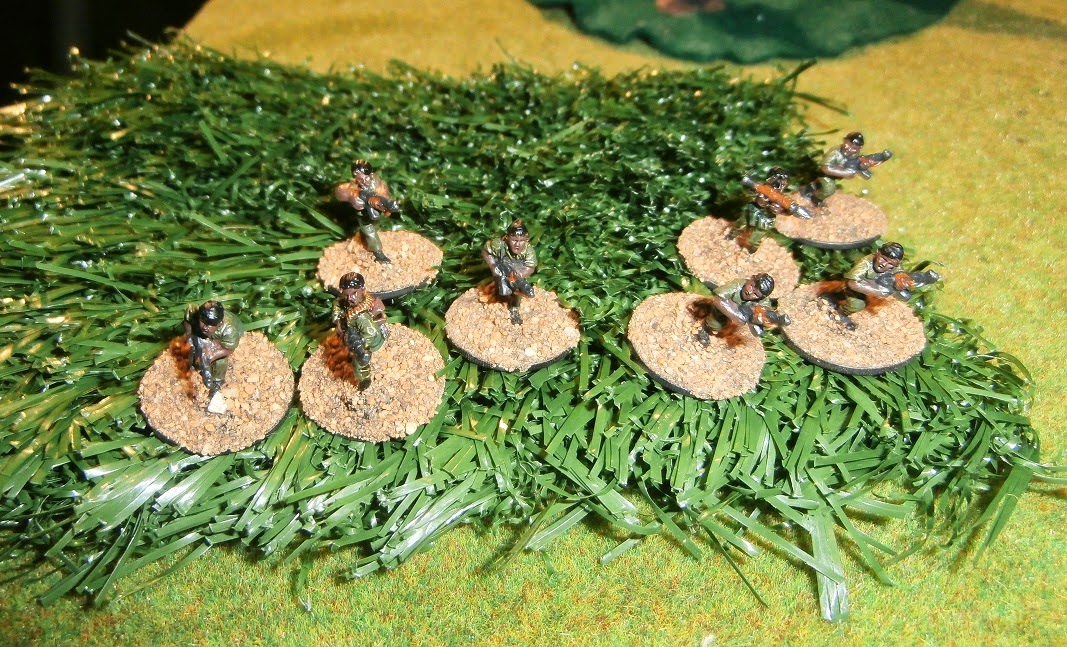 The 2nd squad manages to open fire on the HMG before its ready. 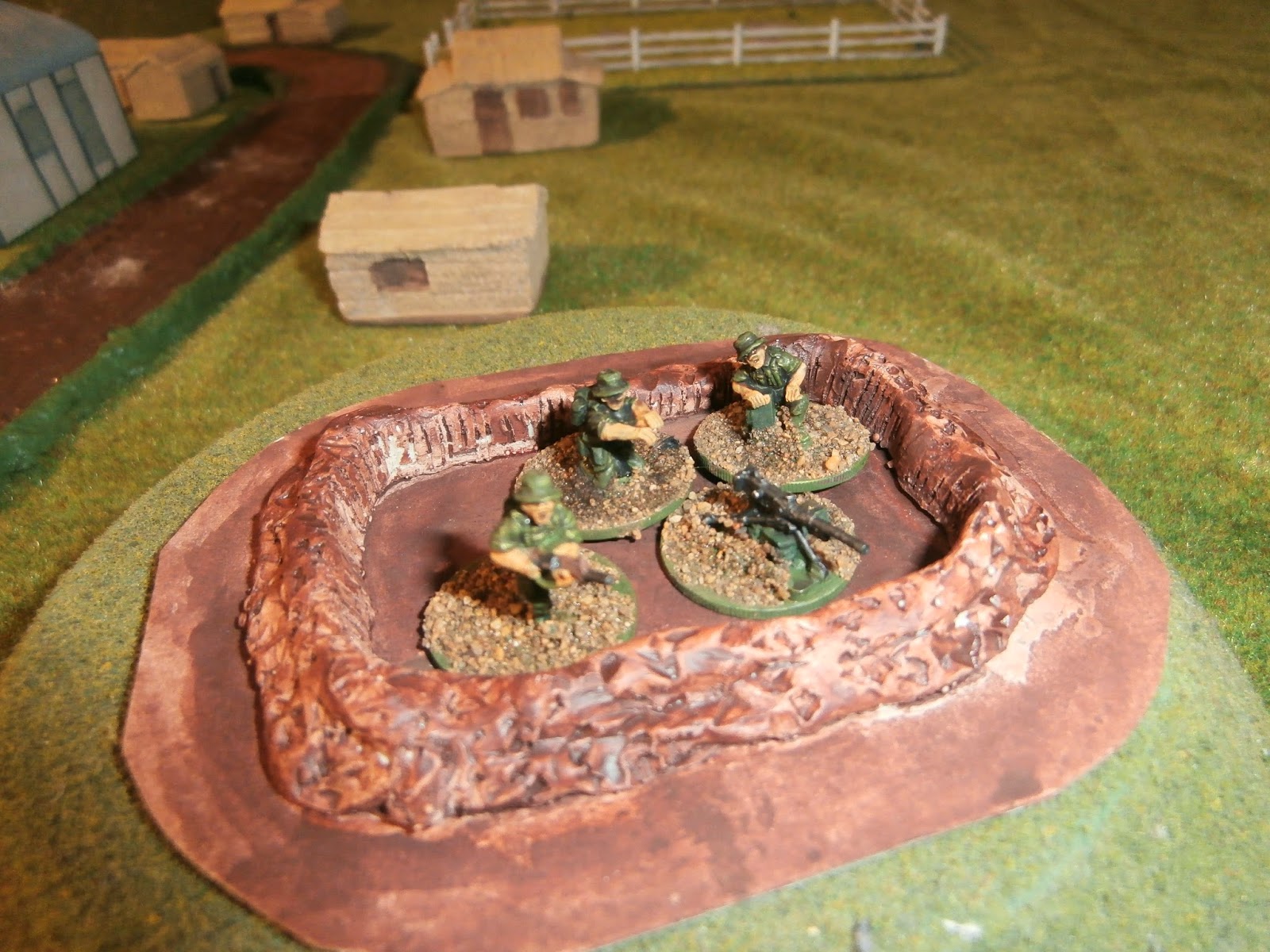 Their fire causes a casualty and pins the Machine gun group. 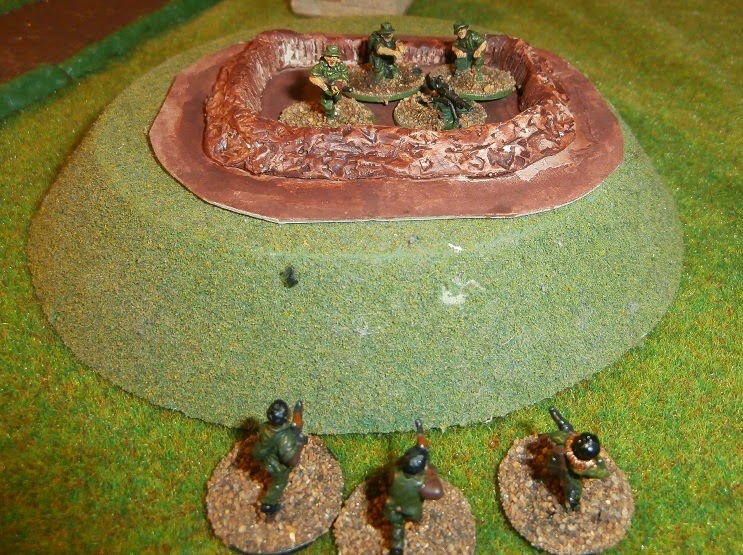 Seeing them pinned part of the 1st Squad moves forward to assault.
Loosing one of their fire team members. 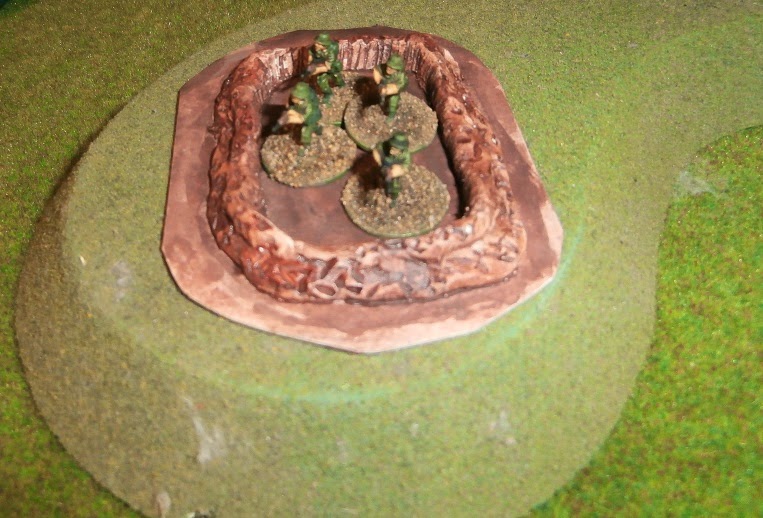 All the shooting from second squad has brought them to the attention
of the enemy troops dug in to the north. 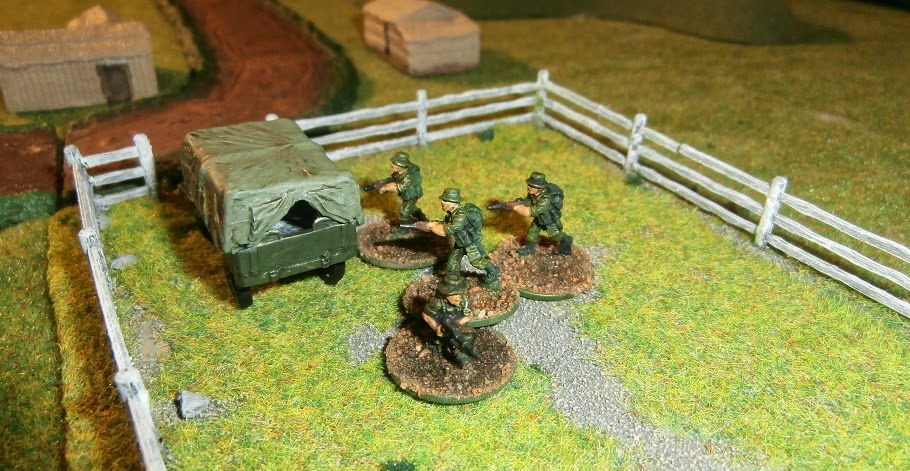 The trucks guard detail has spotted fire coming from of 1st Squad. 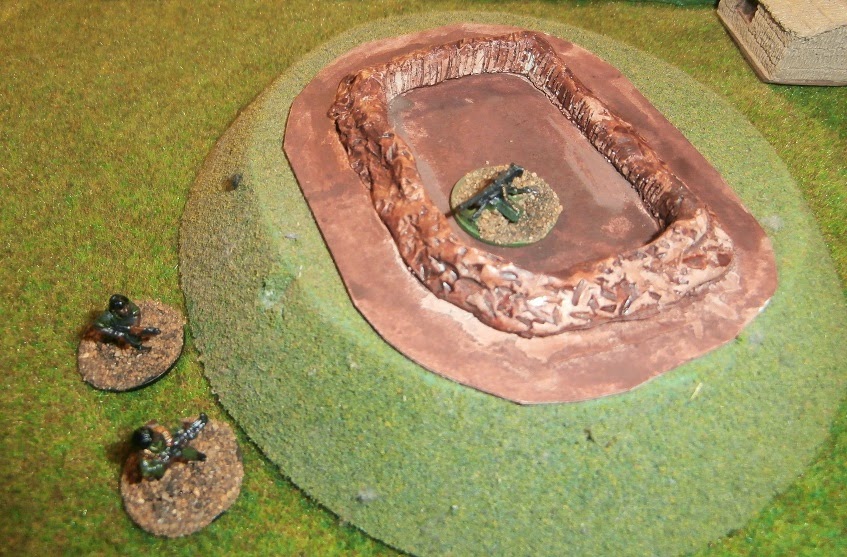 The concentrated fire has managed to reduce the HMG group and the last survivor flees.
Though one fire team of 1st Squad is pretty shaken with two casualties. 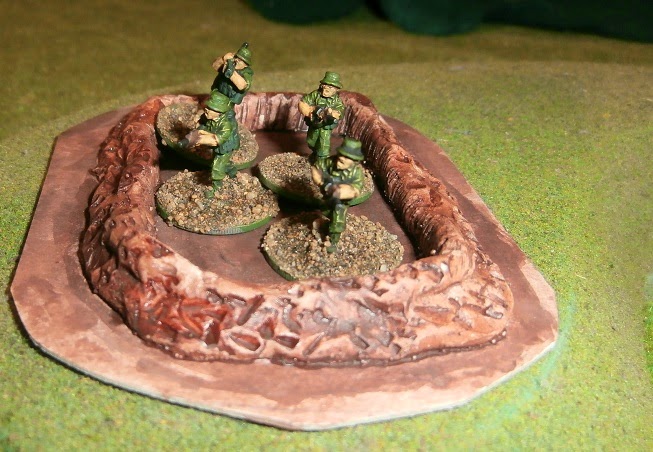 The northern sentry group continues to pin down parts of 2nd Squad. 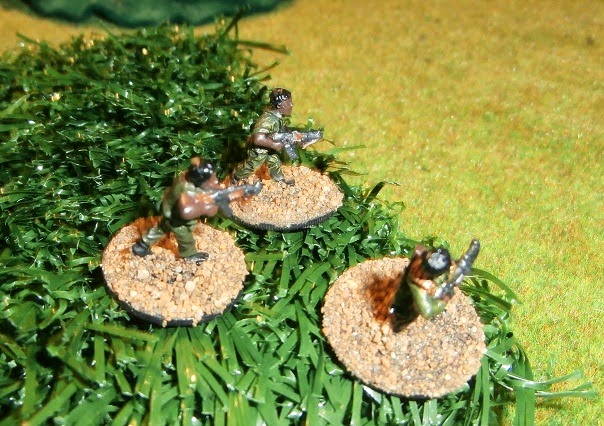 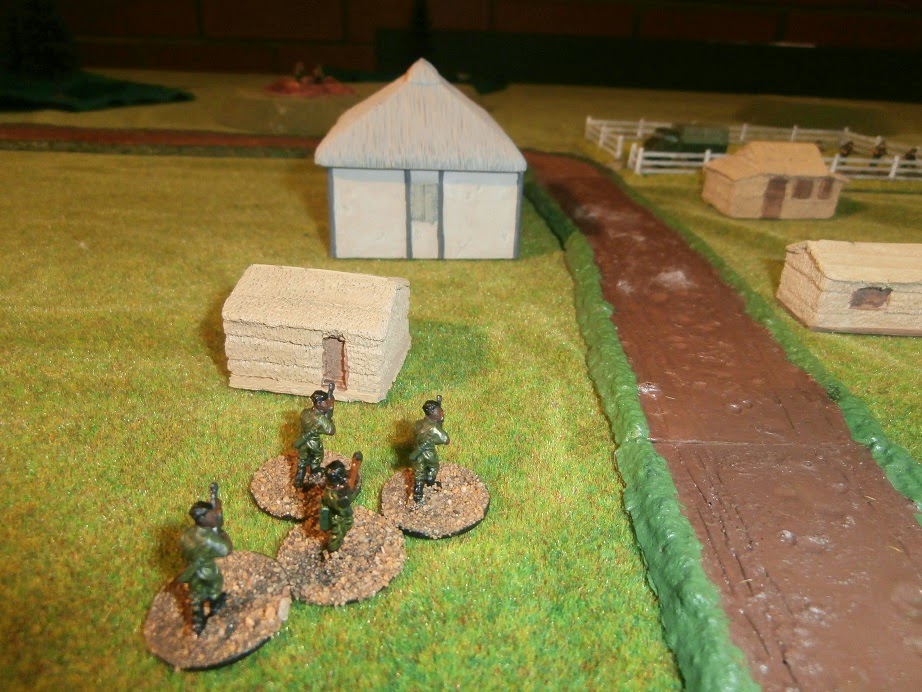 While the other half of 2nd Squad moves through the village towards the admin building. 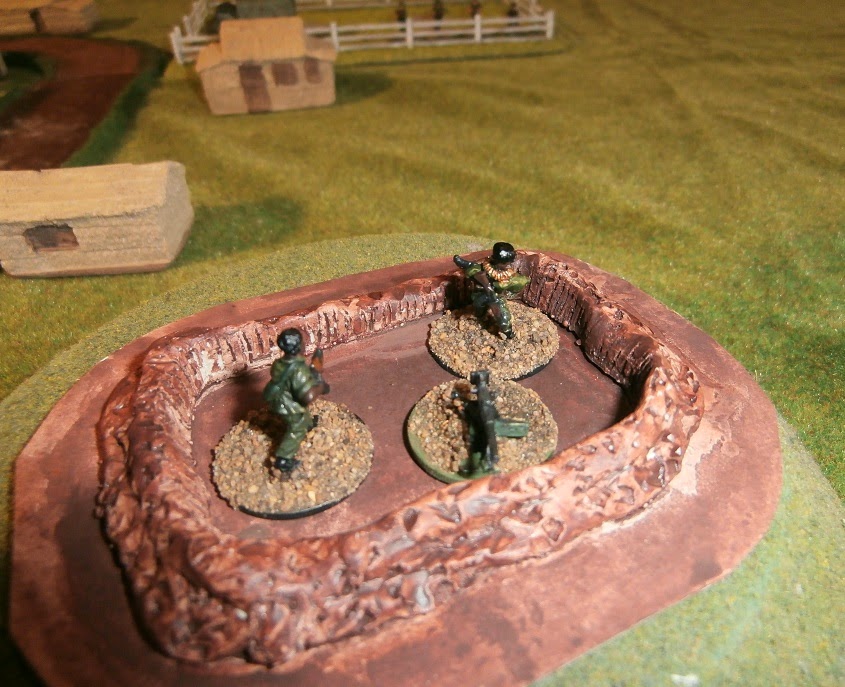 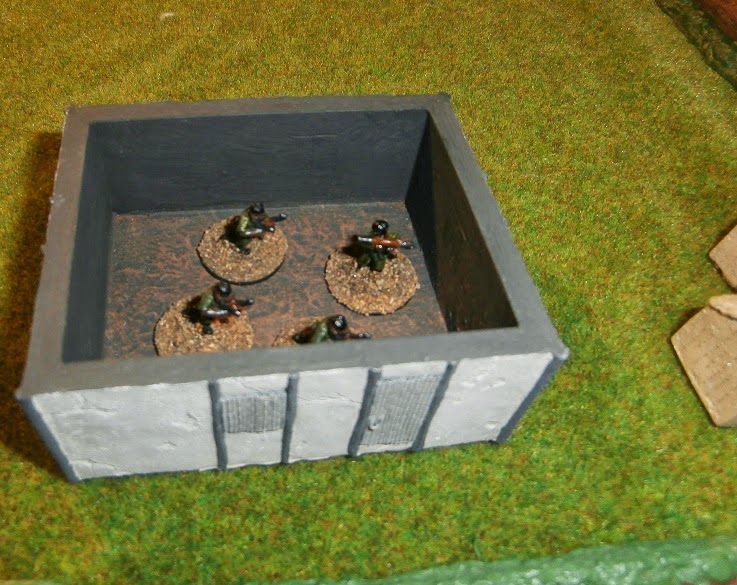 The admin building turns out to be empty and 2nd squad occupies it.
They then start firing at the troops dug in to the north. \
The rest of 2nd Squad moves into a house and adds its fire against the troops guarding the truck. 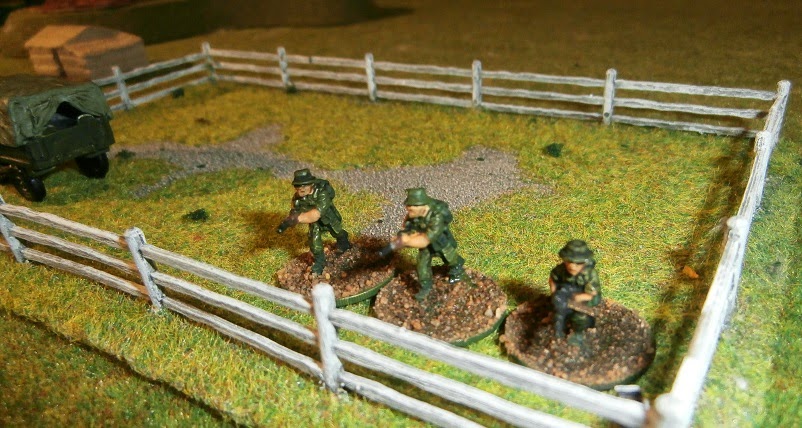 The guard  have taken a casualty and am now caught in a cross fire.

Eventualy their moral fails and they retreat. 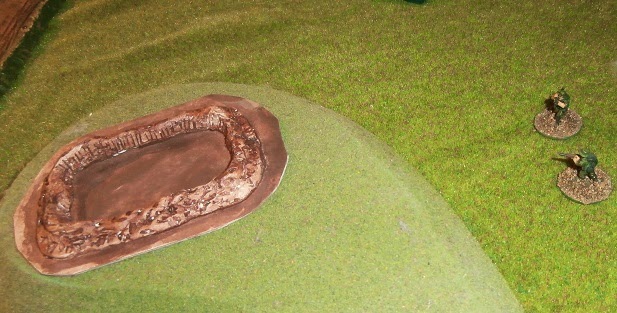 The same with their comrades to the north. 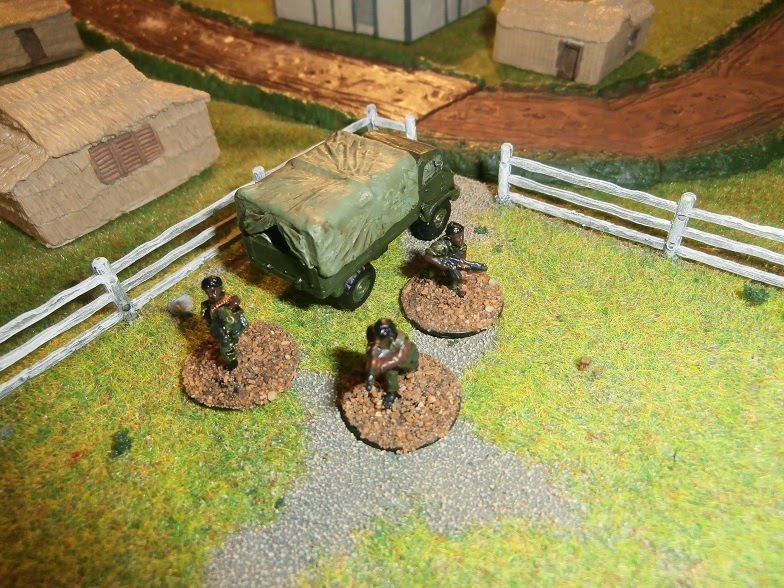 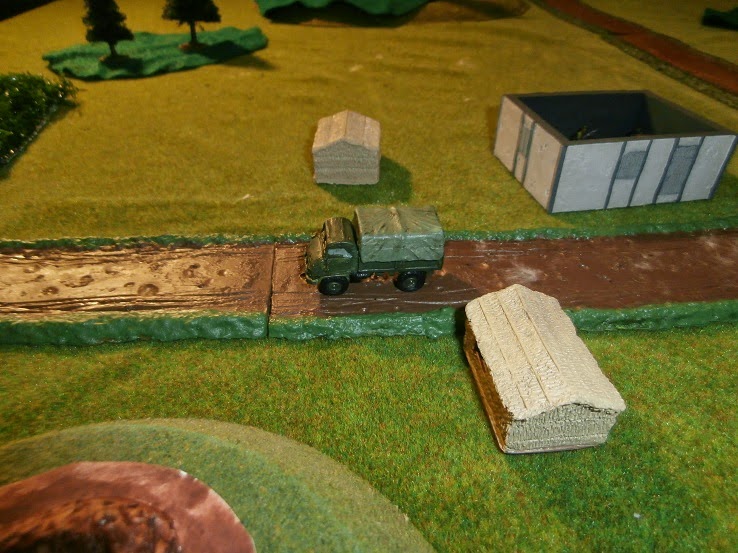 And manage a clean get away!

I used the Force on Force rules for the first time and I really enjoyed them. My solo rules did a good job of providing the suspense of not knowing what I was facing just its general location.
As for the campaign. Well KILA wins and so keeps the initiative
and Lt Deux receives a promotion to 1st Lieutenant.
Next scenario is a full scale attack on Woody Knob.