I've been wanting to have a of game Hail Caesar rules for a long time. So I dug out my very first army. Early Imperial Romans, 1970s Minifigs. And my Ancient Britons, 1990's Essex. The game was a no nonsense three generals and 300pts and a side engagement with minimal terrain of two woods and a hill. Keeping it simple, I hoped.

The Britons right wing. Skirmishing light cavalry and Javelinmen backed by
some serious looking gents in Chariots.  The Javelinmen were to hide in the safety of the woods and harass who ever came close enough.

The Briton left wing. Just a some chariots and Light cavalry. Their job was to reach the hill first
and occupy the Roman right with skirmishing. 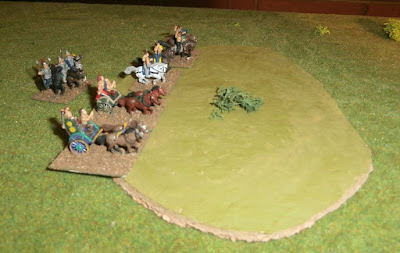 First turn. Mission accomplished for the Left wing as they reach the hill with a triple move. 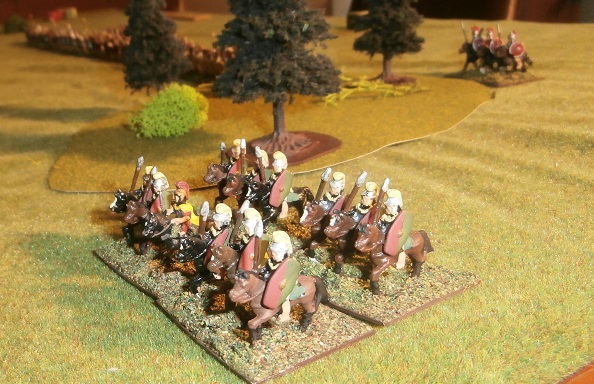 The Roman II Cavalry Ala on the left advance quickly around the woods
in an attempt to meet up with the II Auxiliary Cohort.
These two units make up the Roman left command. 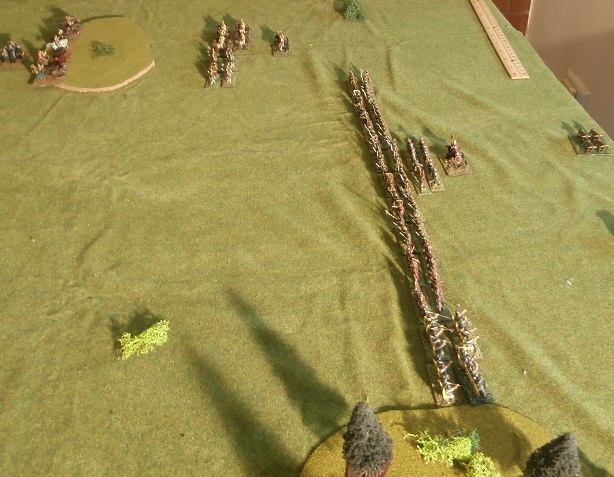 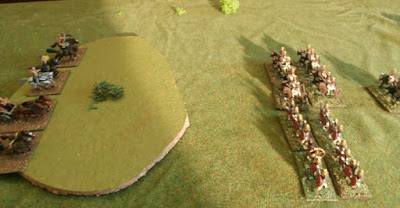 The Roman right wing consisting of the I Cavalry Ala and the I Auxiliary Cohort. 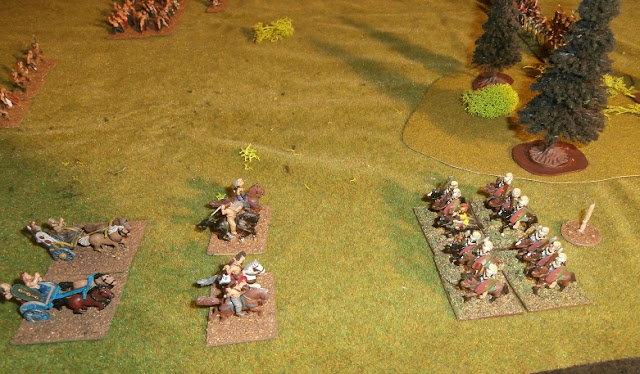 Turn two on the right and the Britons light horse start skirmishing
with the Auxiliary Cavalry. First blood to the Brits. 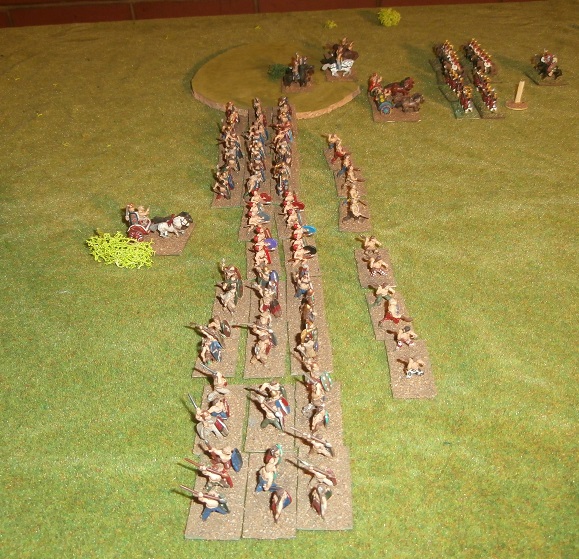 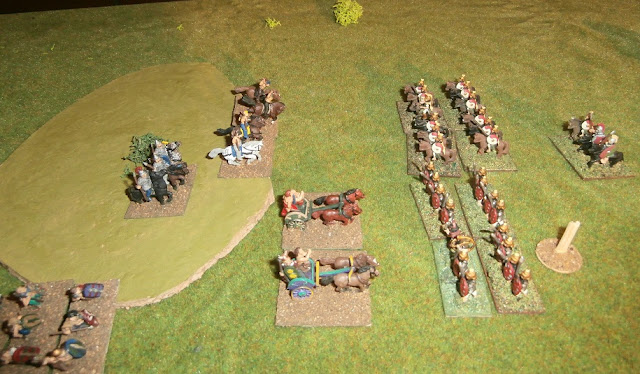 The Britons on the left also close to javelin range inflicting casualties on the I Auxiliary Cohort. 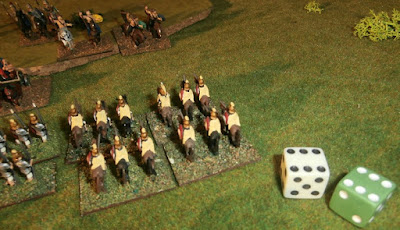 The I Ala are trying to charge the skirmishing light Briton Cavalry.
But instead throw a Blunder! I was hoping to get one of these! 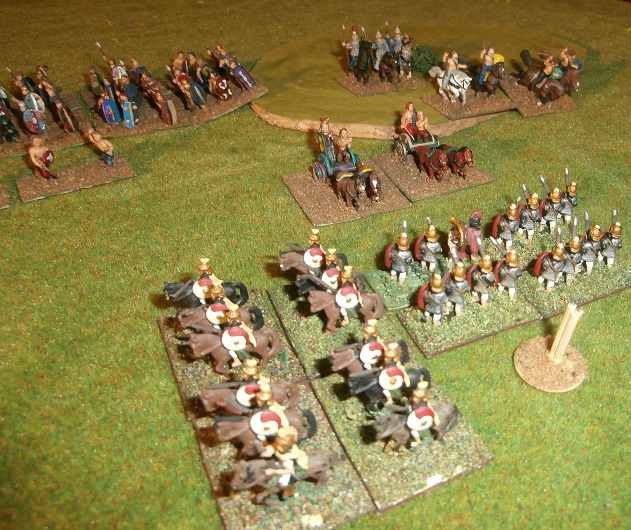 This forces the Roman cavalry to make an involuntary left turn and move!
This now leaves A) the Roman wing open and
B) forces them to present their flank to the massed Briton centre. 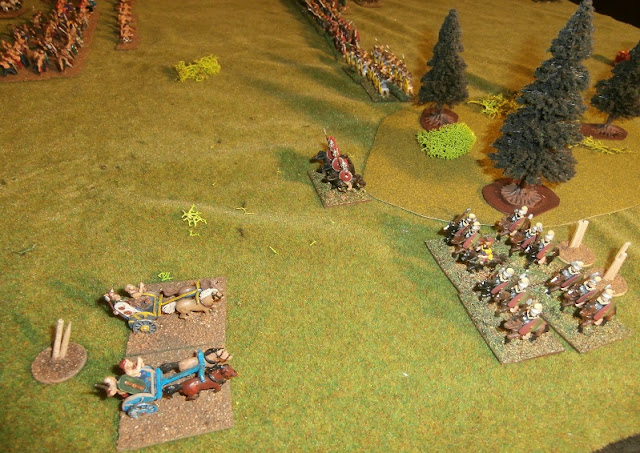 Meanwhile on the Roman Left.
The II Ala have charged the Brit Light Cavalry which Evaded.
They then continued on towards the Chariots who counter charged.
The Chariots won and the cavalry withdrew back with 5 casualties.
One short of becoming Shaken. 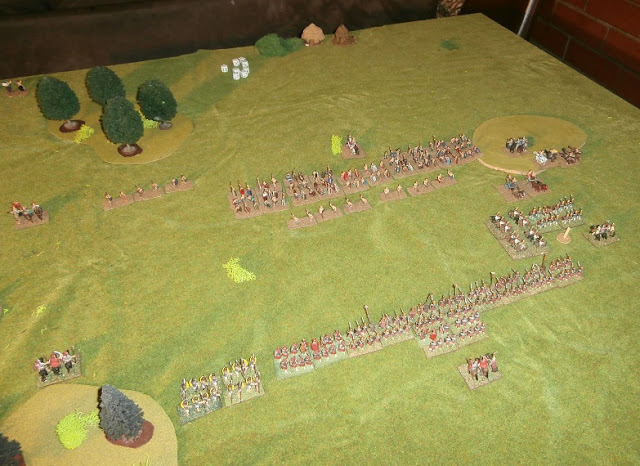 The situation at the end on turn two. 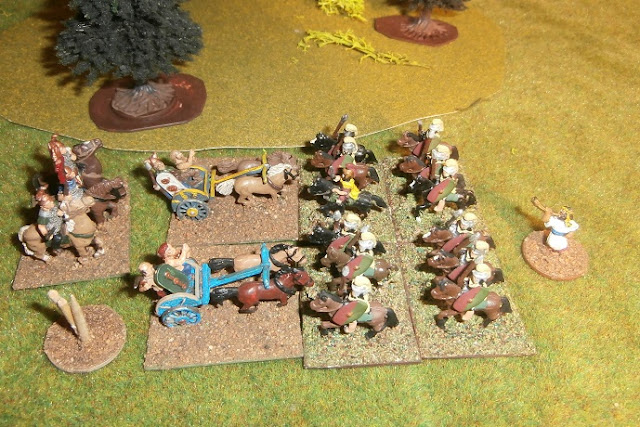 The Briton right wing Charioteers, with some help from their Chieftain,
follow up and push back the Roman II Ala again. The Ala have become shaken.
(See Hittite horn blower behind the unit. Never a good sign.)
The Ala keep loosing but refuse to quit the field. 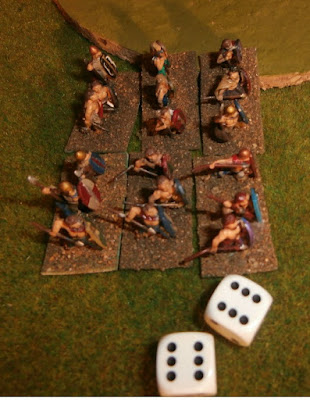 Meanwhile on the Britons left.
The Atrebates warband is now presented with the flank of the
I Ala, who had Blundered across in front of them. They attempt to charge and
Blunder themselves! (The odds must be about 1,200 to 1)

The Blunder forces them into an unscheduled move to their right.
A doubly unlucky incident. 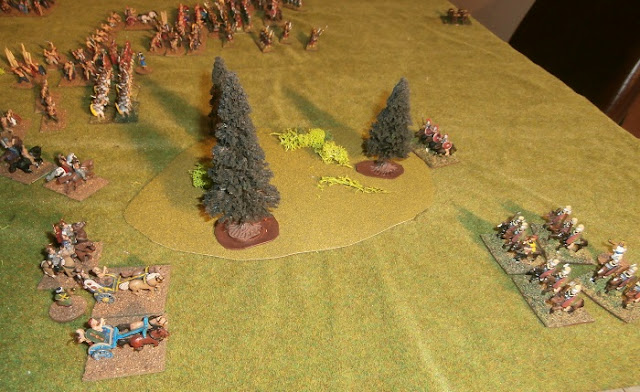 A drawn Melee results in both sides withdrawing for a breather.
(The Chariots are now also Shaken and have their own horn blower.)
The II Ala has now become disordered as well. 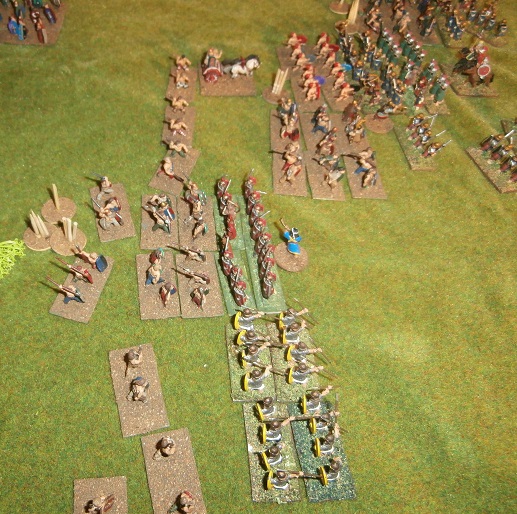 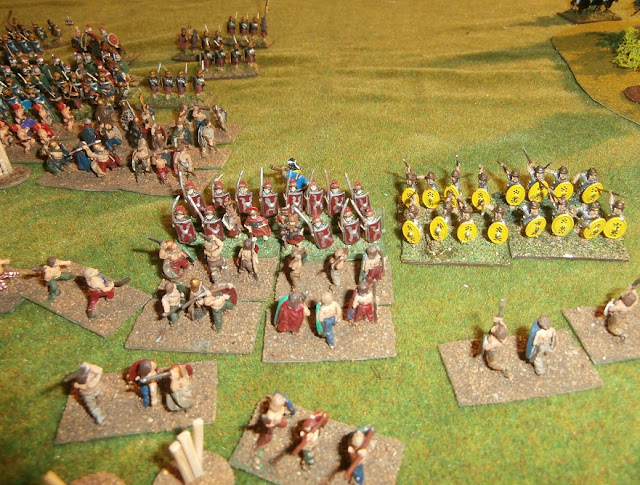 The V Cohort has become Shaken though has managed to disorder the Dumnonii Warband
with support from the II Auxiliary! 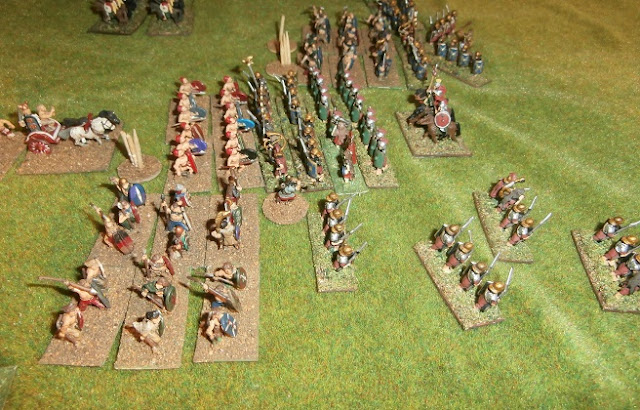 The III Cohort has been routed by the Cantiaci!
The Fanatics have Shaken the Ist Cohort but not broken them.
Support from the Praetorian Cohort important in their survival. 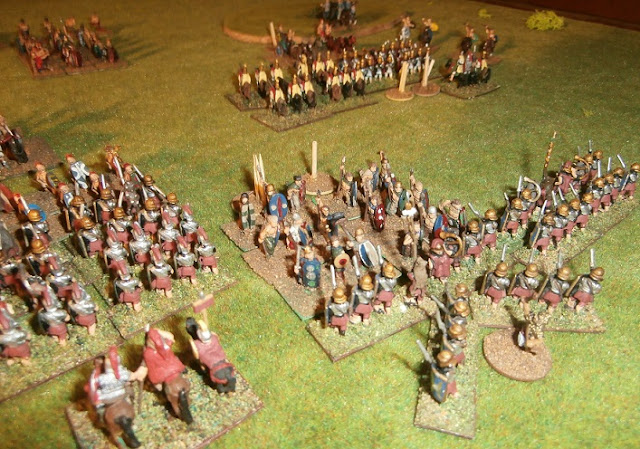 The II Cohort is just holding on from the Belgae Warband
with support from the IV Cohort on their right. 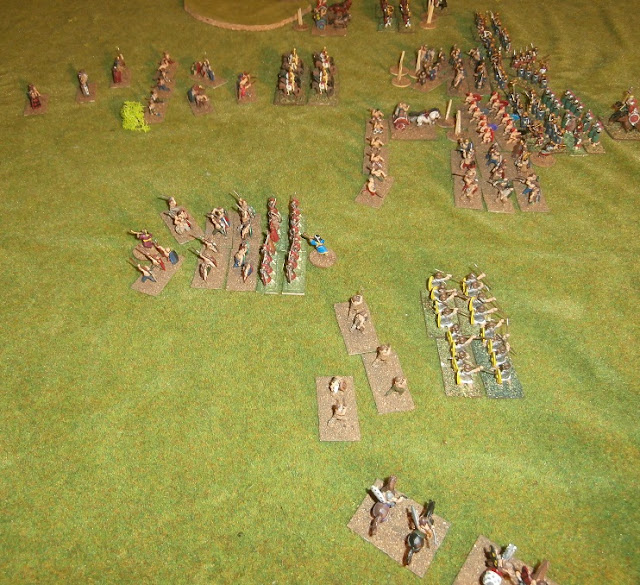 The V Cohort continues to push the Dumnonii back 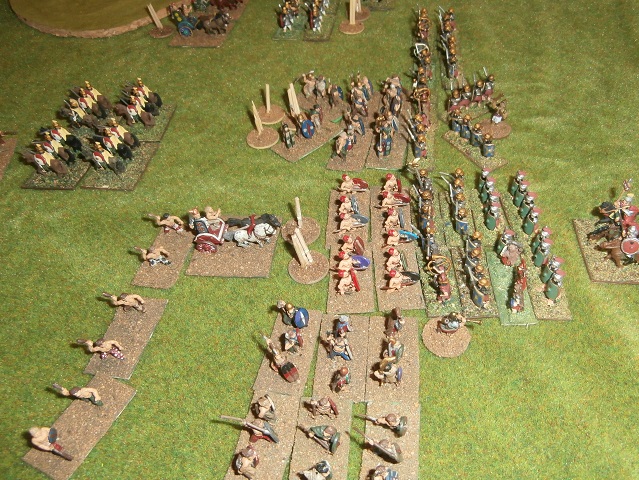 While the centre develops into a bloody Melee! 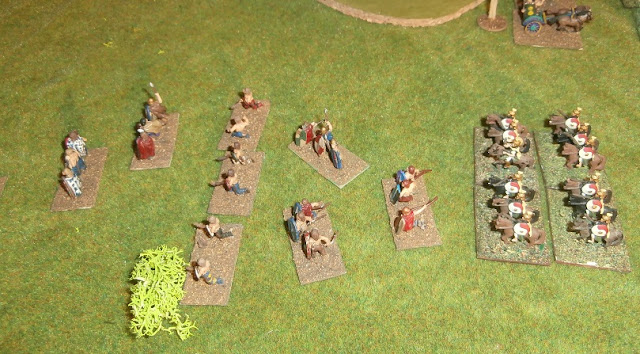 Things were looking good for the British when the I Ala turned
and Charged the Atrebates in the flank, routing them!
This seemed to trigger a change of fortunes. 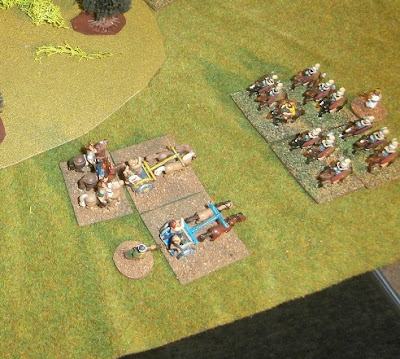 Turn 4 and the Chariots have finally pushed the II Ala all the way back to their starting position. But then V Cohort routs the Dumnonii Warriors. 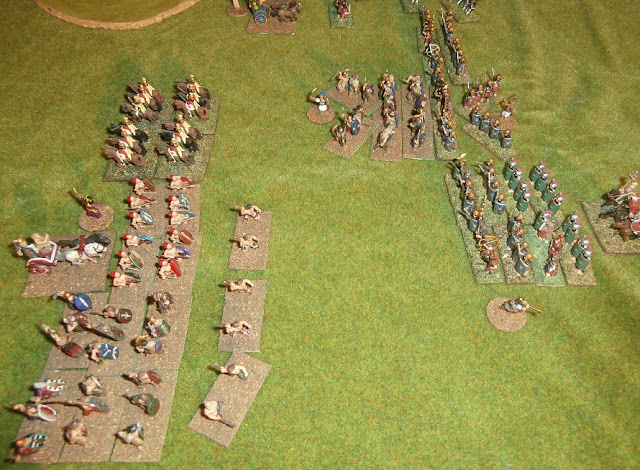 The I Cohort, with their Praetorian pals, has recoiled the Fanatics.
The Fanatics are now Shaken and so lose their +1 moral save they get for being, well, fanatics! 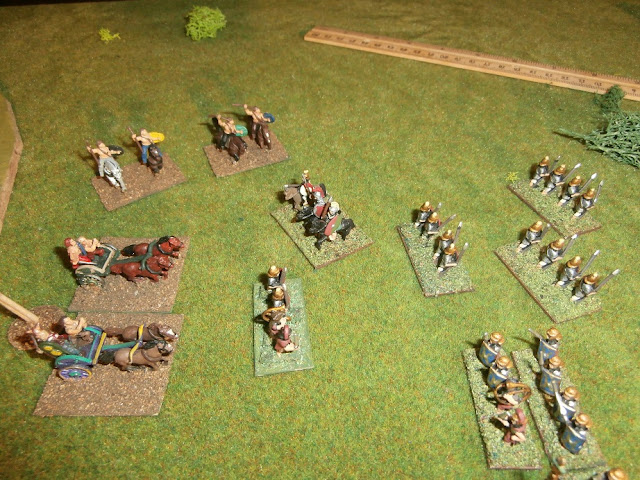 Britons left hand Chariots. Frustrated with continually missing the I Auxiliary with their javelins charge and break the Auxiliary instead! 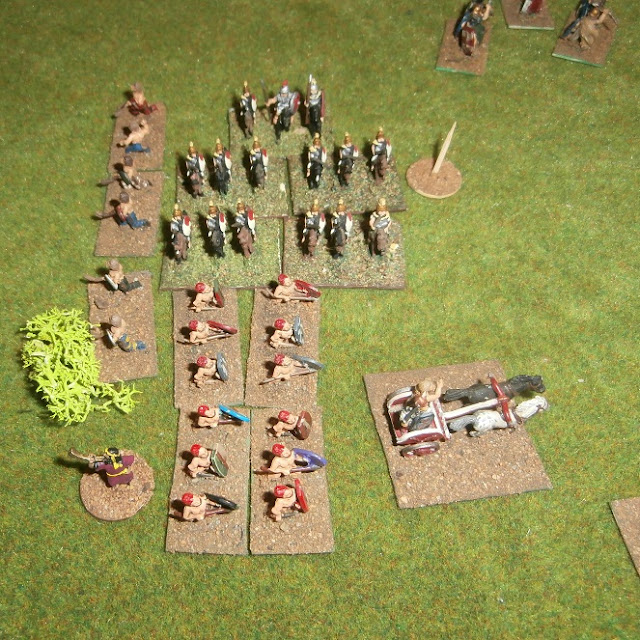 The I Ala find another flank to charge. The Shaken Fanatics! 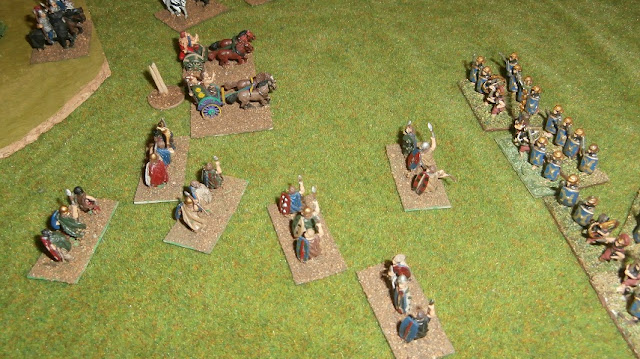 The II and IV Cohorts break the Belgae Warriors! 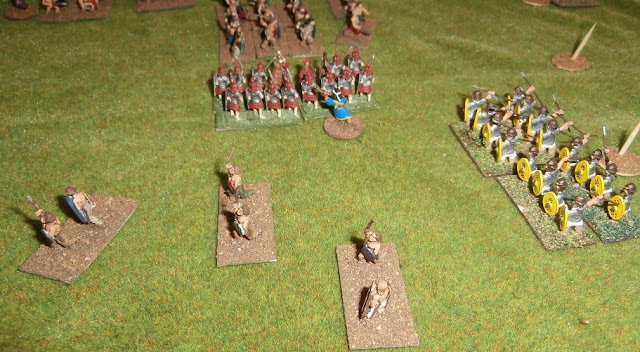 The II Auxiliary outshoot the Briton Javelinmen who run away.

The II Ala finally win a round of melee over the Chariots who are disordered by the shock!

The Briton Main line breaks! This leaves 4 units facing 8 and so I call it a Roman win.
But a close one! 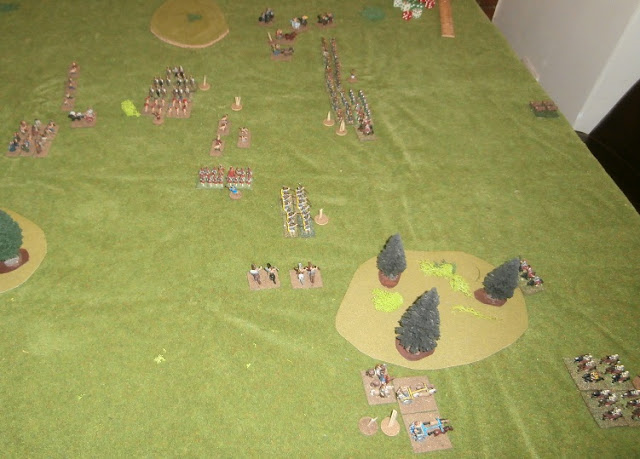 Table at the end.

I thoroughly enjoyed this game. There were big swings of fortune but nothing out of the wargame ordinary and I felt that either side would win at different times. The three Briton foot skirmishers definitely under performed! I don't think they produced one casualty amongst them. One evaded and never managed to obey another order until its division broke. Another got shot a couple of times and routed. The large warbands are real killers. The Romans survived only by very good moral checks.
Man of the match has to go to the I Ala for its successful charge on the Atrebates Warband.
I must have made rules errors but attempted to play the rules as written.

Hail Caesar manages to tick a lot of boxes. Some, I think, uniquely.
Firstly and importantly to me Skirmishers get to skirmish and javelin men are
different to Slingers and Bowmen are different to the other.
Secondly a bonus point. Peltasts actually get to change into  skirmish formation, if they want. You always read about that making them unique and yet no rules I've used before have allowed it.
Fourthly. The game seems balanced even though the units were all very different statistically.
Fifthly Hail Caesar strikes me as a flexible set of rules. That could be used for "The wagon Train" scenario as well as a major battle and, I'm guessing, a siege.
Sixth. I like the way range combat is treated. It might not wipe the enemy out with shooting but has the potential to be very disruptive.
Seventh. Seems very adaptable to solo with the random activations and blunders.
Eighth. It really does reward having a reserve.
was very enjoyable to once again have units recoiling and some routing at first contact while others lost, lost then came back again. It reminded me of WRG 6th but with out the long moral checks and casualty math. I will give them another try.
Negative points.
Trying to find rules in the book that you know you've read but can't remember exactly.
Moving and fighting in woods. Skirmish formations are at no advantage to close formation foot or cavalry. Might fiddle with this just because.
The Moral saves. They seem to follow the amount of protection, then they seem to not. Its the other part of the rules I might fiddle with if I take them up.
﻿
Posted by David Cooke at 01:07