The Egyptians and Canaanites have at it!

Had the chance give my new Egyptian and Canaanite armies their first run. Also a good time to try Neil Thomas' "Ancient and Medieval Wargames rules" for the first time as well. Instead of a "straight set to" I decided to dice for one of the scenarios in his "One Hour Wargames" book.
The dice chose number 5: Bridgehead.  I diced for extra terrain and threw 3 6s in a row! The extra 2 hills and a impassable sand dune didn't affect the game at all. 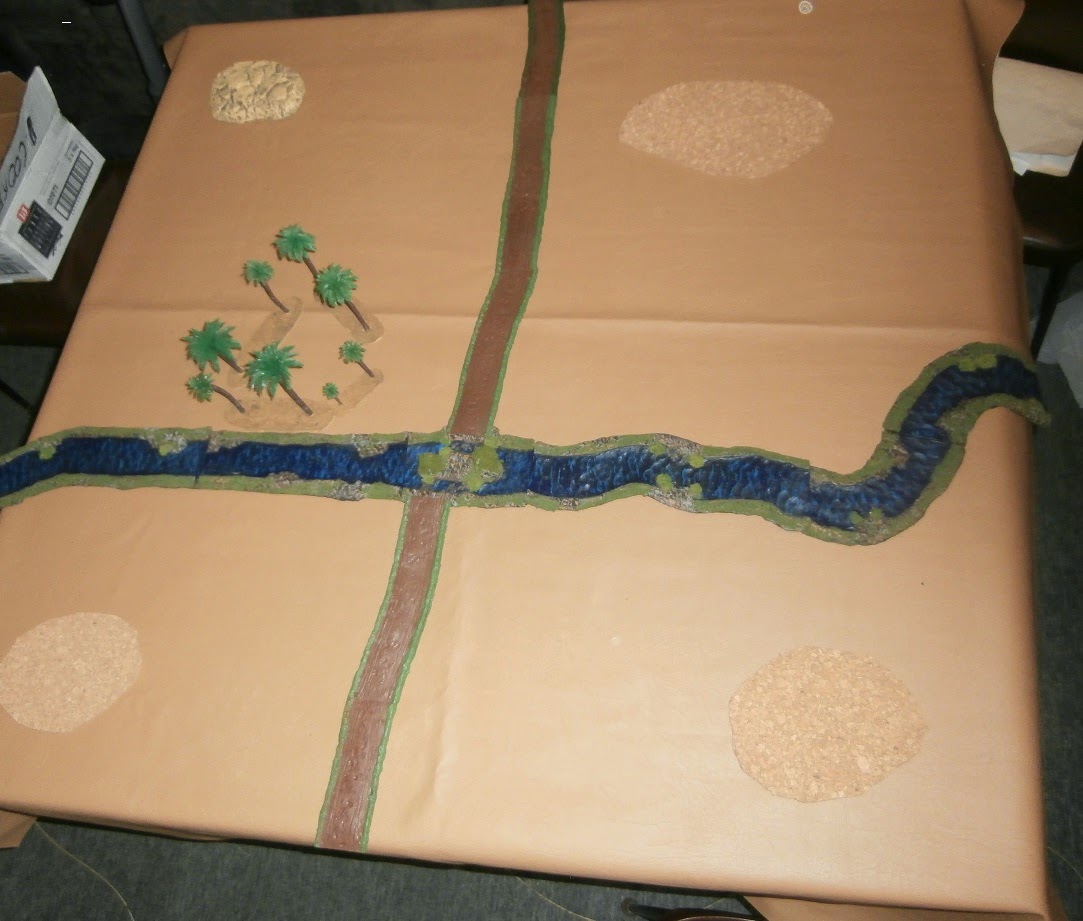 The Canaanites have discover a river crossing in Egyptian territory and wish to secure it. The Egyptians are bringing in troops from surrounding garrisons to stop them. Both have the same mission. No enemy within 12inches of ford after 20 turns. 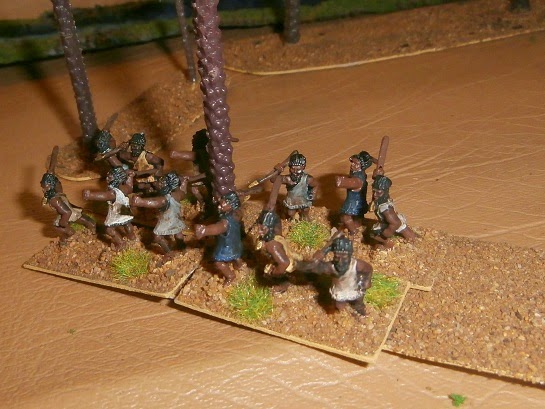 With only one unit allowed on the table to begin with the Canaanites
place the Black Spear in the stand of date palms for protection.
Some reason this is a favourite unit. 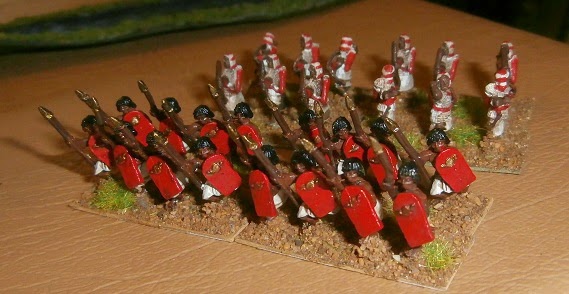 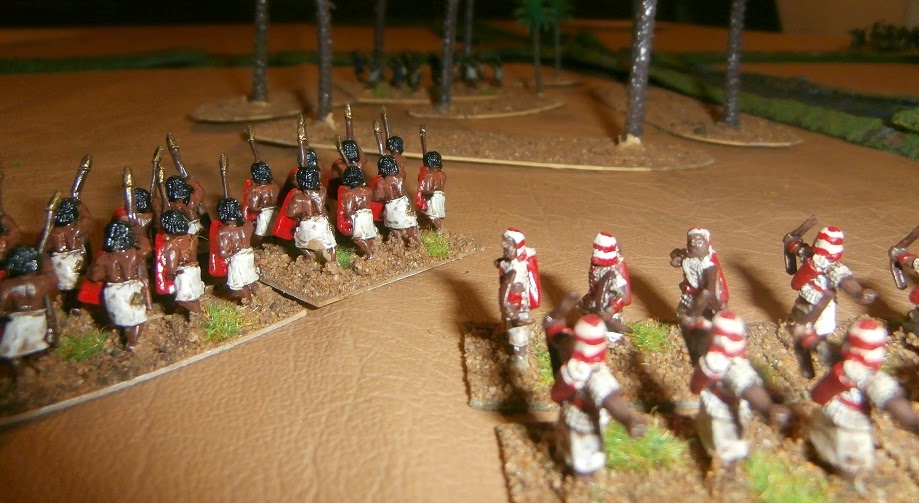 Troops from the Egyptian Re Division arrive in the west unexpectedly!
(I hadn't read the reinforcement section of the scenario until after set up.
Which was better because it added some extra fog of war.) 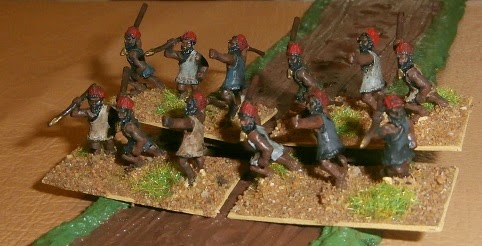 Turn two and the Canaanite Red Spear rush up the road to rescue their comrades! 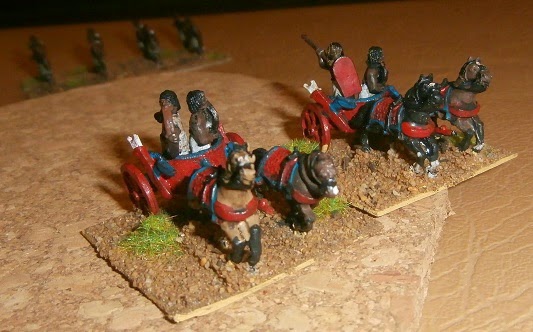 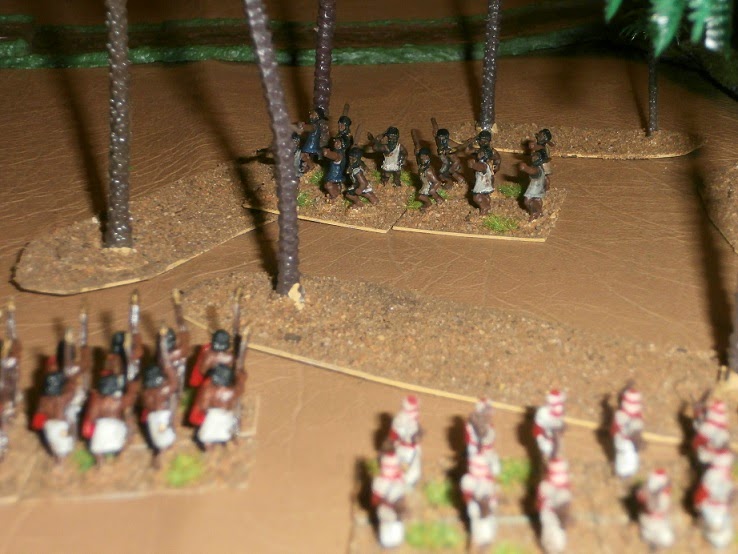 Meanwhile the Black Spear ties down two units by occupying the date palms. 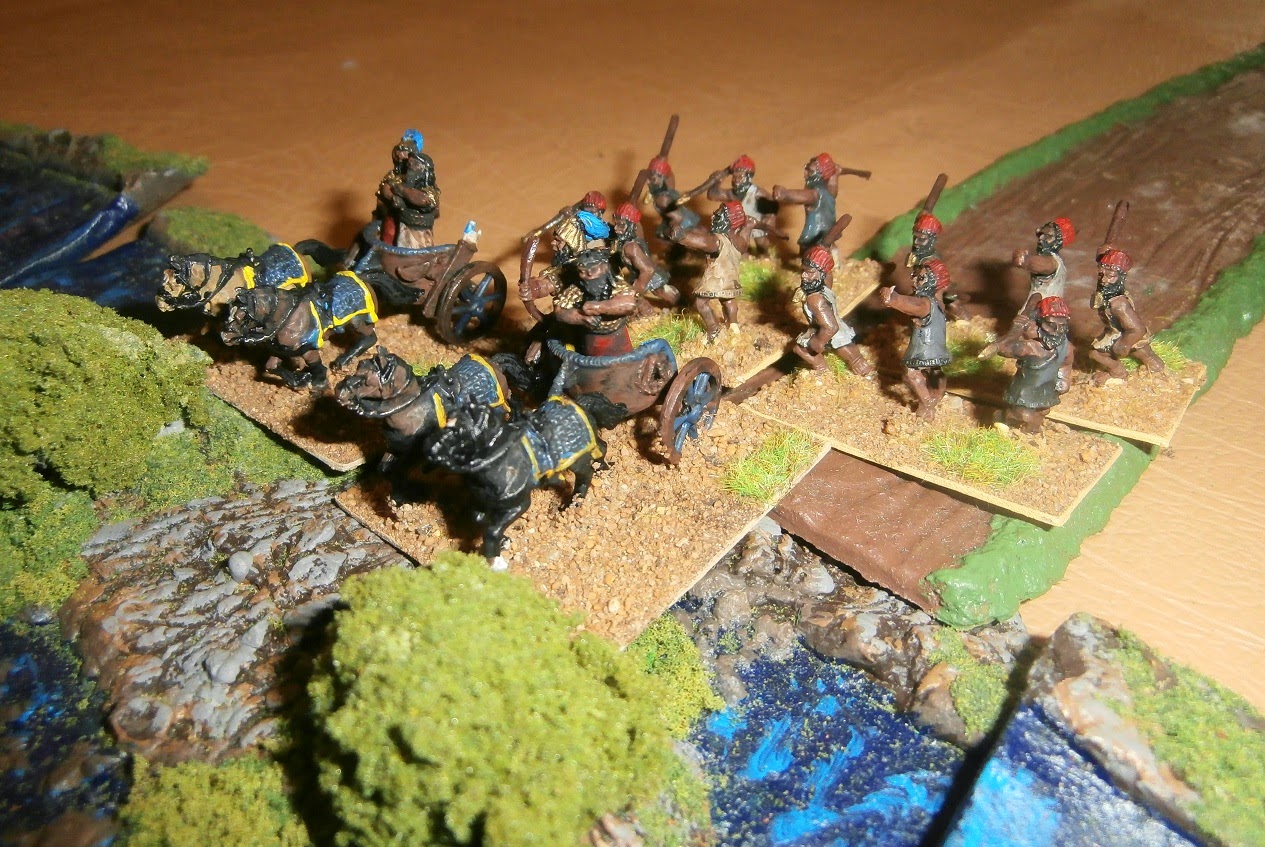 The Canaan Blue chariots manage to over take the Red Spear at the Ford.
Light Chariots really motor in these rules!

Turn5 The Amun Spear and Archers arrive for Egypt. 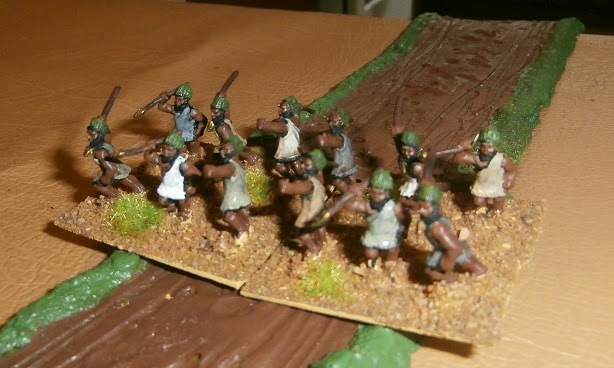 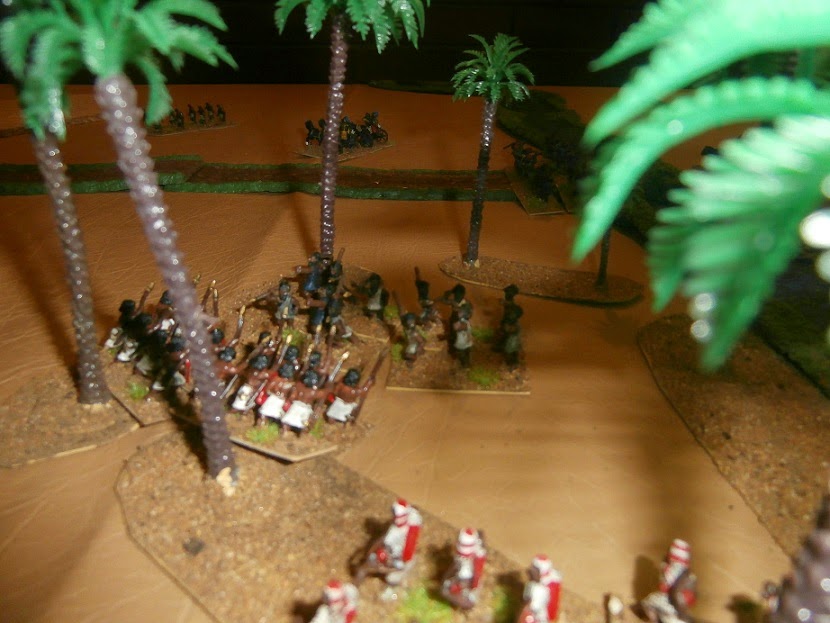 Meanwhile with the steady build up of Canaan forces the Re Archers turn around
and slowly make their way out of the Date plantation. 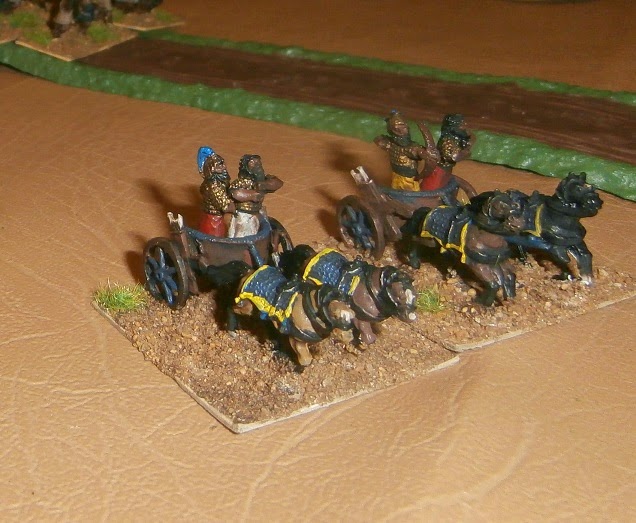 The Blue Chariots chase the Re Chariots which retreated to the hill. 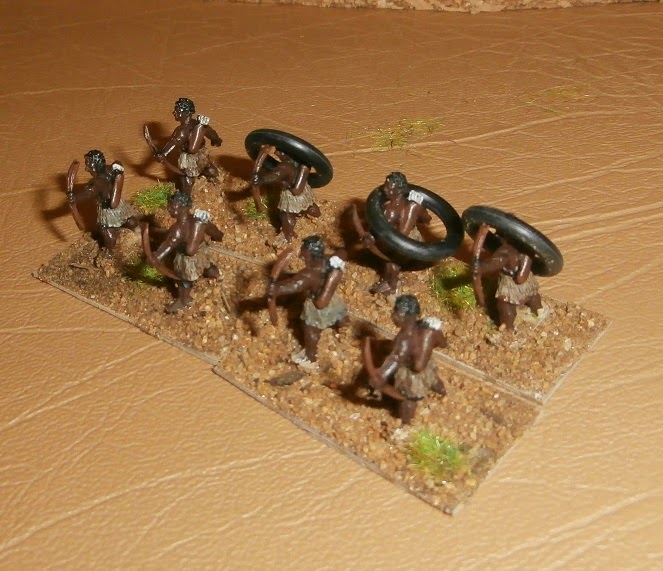 The manage to really pepper the Nubians with bow fire.
I'm trialing the use of rings for casualty markers. I think they might be too obtrusive. 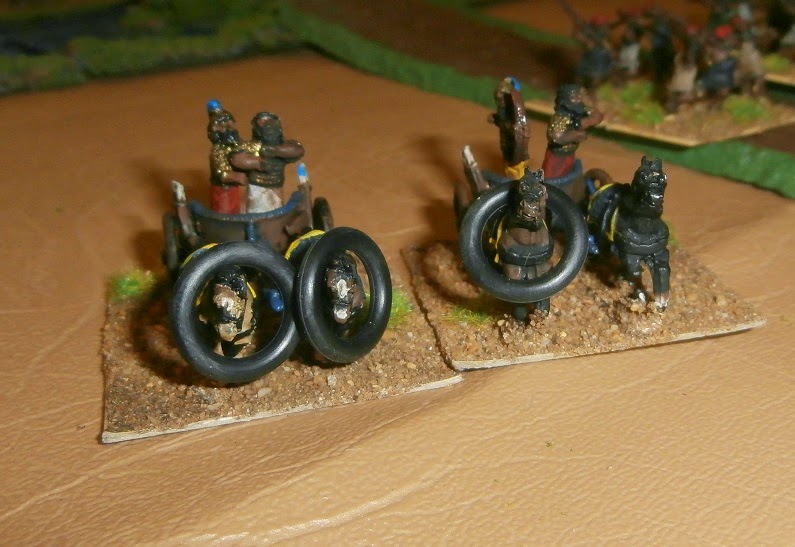 The Nubians and Re Chariots return fire
(and I think turned at least one chariot horse into a draft horse!) 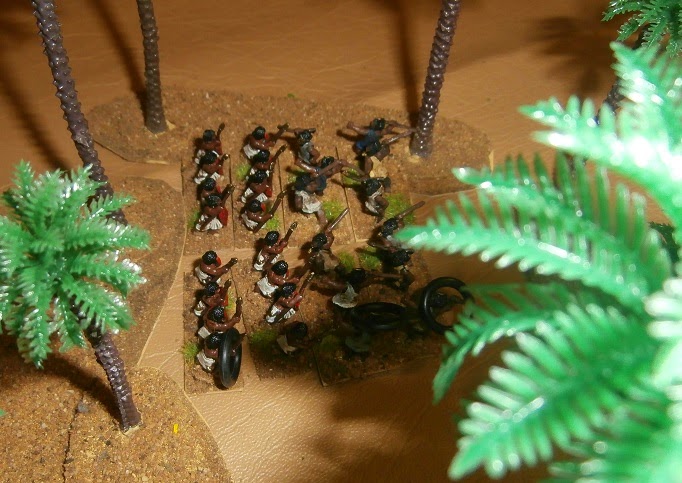 Eventually the Re Spear charges into the Black Spear! 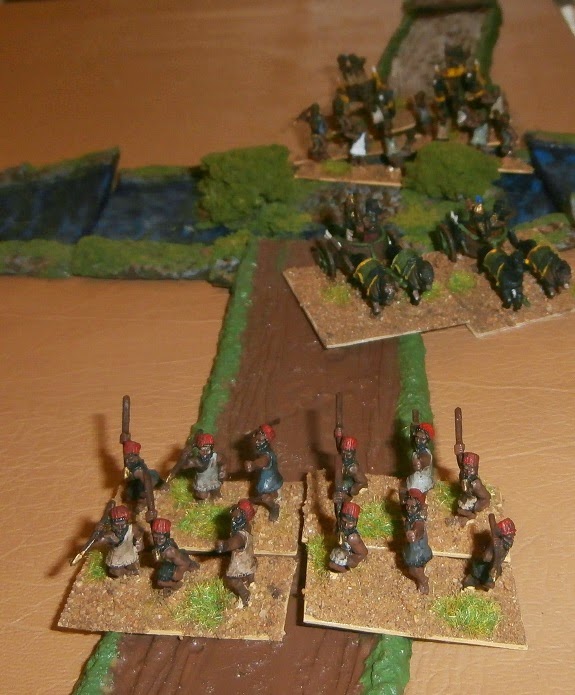 The Canaanite army pours over the river as only two of its units hold the entire Egyptian army. 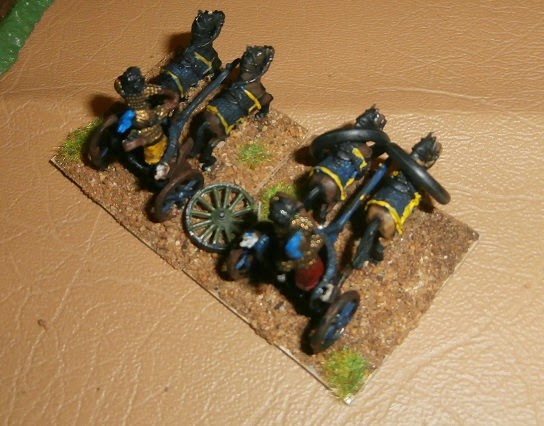 The Blue Chariots "Lose a base". Chariots are four bases strong but I only use two.
The spare wheel indicates that one base is gone. I might use chariot runners in the future. 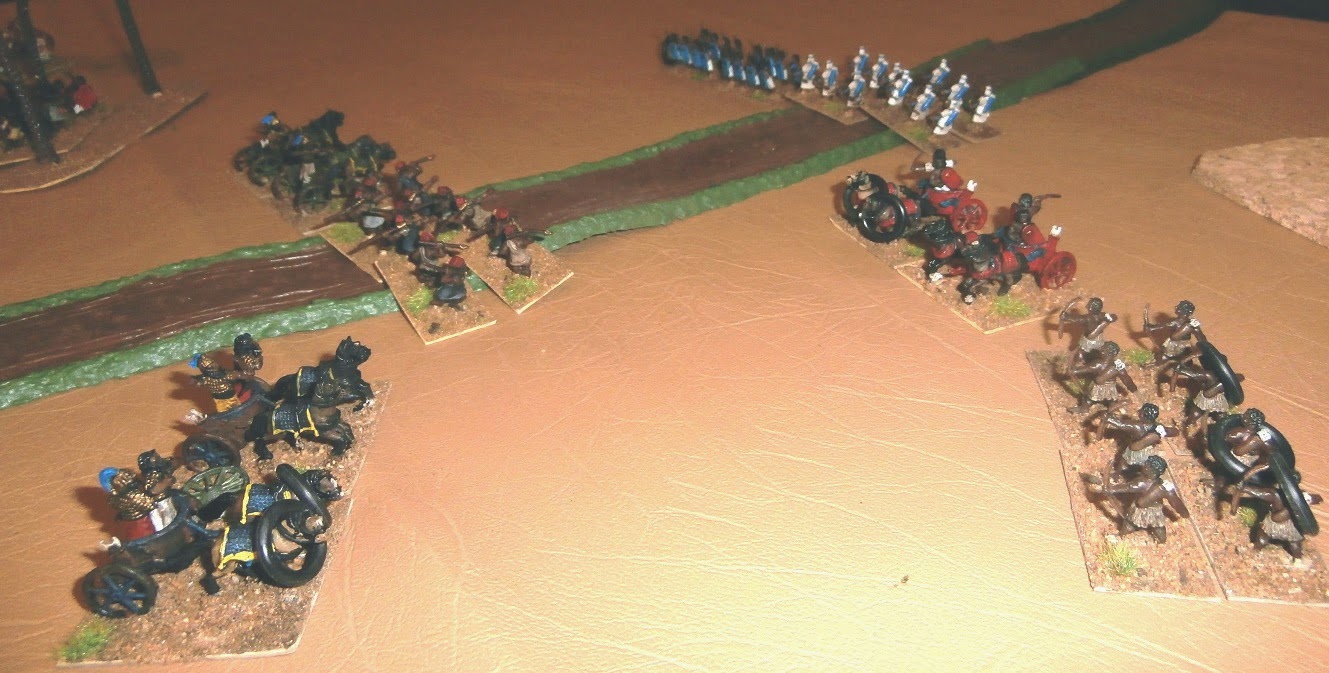 The situation by turn 7. Canaan on the left. Egypt on the right.
Things are looking good for then Egyptians with the Blue chariots being shot away on their left and the Re spear have gained an advantage against the Black spear in the Date plantation on their right. 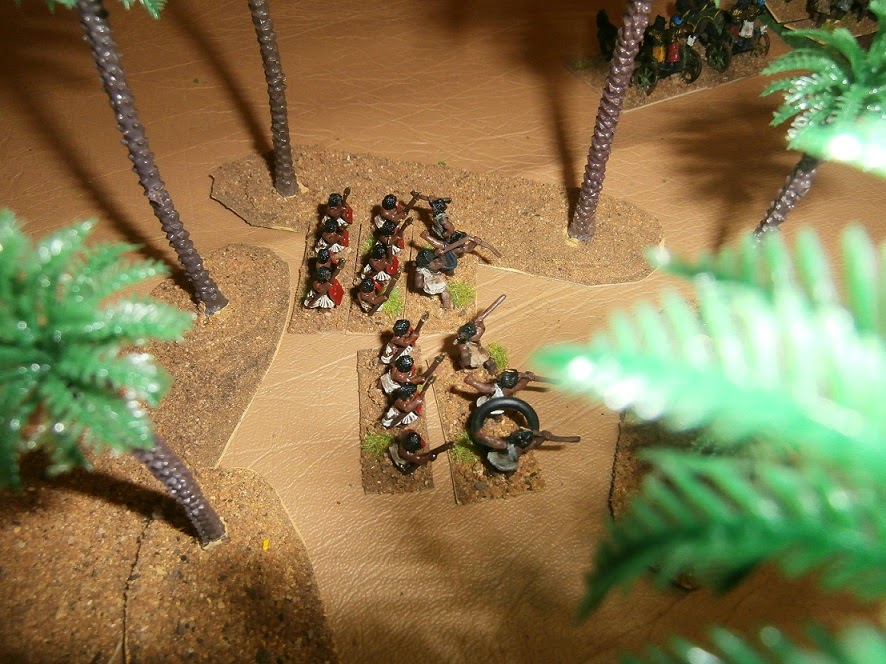 The Re has manage to gain the upper hand over the Black spear. 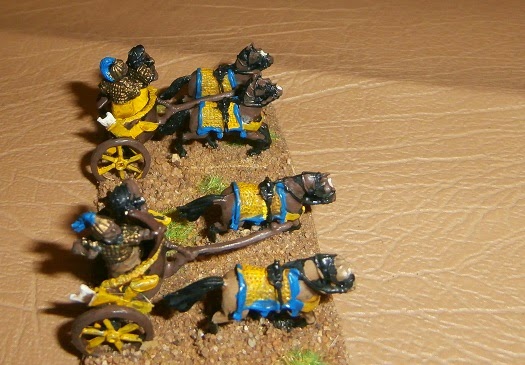 The Yellow Chariots have swung onto the Egyptian left flank firing at the Nubian bowmen. 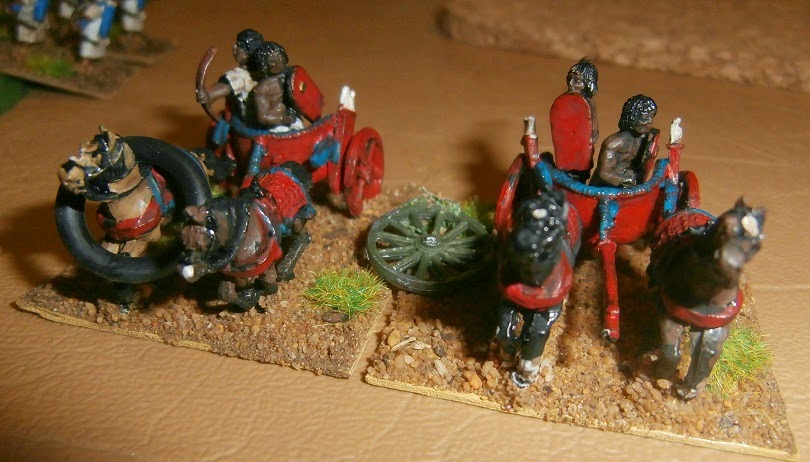 The Re Chariots lose a base from bow fire! 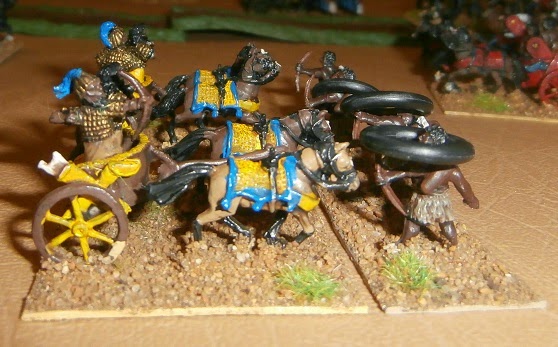 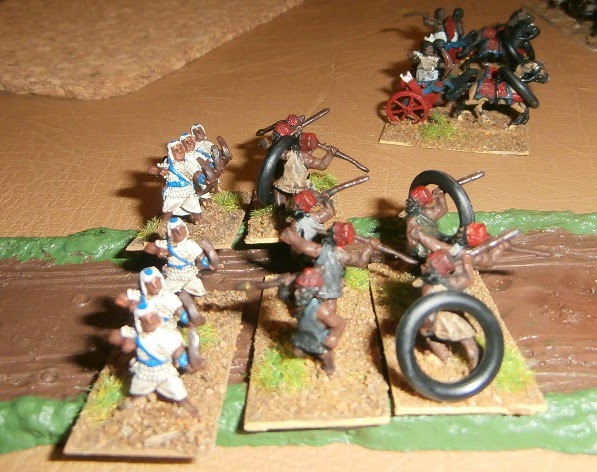 The Red Spear ignore the casualties they have taken from shooting and charge the Amun Archers.
They halve their numbers in one turn. 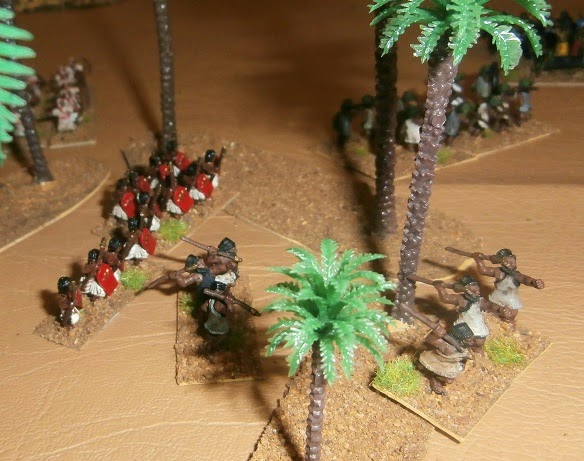 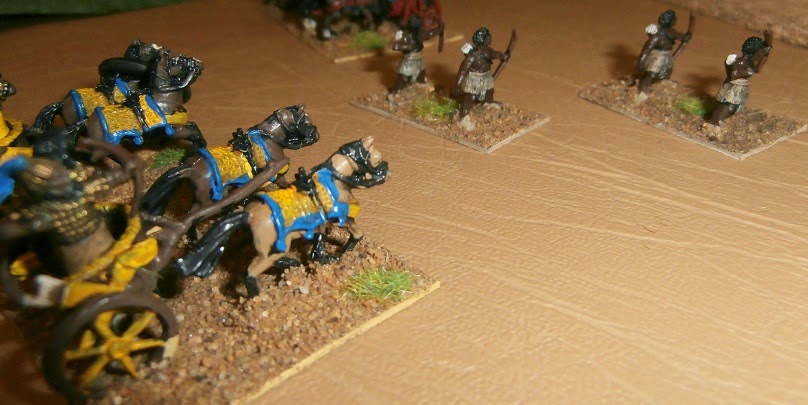 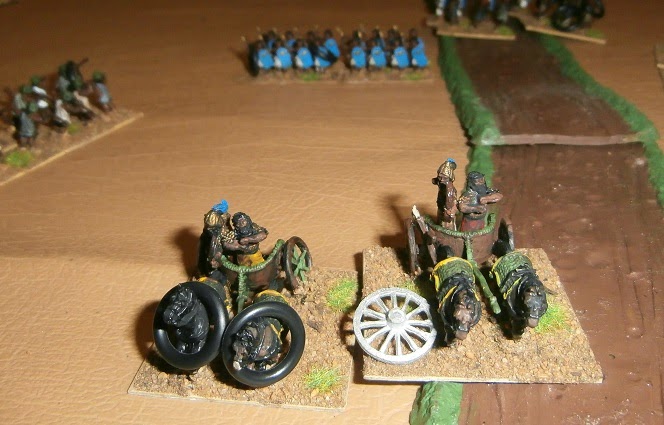 The Canaanite Green Chariots charged the Amun spear.
Got roughly handled by them and rallied back shooting.
The silver wheel indicates they have lost two bases. 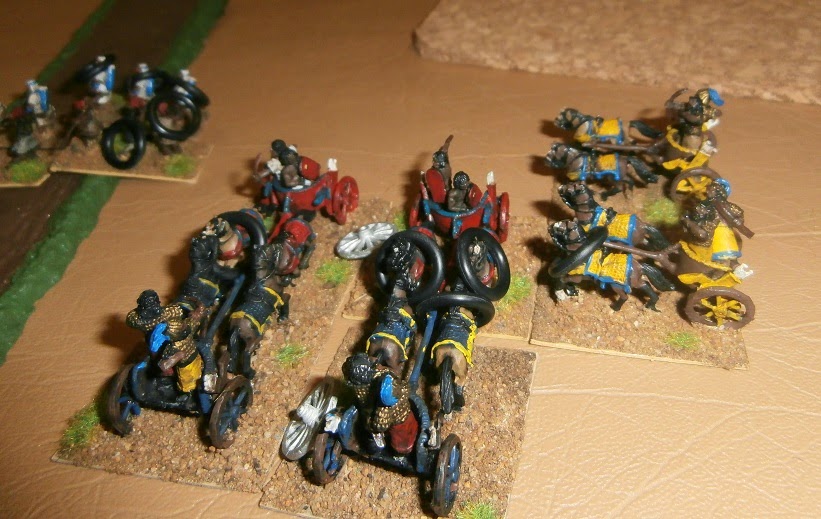 The Canaanites charge the Re Chariots. 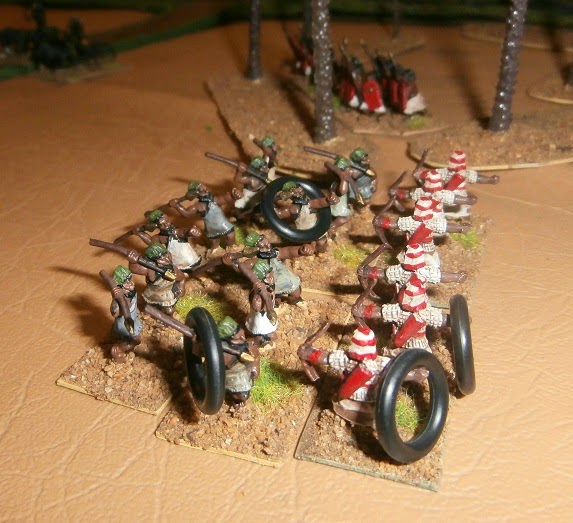 The Green Spear charge the Re Archers and things don't
look good for them losing two bases at first contact.
The Re spear are in the background trying to get onto the Green flank. 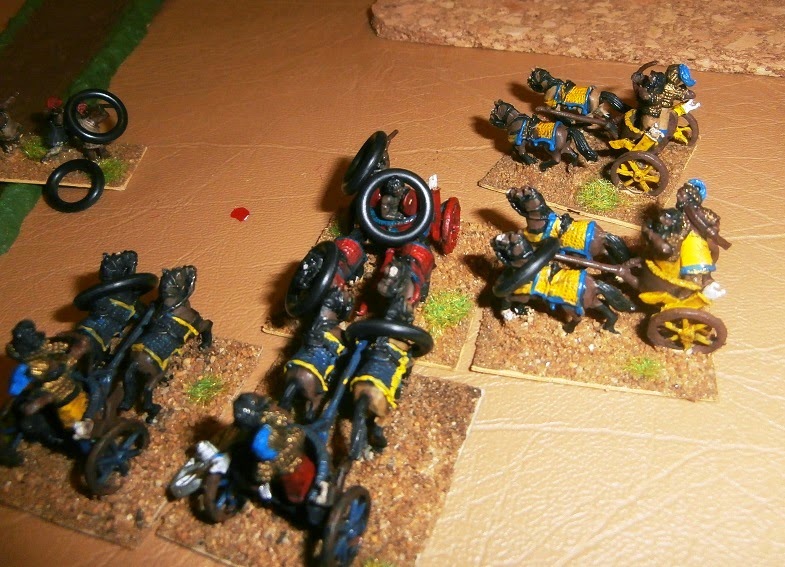 Now down to one base but there will be no rescue. 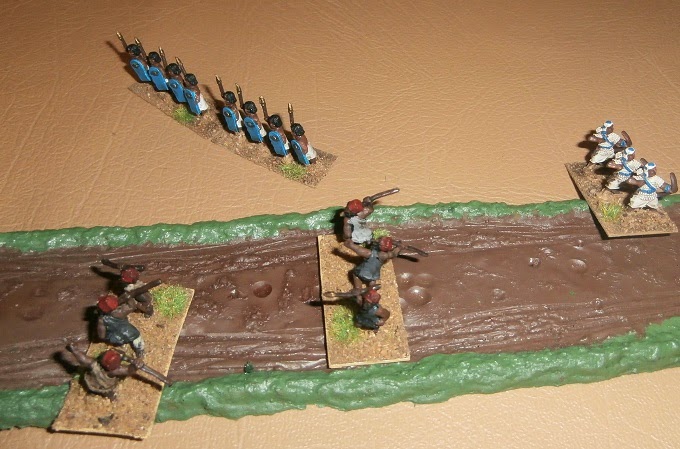 Both the Red spear and Amun Archers decide to leave the battle field. 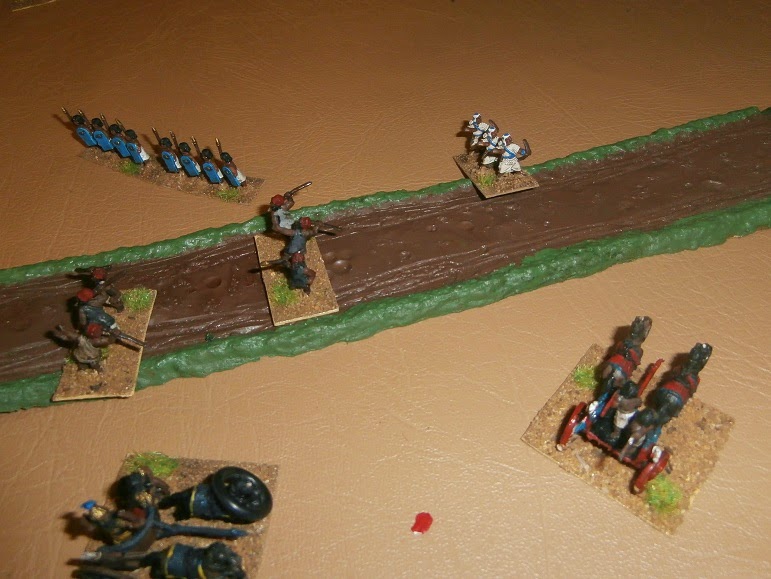 And the Re Chariots finally rout.
At this Egyptians decide to quit the field.
﻿
﻿

What a fun  game! The scenario and its randomness really added to the enjoyment. The rules really reflect chariot warfare nicely. Light chariots zoomed around causing casualties and hampering movement but came unstuck when they charged the closer order foot!
﻿