Neil Thomas's book "One Hour Wargames" Comes with 30 excellent scenarios. I've been itching to try them out but made some adjustments for the type of game I wanted. First I added some simple random terrain rules. Then wanted  to avoid having to mark or bookkeep up to 15 pts per unit so changed the combat rules to opposing dice roles and full base removal. (Works out to about the same as the original rules.) 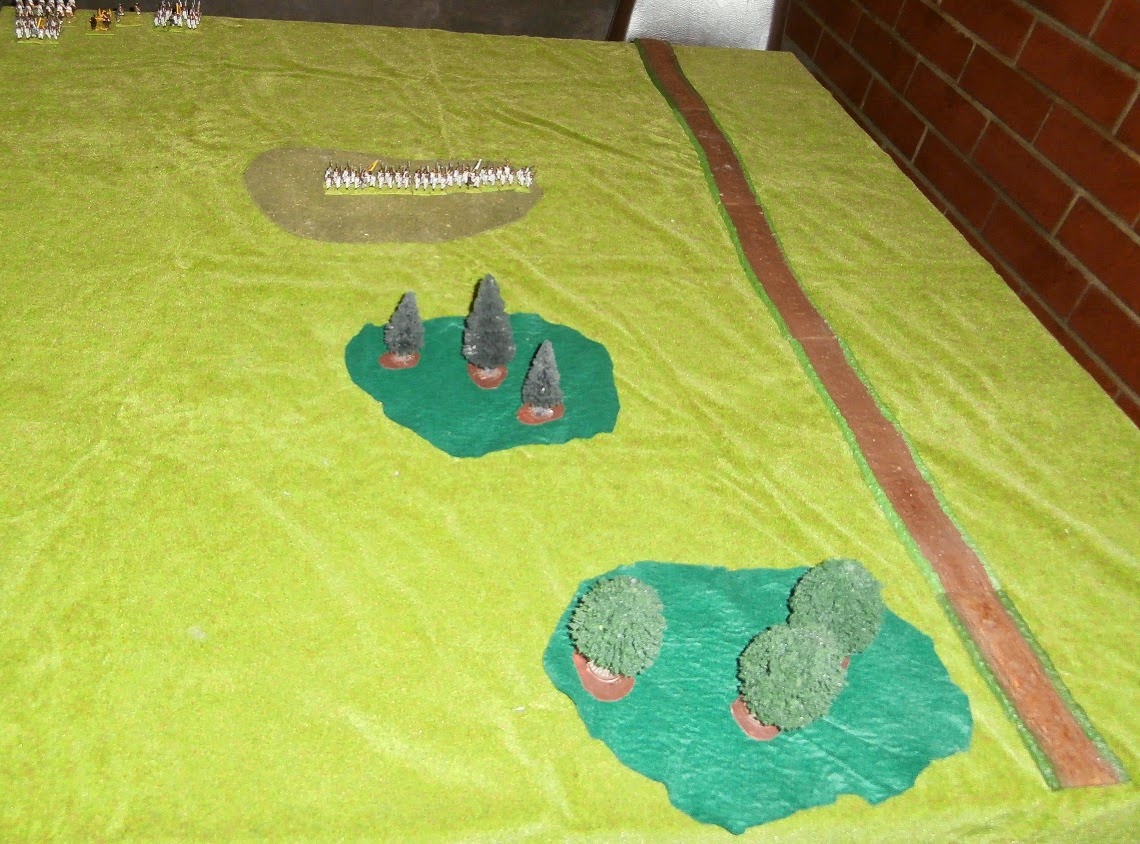 In the centre is a hill that's the object for both sides, looking north.
The southern wood was a random selection.
The Austrians have 4 Line Battalions, a Dragoon Regiment and a 6pndr Gun.
They set up with two battalions defending the hill.
After dicing for force composition the French ended up with 3 Line Battalions,
two skirmishers and a Battery of 8 pndrs. 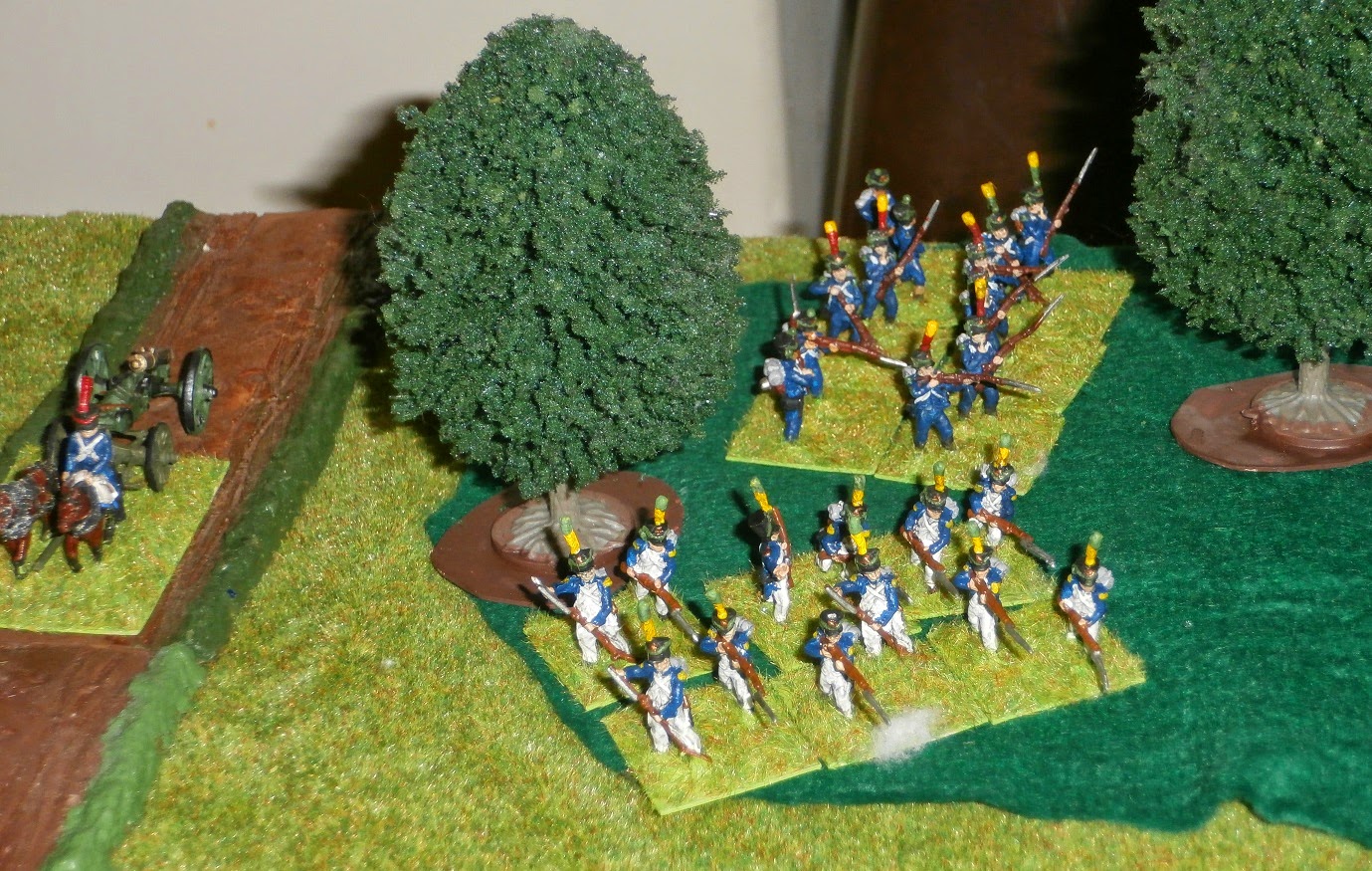 The French bring on the artillery and both skirmishers. 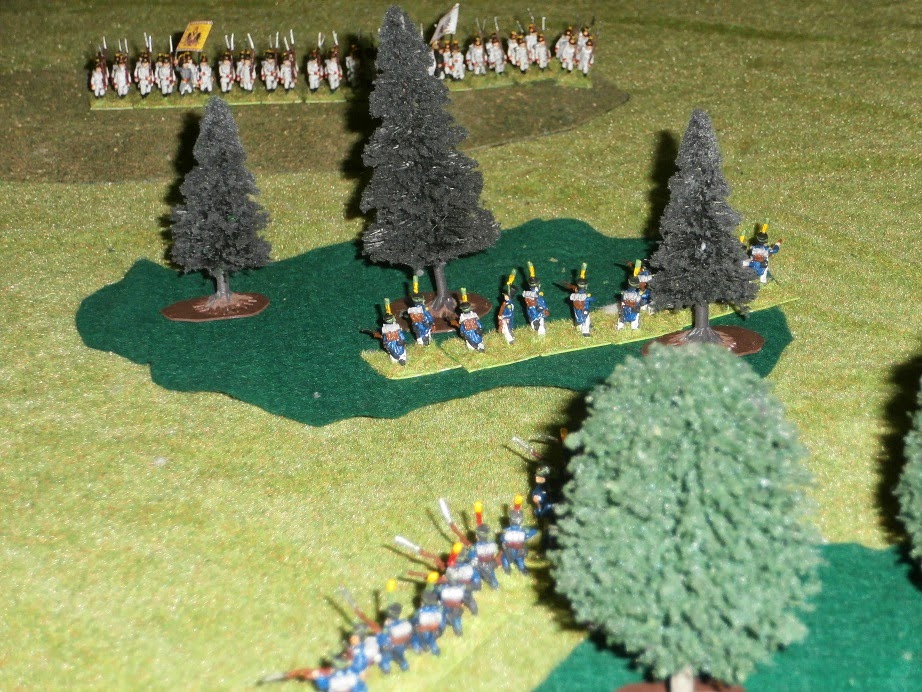 The French Voltigeurs advance using the woods for cover. 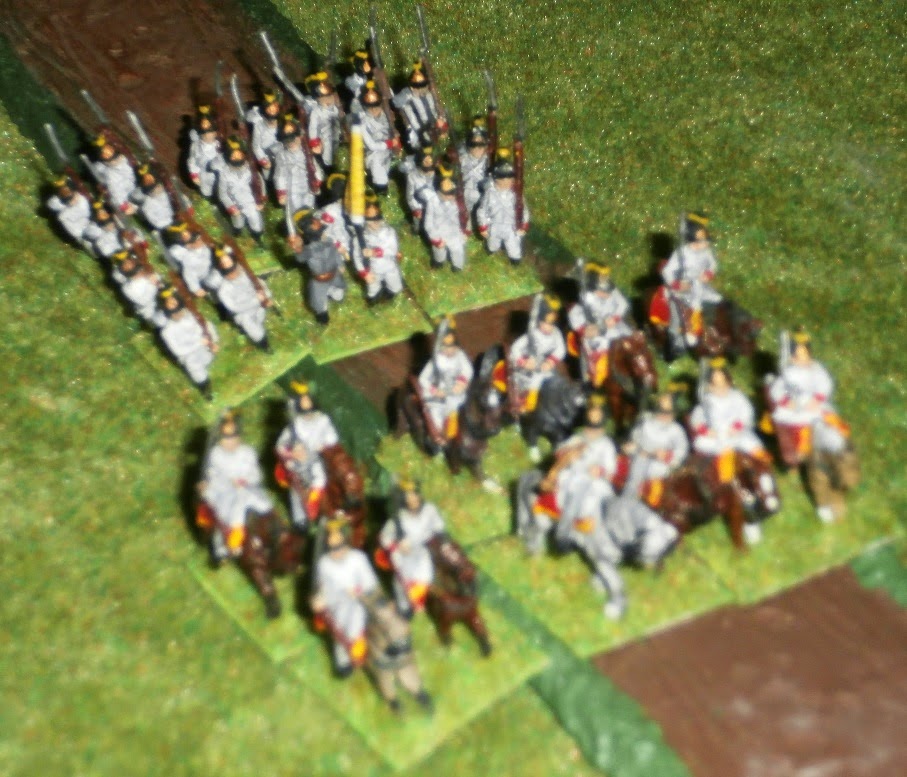 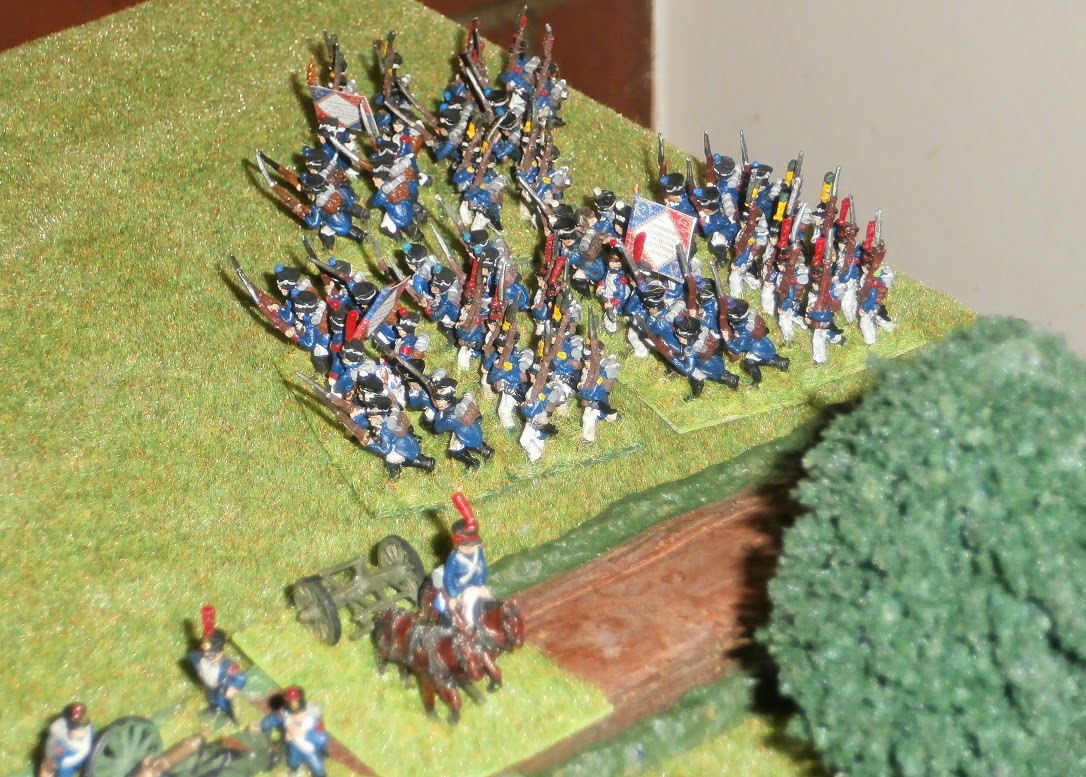 The French line regiment arrives.
Hemmed in by the wood they are forced into the bottom corner of the field. 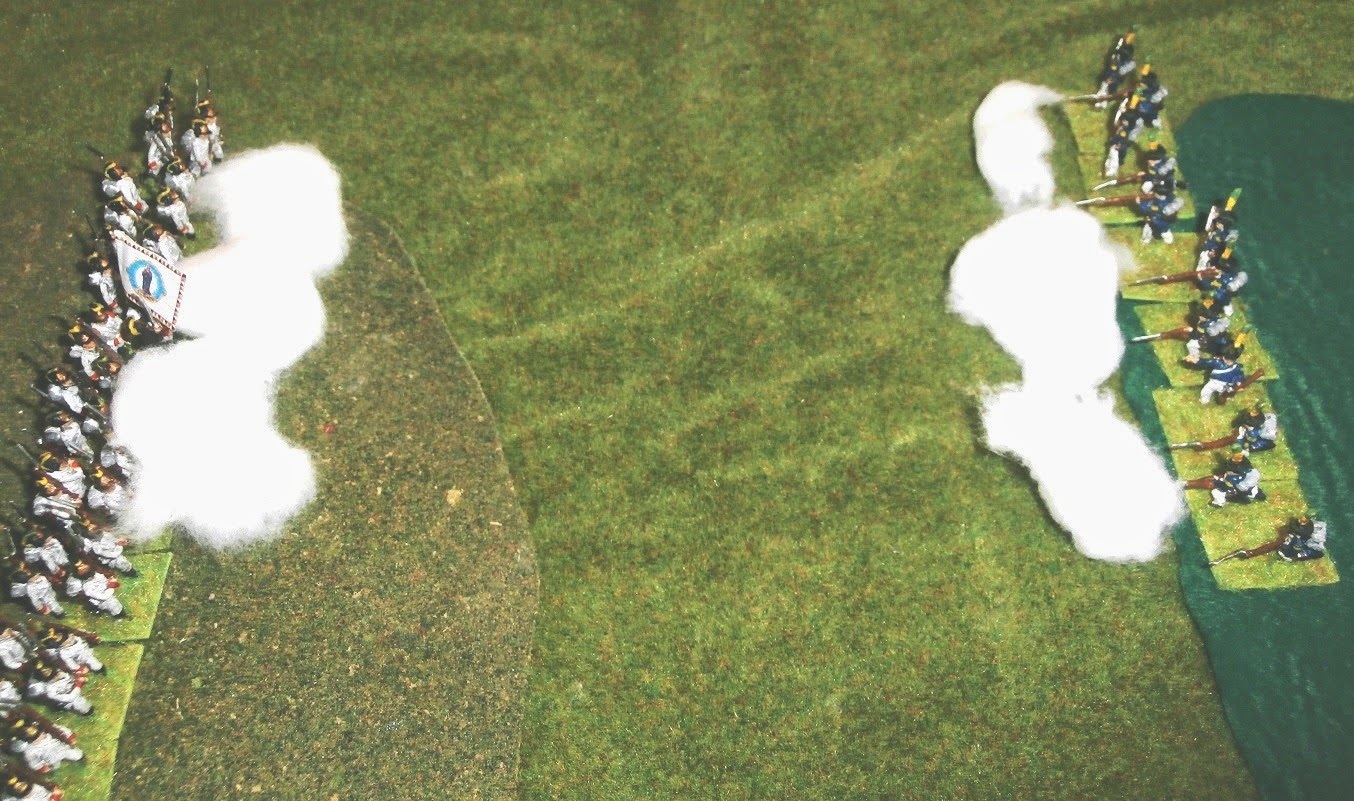 The Voltigeurs and the Austrian 1st Line begin a  shooting duel
that will last the majority of the game and end with them both depleted. 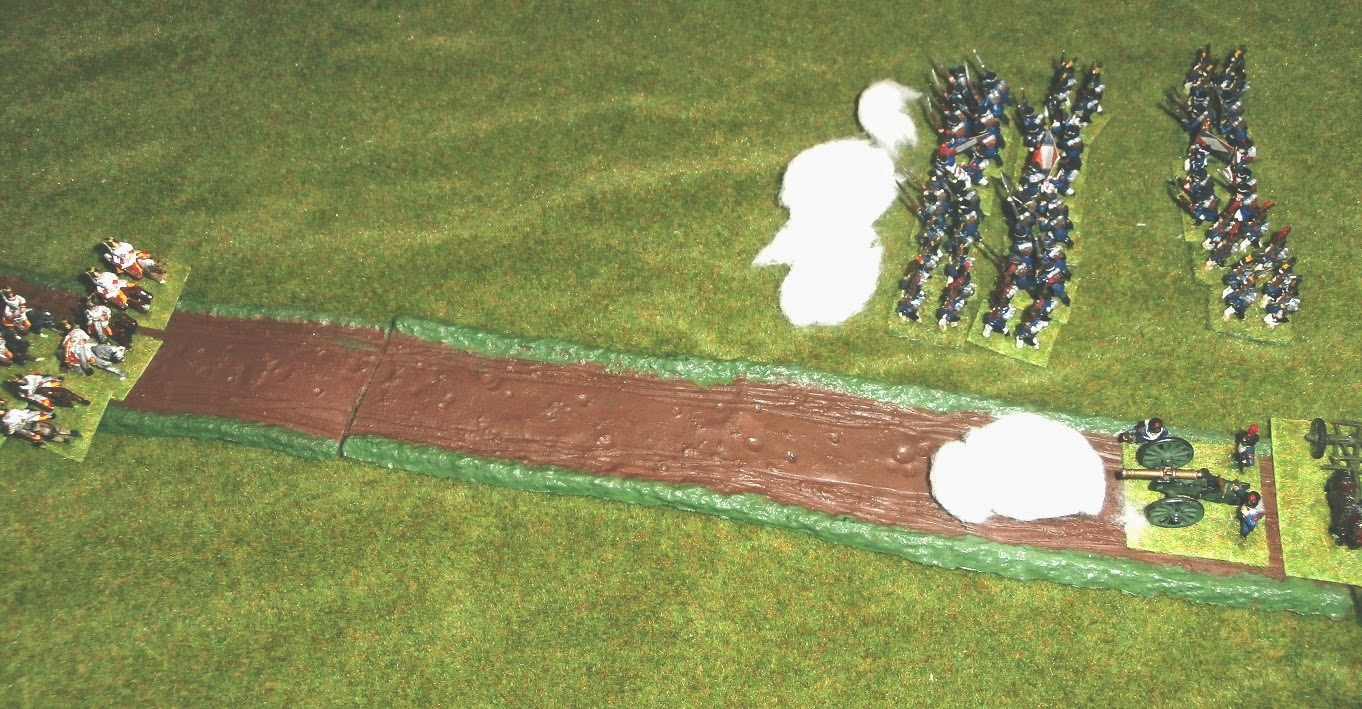 The Dragoons gallop straight down the road directly at the guns.
Taking fire from everyone they don't care! 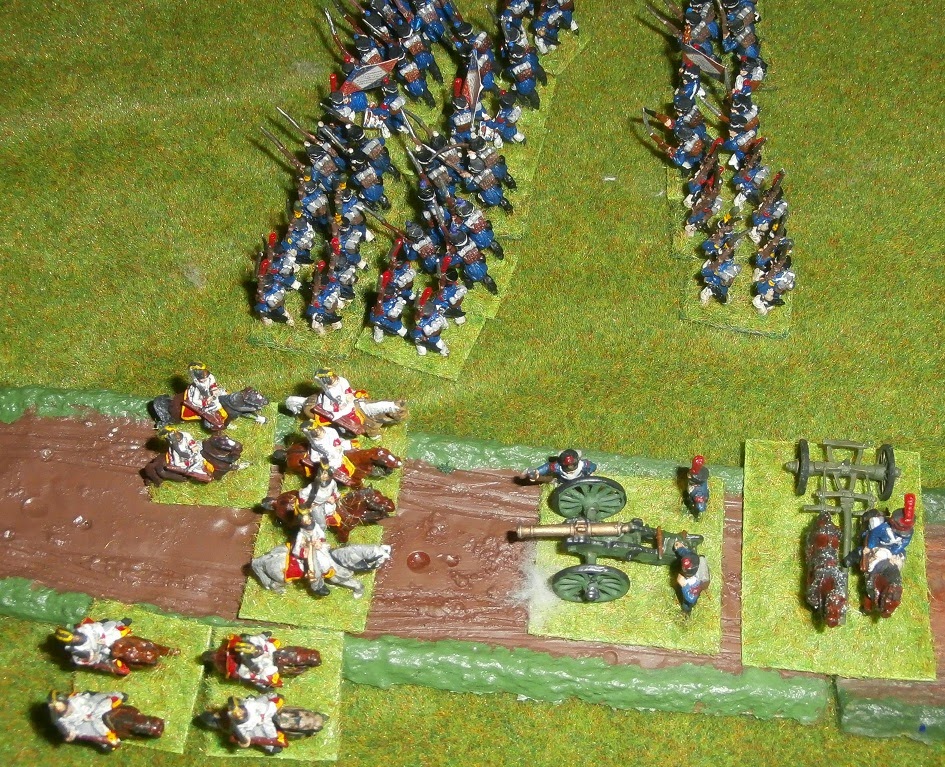 And end up one inch short of reaching the French guns. 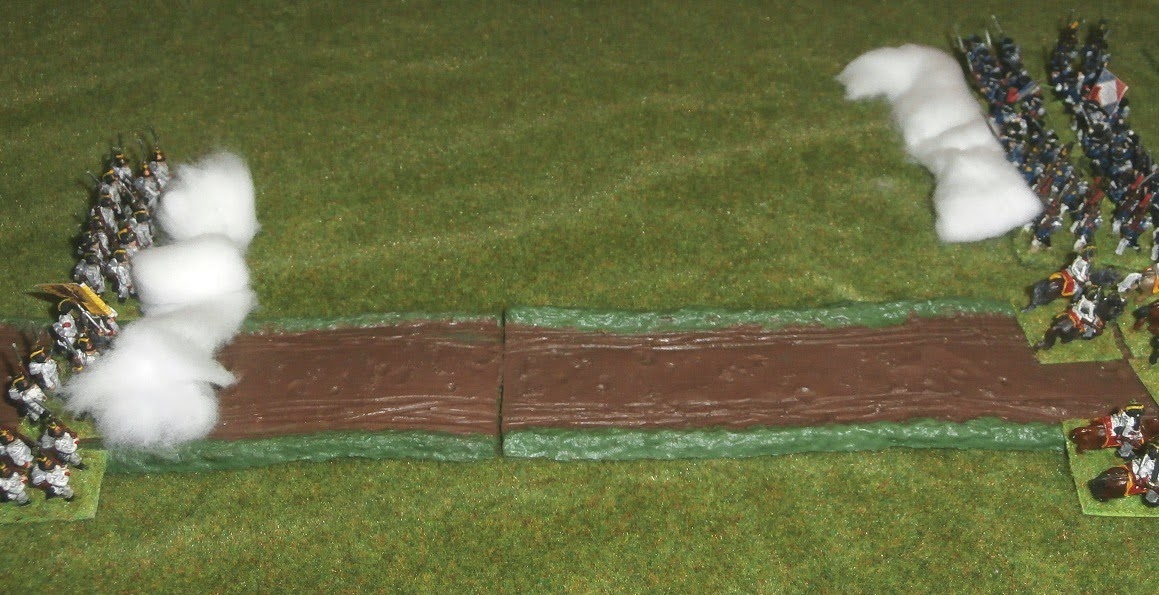 Their supporting infantry do their best to take some of the pressure off! 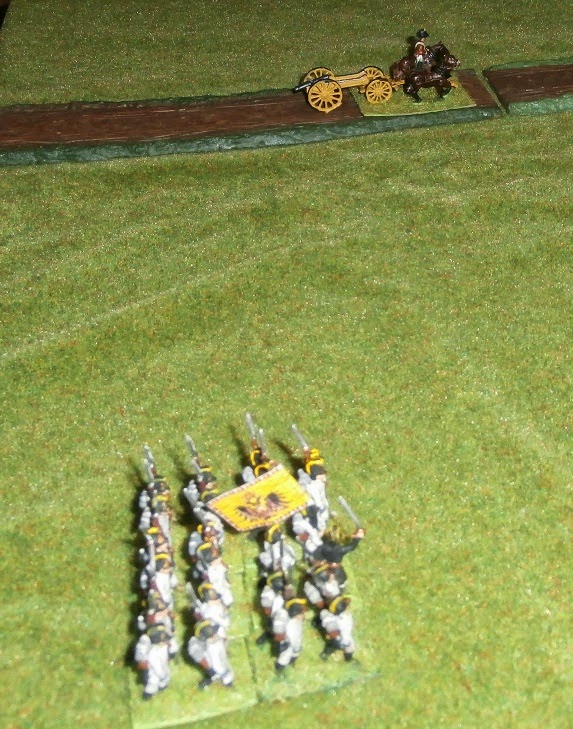 The last of the Austrian Brigade arrives. 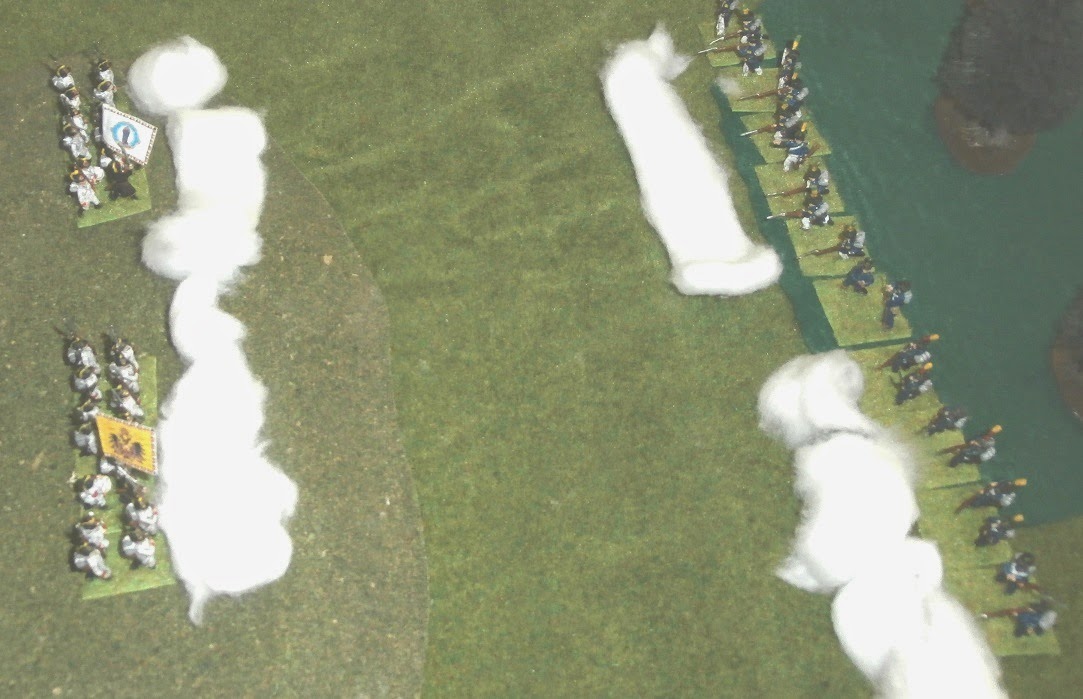 The musket dual for the hill is intensive with the woods giving
the French an advantage.  Both Austrian battalions have taken losses with
the first near to dispersing. 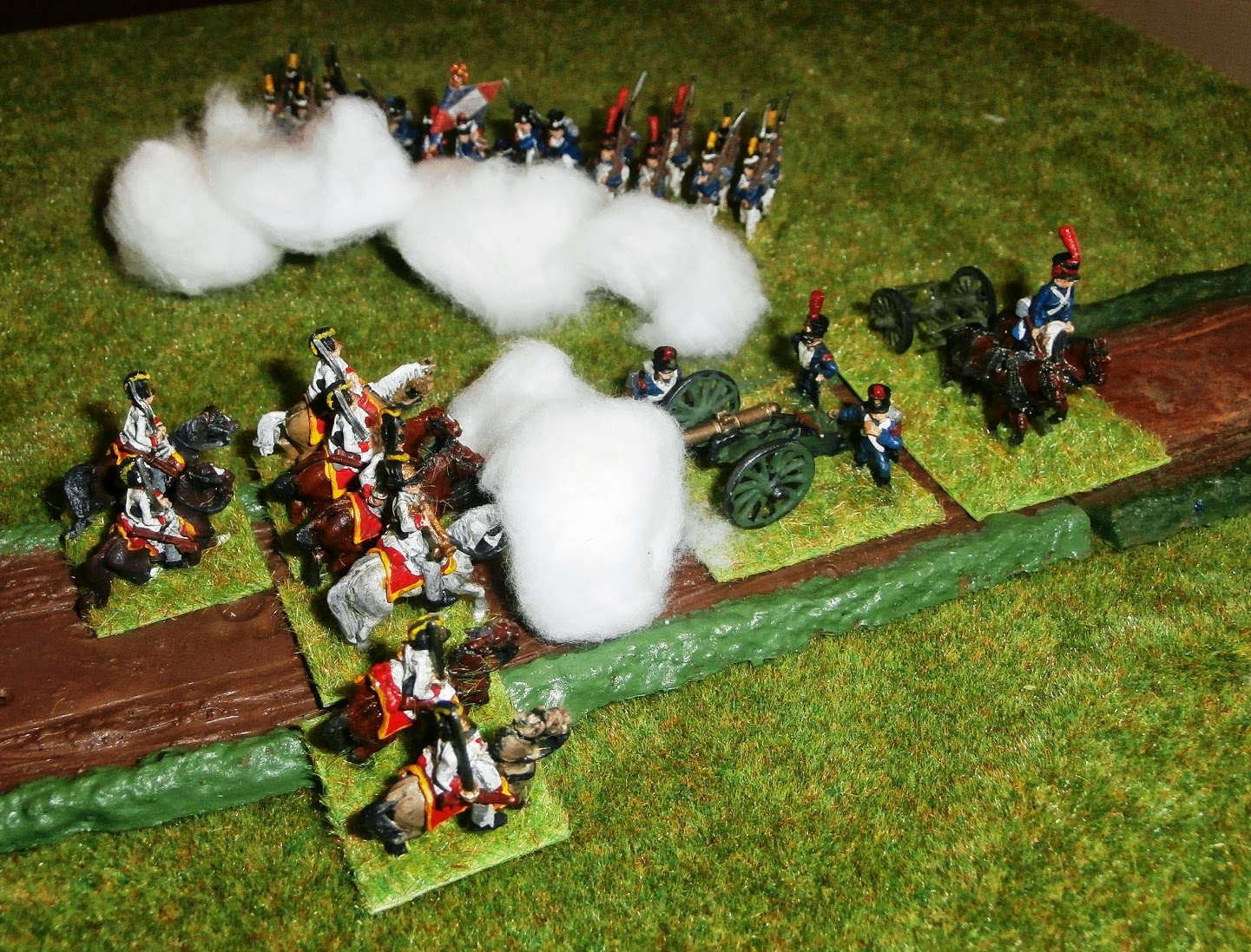 The dragoons take a loss from terrible close range fire. 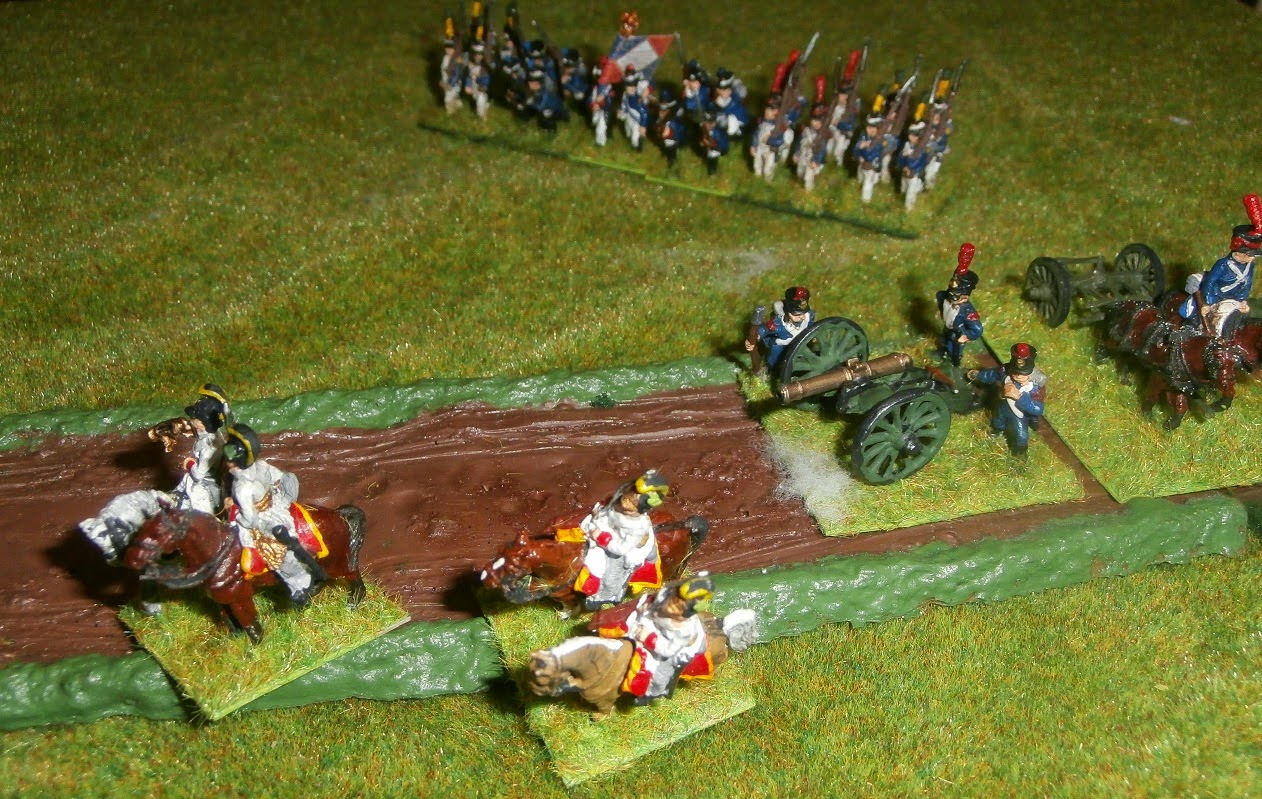 They charge! Loose and then fail a moral check!
The first unit to rout. 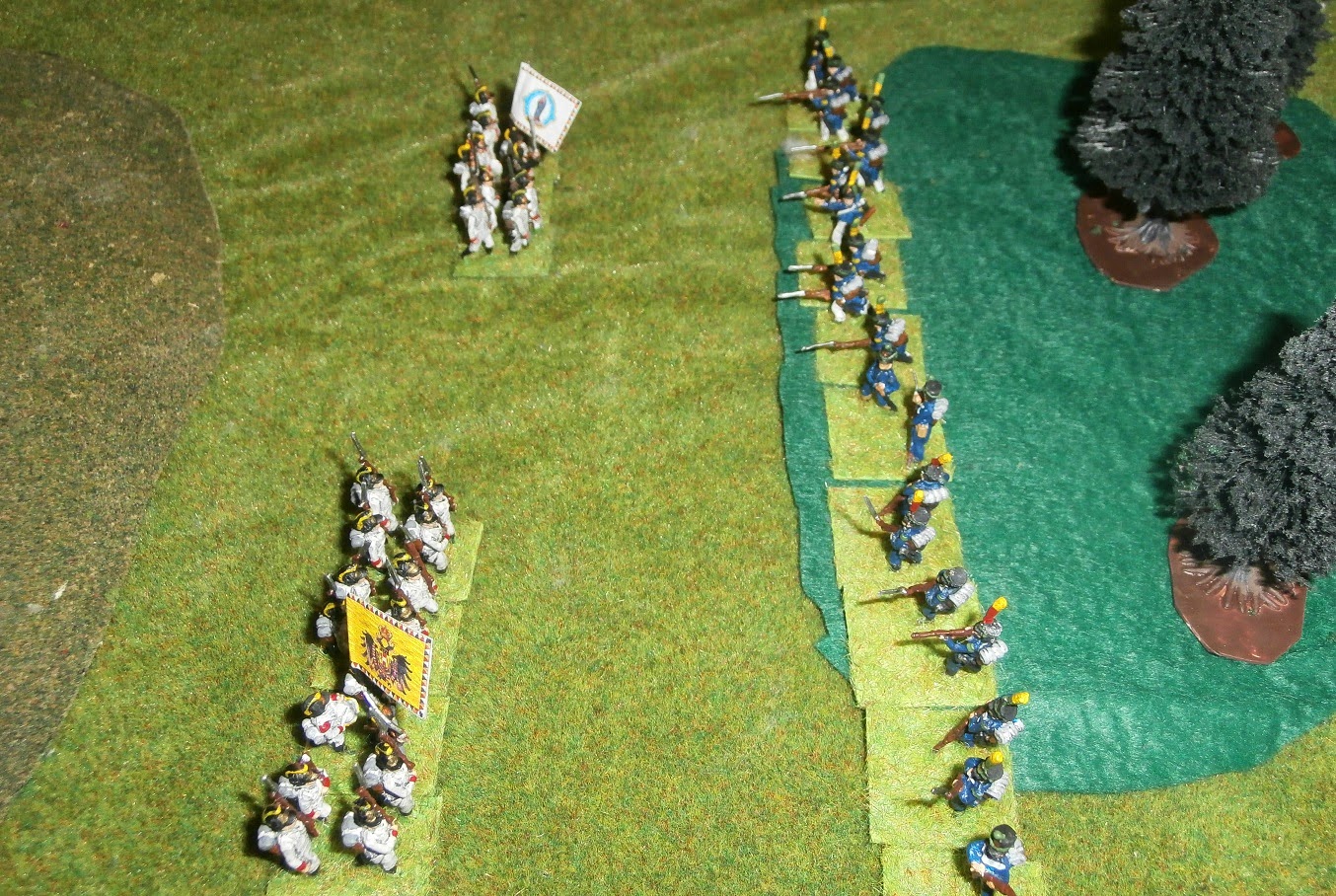 The Austrians have decided to disperse the skirmishers with the bayonet. 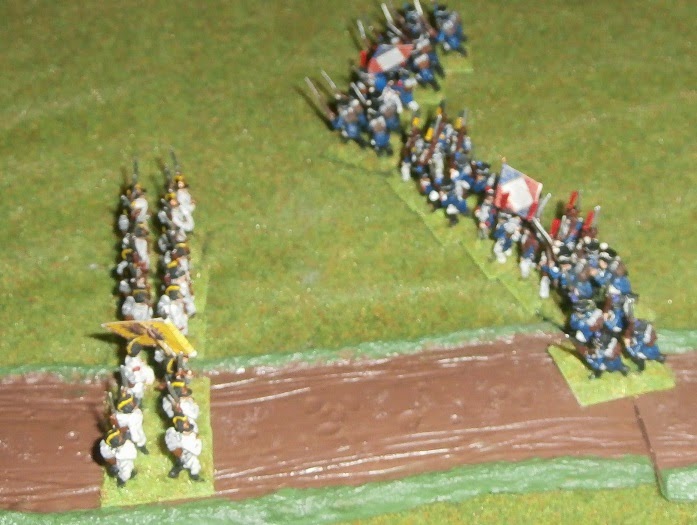 The French now have an overlap and a fresh Line battalion.

Another masks the guns as it heads for the hill.
At this point it looks pretty good for the French.
They have only had minimal losses and the Austrians have lost their cavalry
and have another unit one casualty from running. 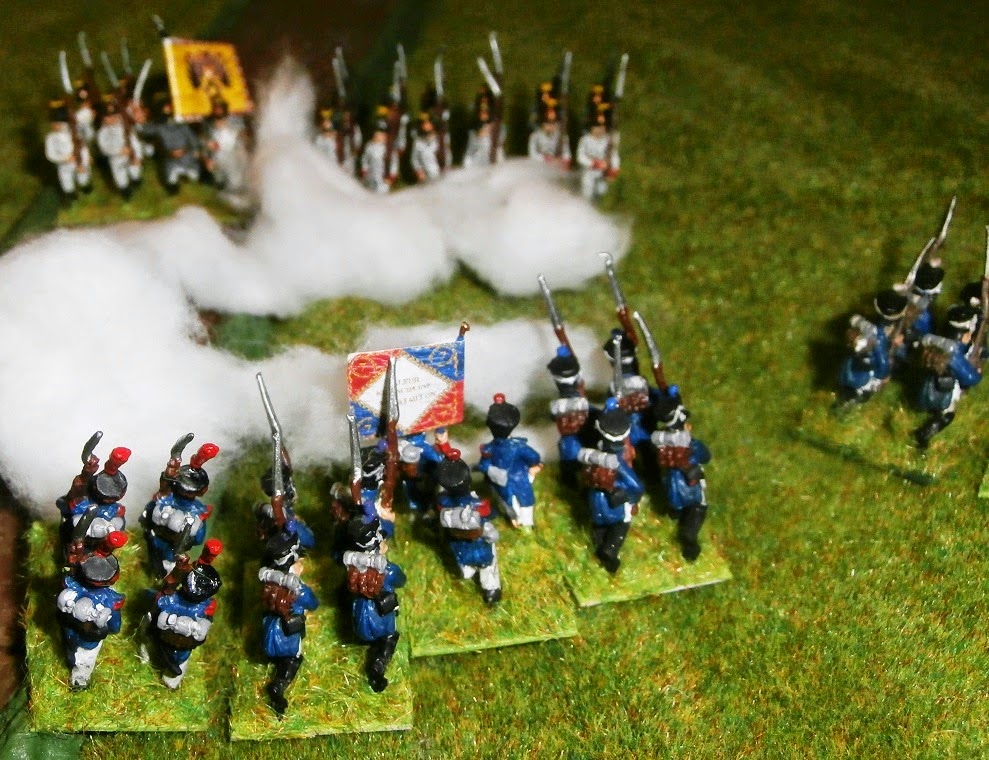 The Austrians in the east manage to cause a two base loss on the fresh French Battalion. 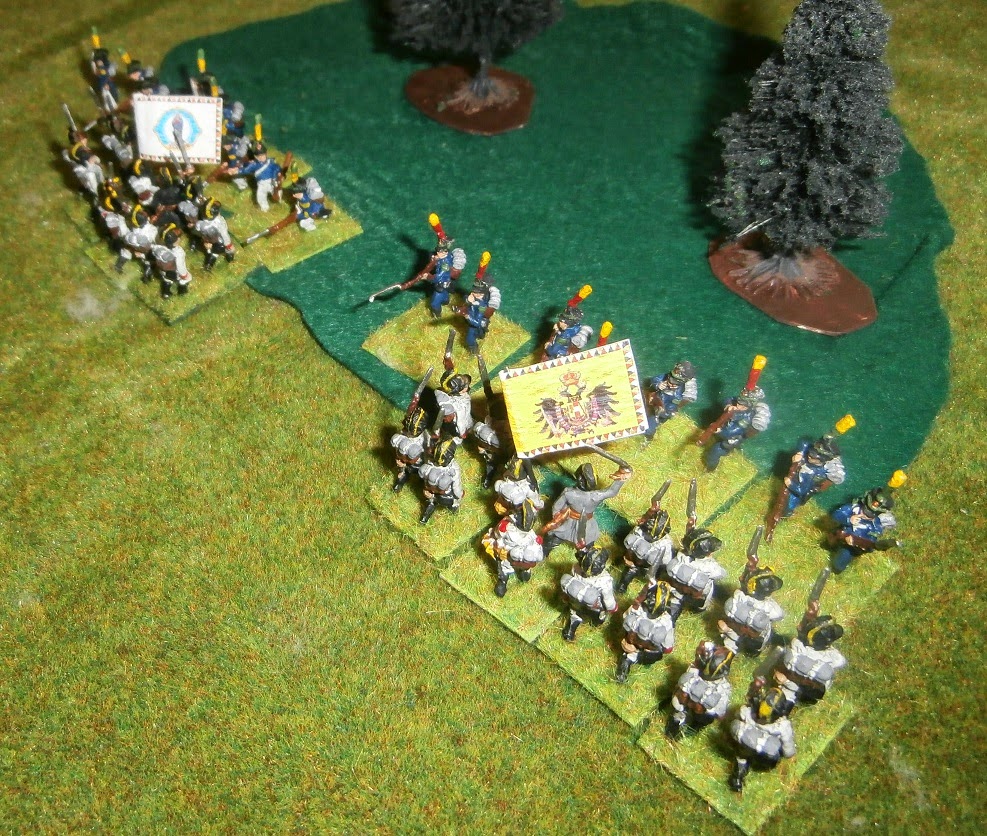 They then charge the lights in the woods. 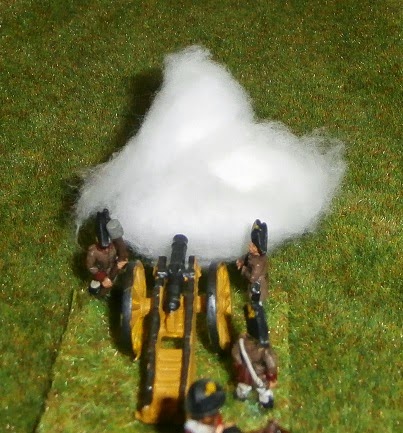 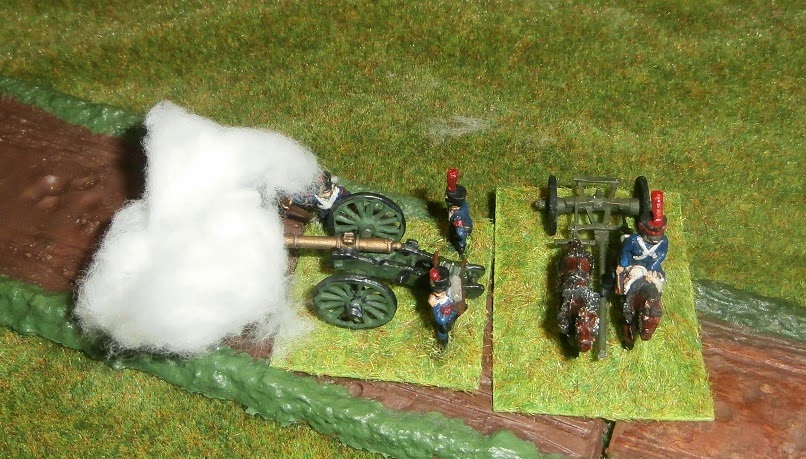 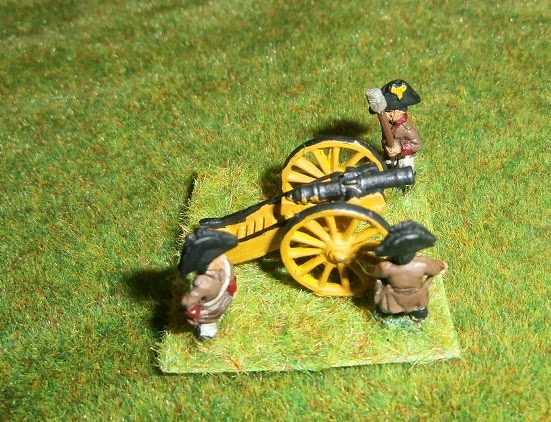 More bad news for Austria when a counter battery exchange results in the loss of their limber! 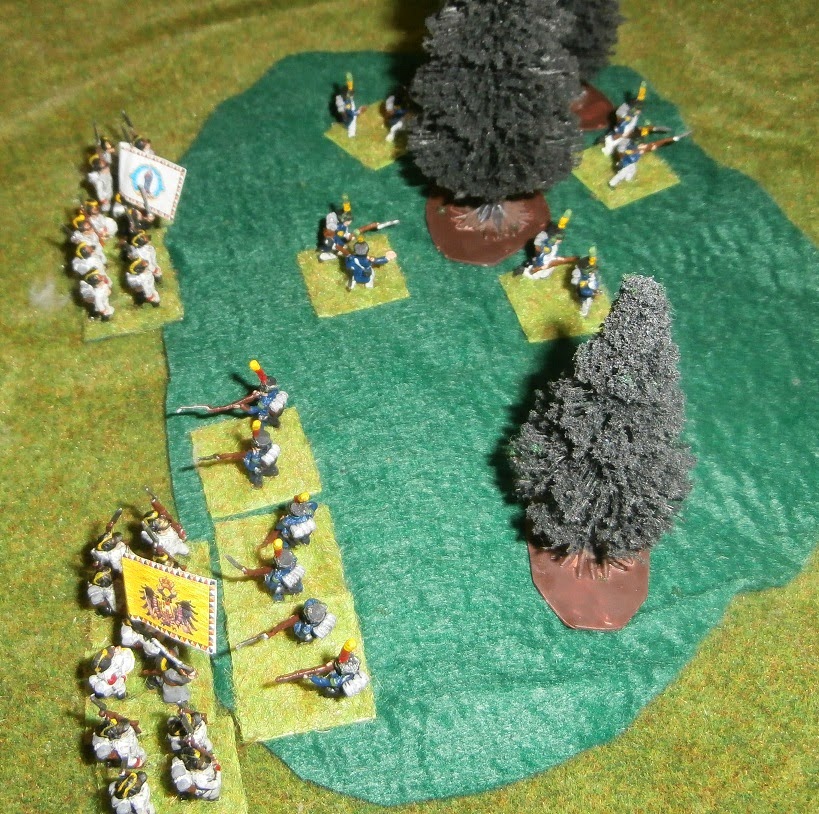 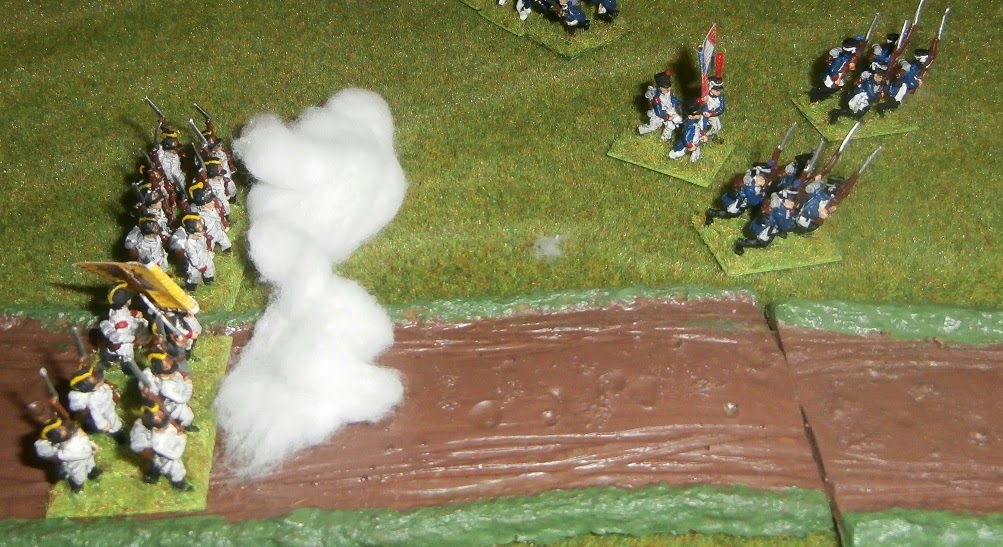 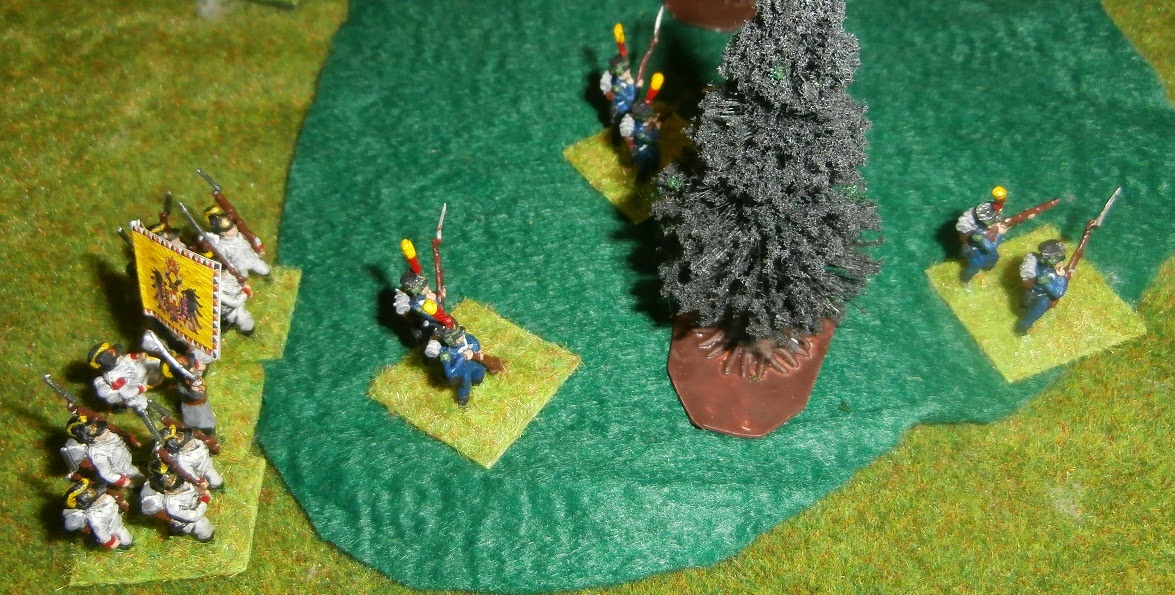 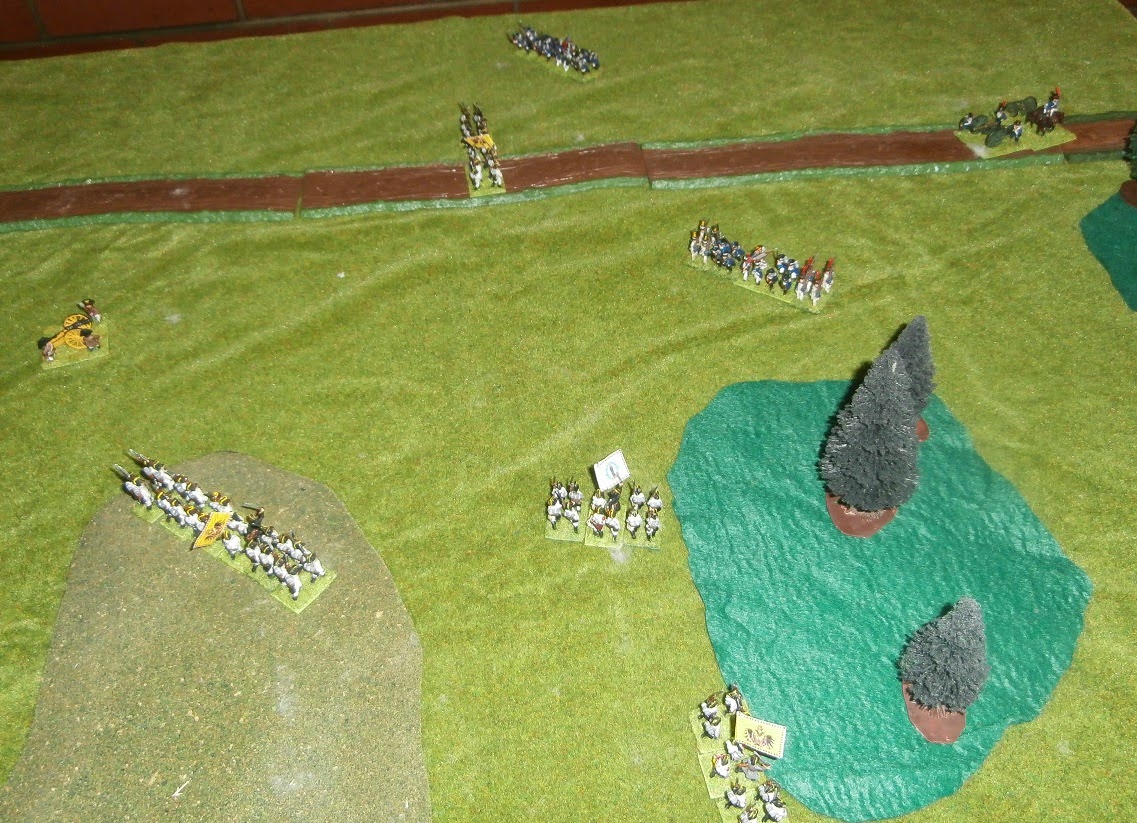 Suddenly the Austrians have the advantage of 5 to 3! 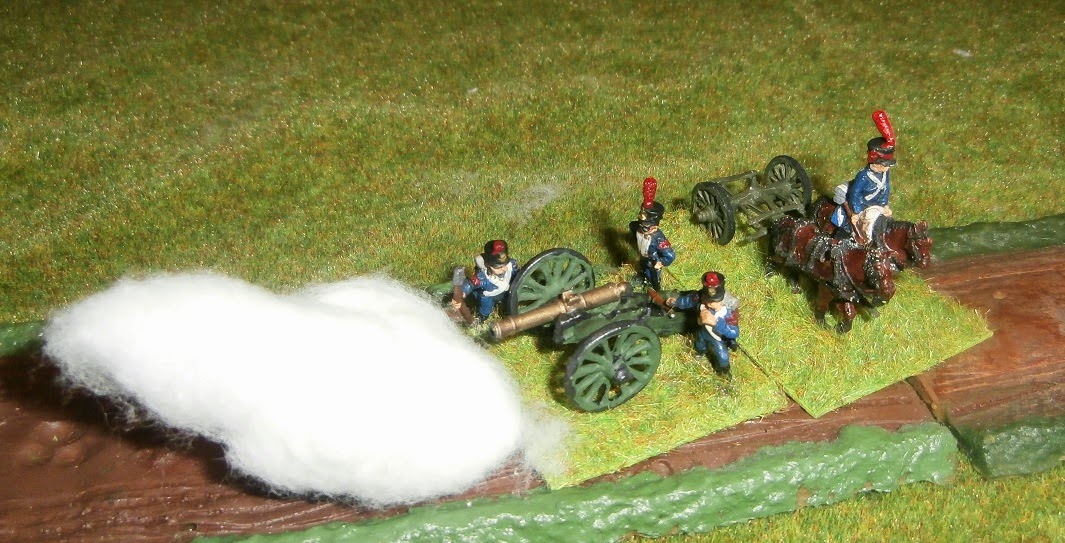 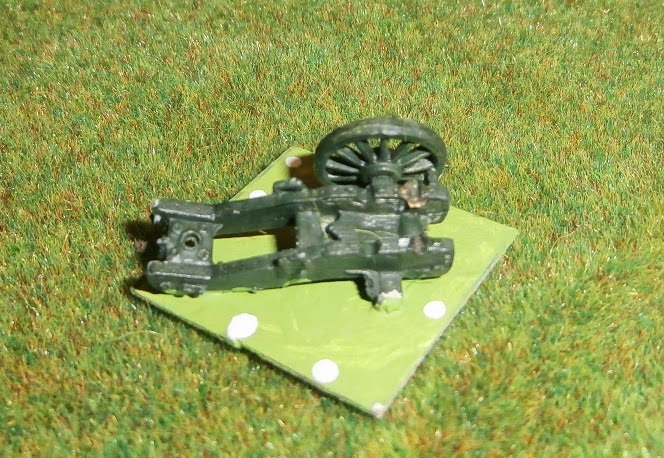 The French artillery is on target again and knocks out the Austrian 6pndr.
4 to 3 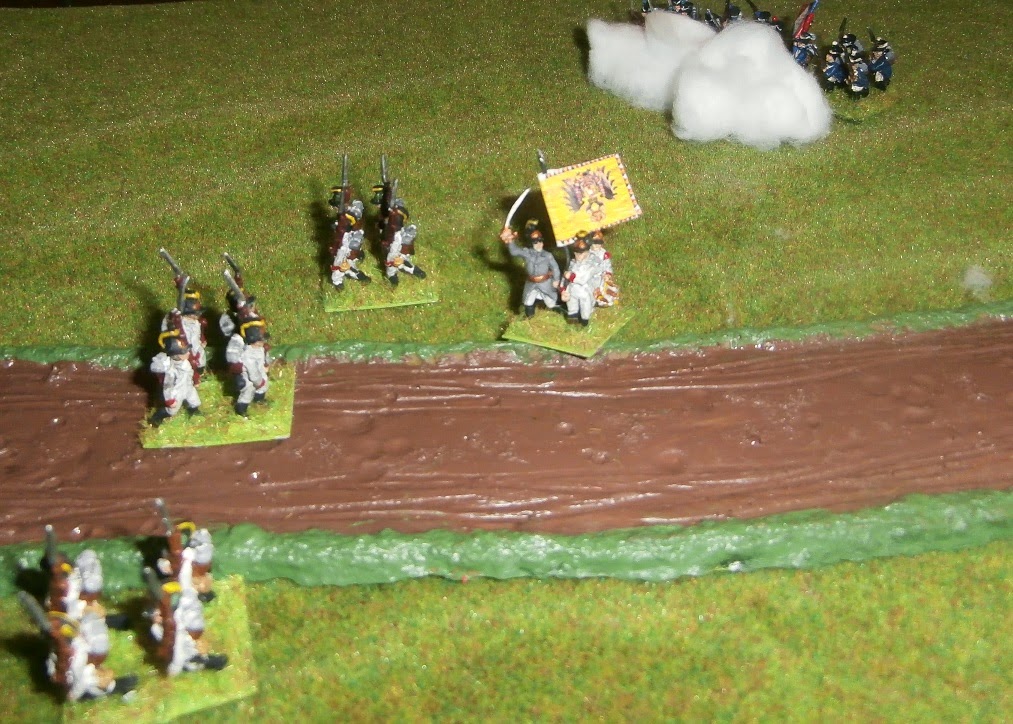 The Austrian 3rd Battalion, alone on the left flank finally succumbs to musket fire and breaks.
3 units each. 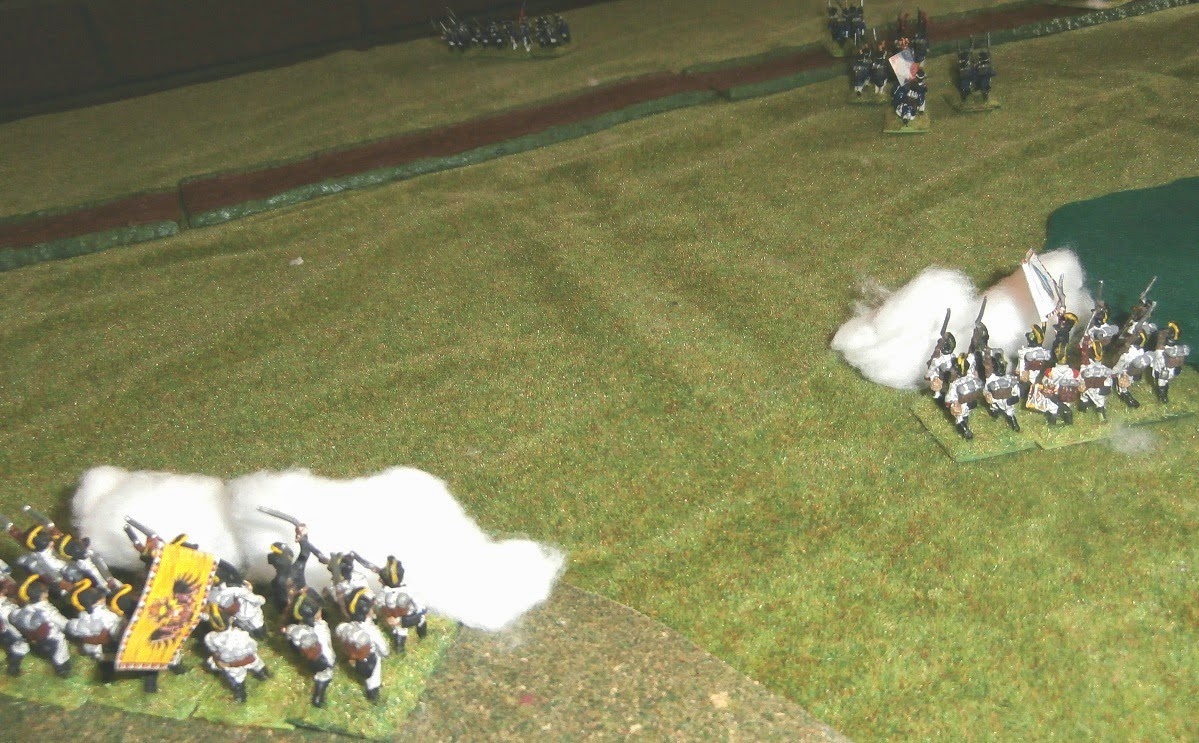 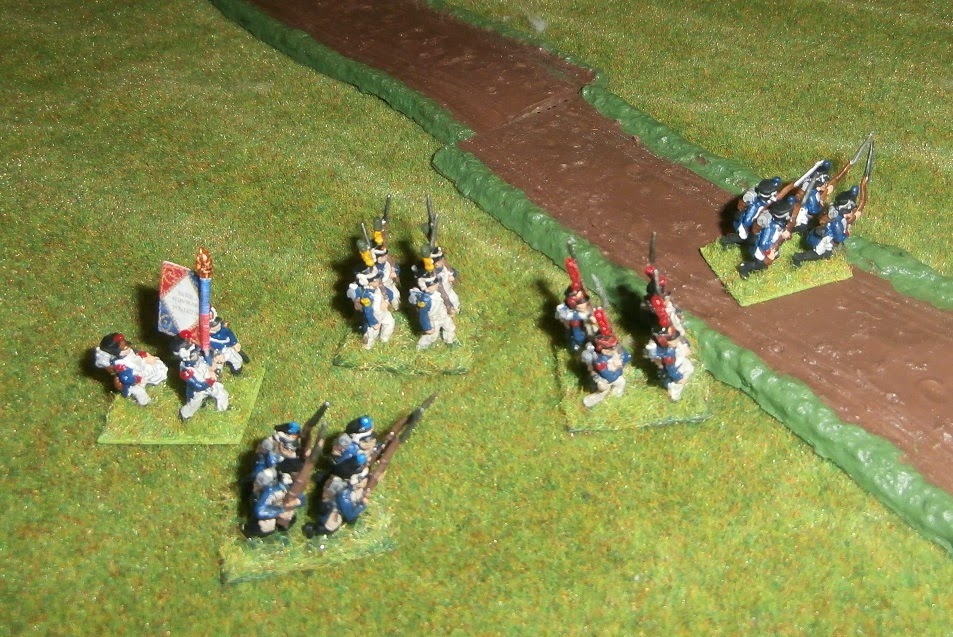 Next turn the Austrians rout the nearest French Battalion.

This leaves the French with just two units. a beat up Line Battalion and the amazing 8 pndr. 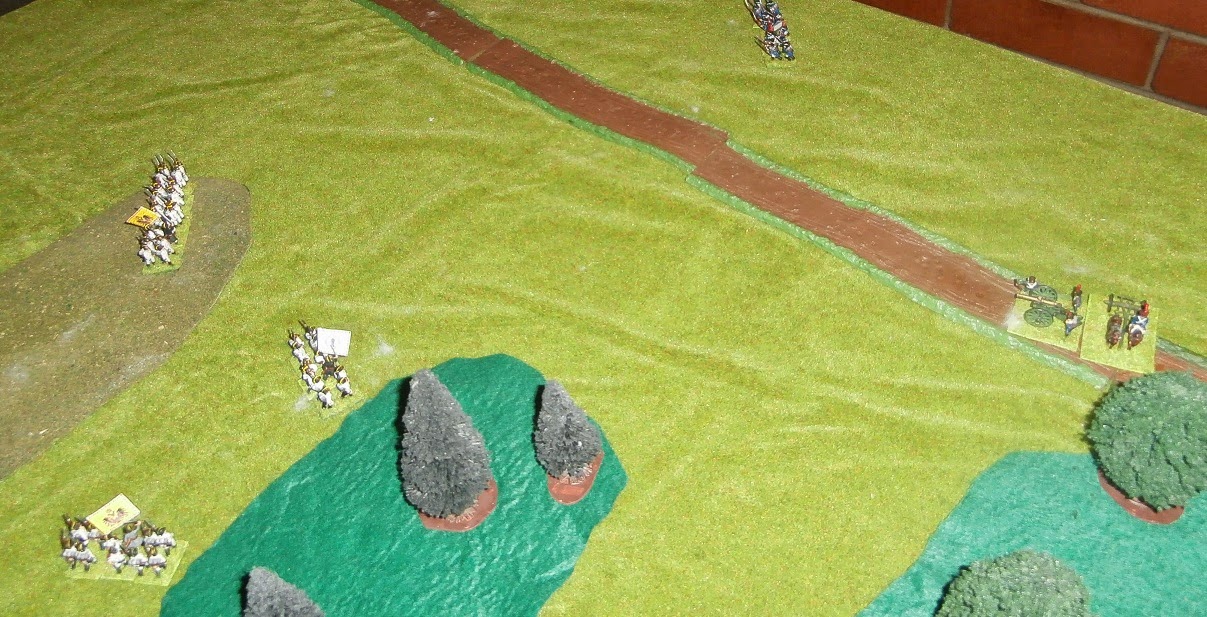 They concede and leave the Austrians with possession of the hill.
What an enjoyable game. Can't remember one where the fortunes swung so much so many times.
First it looked like the Austrians had the advantage with the army rolls then the extra wood forced the French into a corner with their entry point. This confidence in an Austrian victory may have triggered that impetuous, full length of the table, cavalry charge! The one that nearly cost the battle.
The scenario seemed simple but brought a great game. I'm more than happy with my rule changes. Though I will probably add a rally back for Cav and an evade or similar for lights. And those musket ranges are about twice what they should be. :)
Posted by David Cooke at 02:47