Eventually managed to test drive the Impetus rules using the Neil Thomas scenario No. 16 "Advance Guard" I added my usual random terrain, increased the size of the armies and tweaked the circumstances of the scenario.

The Egyptians and Canaanites are both attempting to secure an oasis in northern Sinai.
Each armies advance guard is approaching the oasis through poor visibility.
Neither army will be able to leave the road until one side has reached the oasis.
At that point the sand storm lifts and its business as usual. 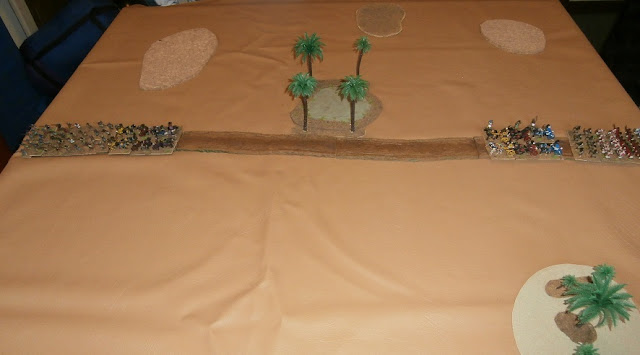 The Canaanite plan (on the left) was to secure the Oasis with skirmishers backed by
a band of light foot and use these to pick off the Egyptian heavier foot.
The Egyptian plan ( on the right) was to screen off the bottle neck between the soft sand and Oasis
with a small force, hook to their left with the Chariots supported by archers and
smash through the Canaanite centre with their spearmen. 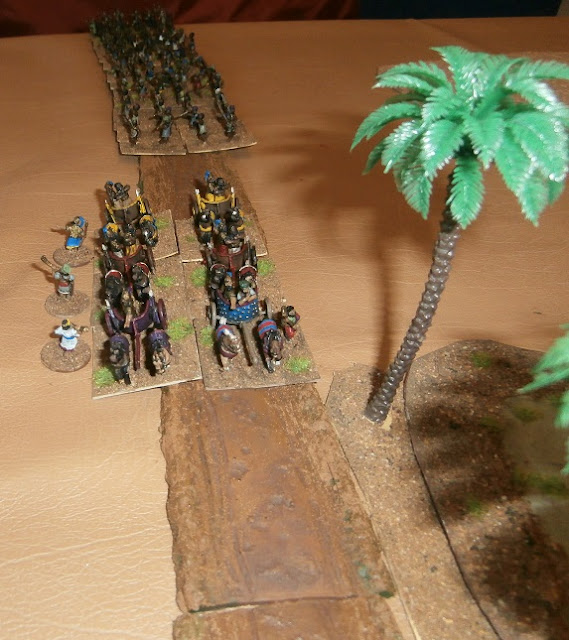 The Canaanite host reaches the Oasis. The Chariots have all been discorded by quick movement.
Unfortunately they are being lead from the front by their General! 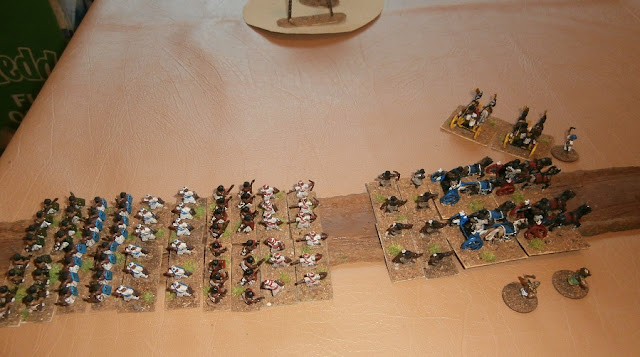 The Egyptians have also fallen into disorder attempting to race to the Oasis.
They also have accidently placed their General (Yellow chariots) at the front.

The sand storm has cleared and both sides attempt to shake out into a battle formation!

The Canaanite General (Purple) is in the lead and disordered.
But manages to shoot and hit the Egyptian General. First blood!
Chariots, in these rules do not manoeuvre very well in close confines. 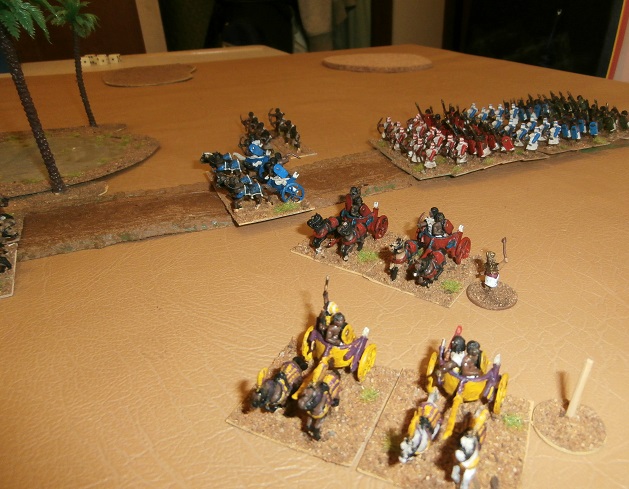 The Egyptian General (Yellow) has managed to get clear of the traffic snarl.
However A) he doesn't want to be on the flank and out of command and B) has already taken a hit. 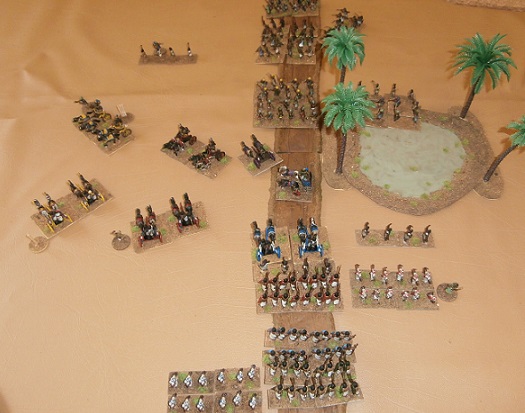 More chaos as both sides continue to spread out and arrows fly both ways. 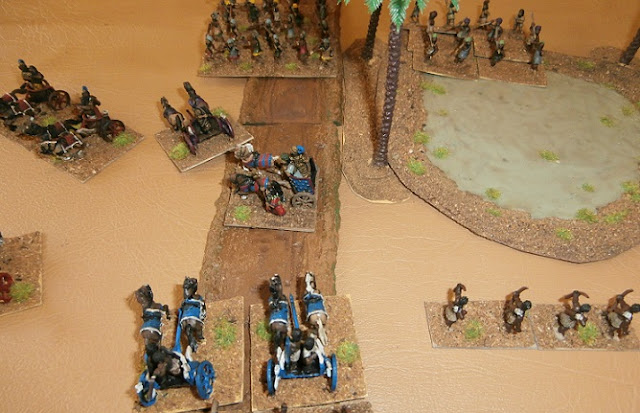 Accurate close range shooting by the Amun (Blue) Chariots and some Nubians Archers
wound the Canaanite General whose body guard rush from the field. A major blow! 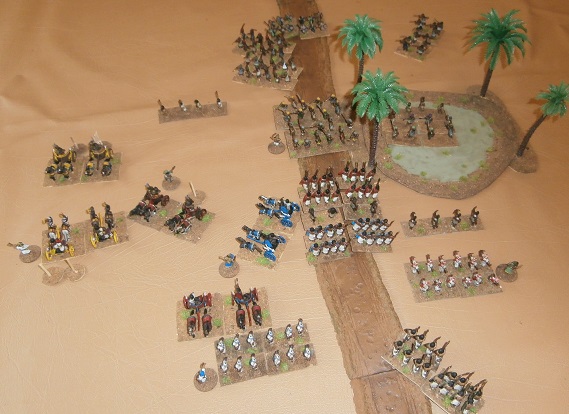 Disorder makers everywhere as both sides attempt to reorganise.
The Canaanites are missing a General which is already hurting. 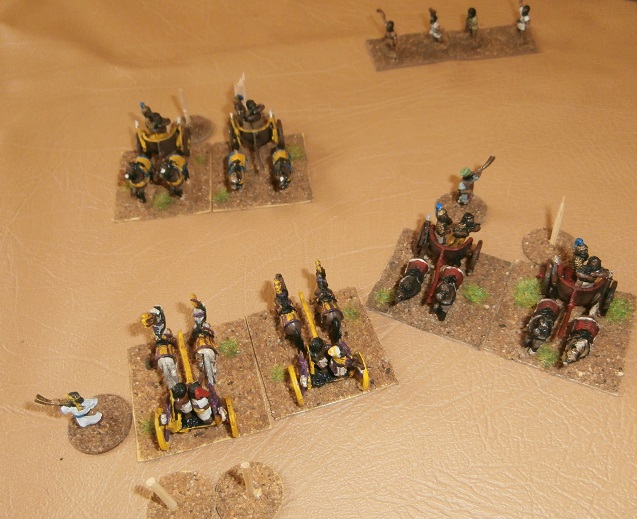 The Canaanite red chariots charge and force the Egyptian General to retreat.
He now has two casualties. 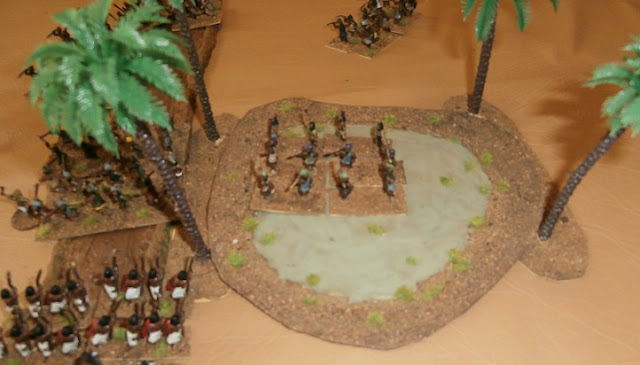 The Canaanites capture the Oasis. 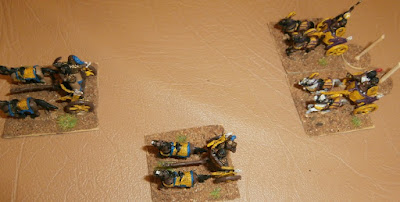 With an exchange of archery the Yellow Canaanite Chariots  decide to follow their General home. 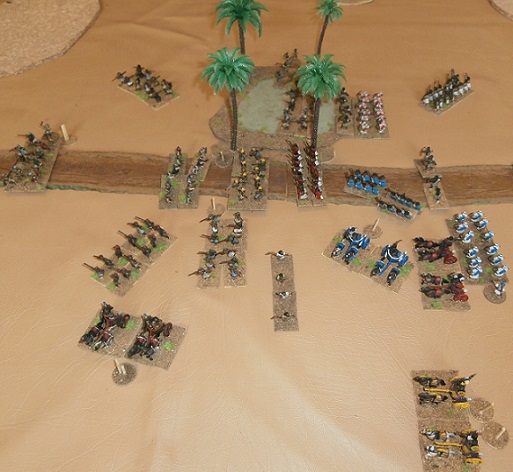 Suddenly the balance has tipped the Egyptian way on the open flank. 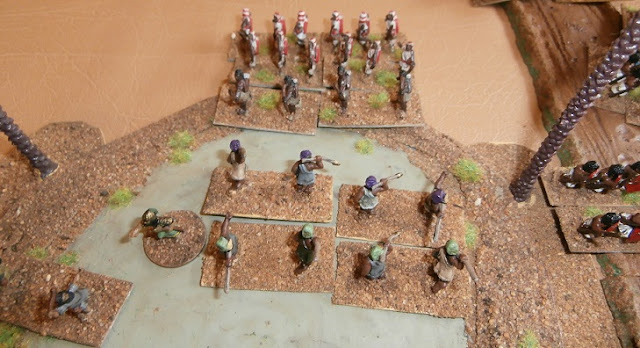 The Nubian Archers supported by the Egyptian Re Archers challenge for the Oasis. 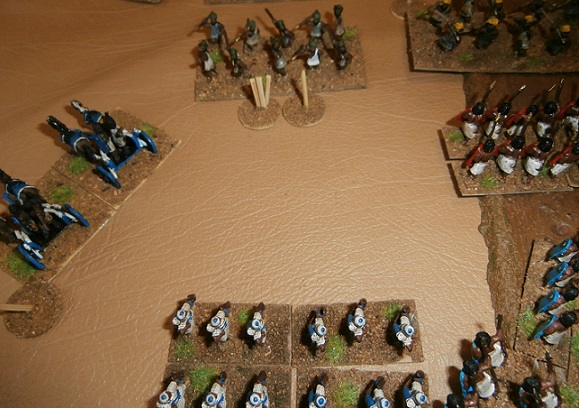 The Egyptian Amun Archers shoot at and routs the Canaanite Green band. 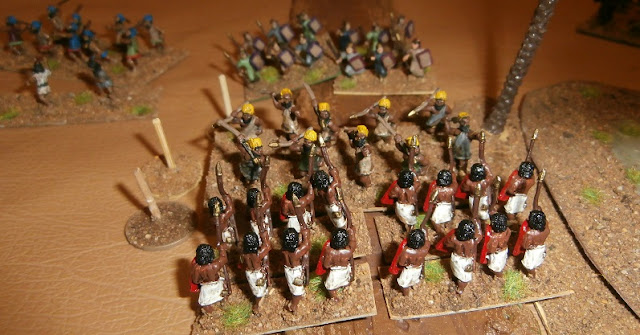 The Re Spear finally gets to grips with the Yellow Band who just melt away on contact. 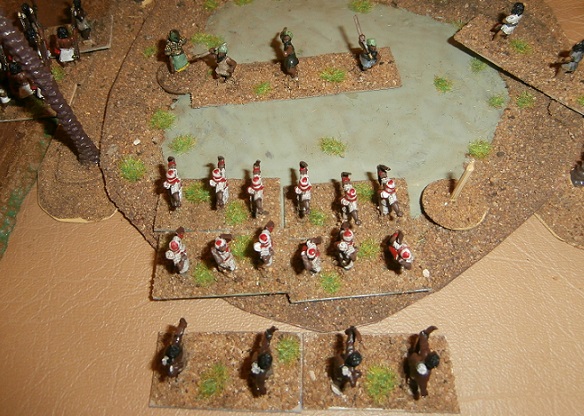 The Re Archers cause the Green Skirmishers to rout!
The Canaanite army is falling apart! 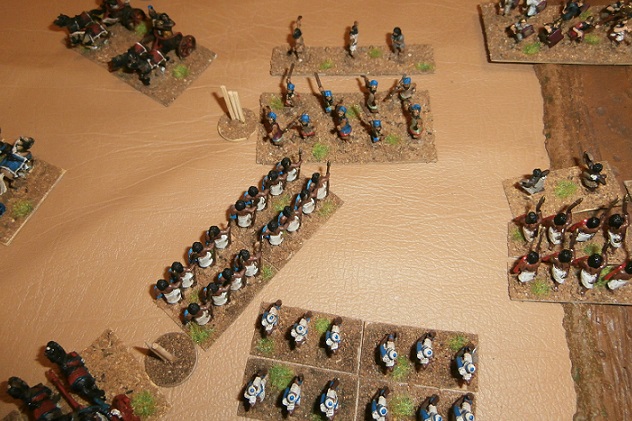 More grief as the  Amun Spear charge and disperse the Canaanite blue band!
Who at least manage to cause some casualties. 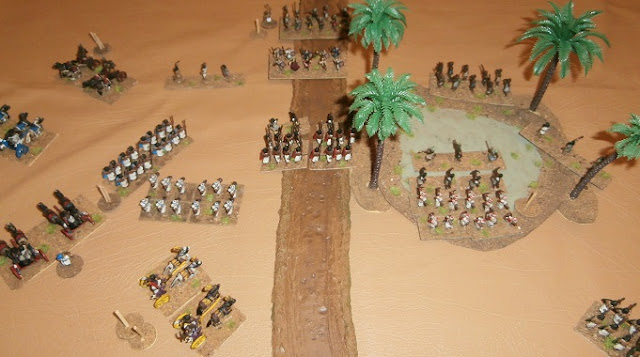 Suddenly the Canaanites are out numbered. 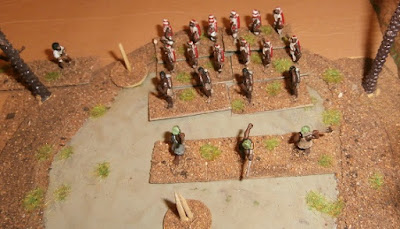 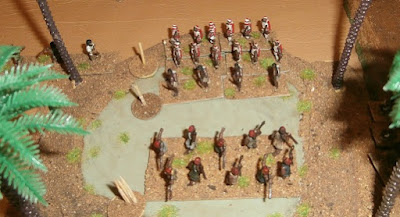 Desperate the Canaanites keep throwing units against Nubians and Re Archers.
Who just keep winning.

There was one final Chariot clash on the flank between the undefeated Canaanite Red Chariots
and the successful Amun Chariots. 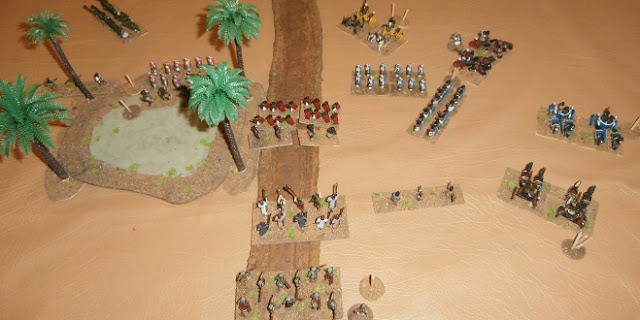 View from the Canaanites  side as their army breaks.
Victory to the Egyptians who I think have an advantage in this sort of close in fighting.

Man of the match to the unnamed Nubian Skirmishers.
They ended up with two routs and an assist. Not bad for skirmishers!

Basically the Canaanites were unlucky. Their Chariots lost an even fight and
they couldn't hit a barn door with their javelins!
I enjoyed the rules though there is a bit of a learning curve. Some of the things that seem a bit off
in the first read through make sense when your playing.
I even started converting my figures over to the new basing during the game.
Its so much easier to pick up a unit on one base!